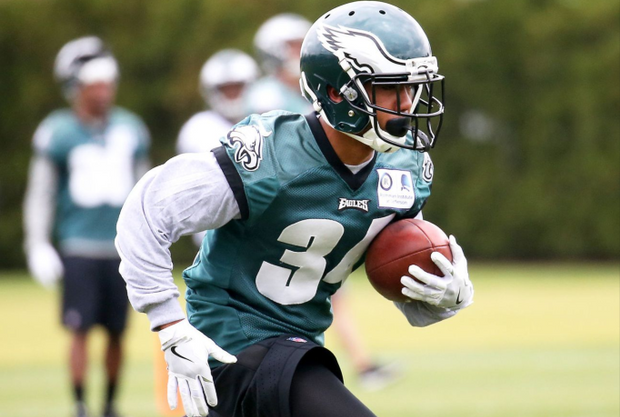 Many times the key to the a player’s career revolves around which team selects the player in the draft.  Sometimes a player may tremendous ability but not fit into the system of the team, which drafts him.  In the case of Eagles rookie running back Donnell Pumphrey, the Birds may be one of the four or five teams in the league, which employs an offense that will allow him to flourish.

The rookie running back told me that he has been able to play the game because he knows when to get on the ground and not take the big hit. I think this young man fits this offense.

At the end of the off season, he told me he feels good about learning and understanding the offense.  He is quickly picking up the team’s passing game and they are feeding him more and more of it each day.  Pumphrey has been learning to run routes out of the slot.  He seems to be a natural pass receiver.  He’s very, quick and smooth in running routes, making cuts and catching the football.  The young man just has a good feel for the game.

Even though he didn’t return punts or kickoffs in college, he looked very comfortable catching punts and kickoffs during the off season.  I watched him judge the kickoffs and punts in the air.  On each play, he would move into position and catch football coming forward on the move.  He looked like a natural out there.

Don’t get me wrong, I still want to see him get out there, get hit and get up.  Right now, I like his chances of making this team and playing a role in this offense because the Eagles are asking him to do things he can do.  If they were asking him to pick a 250 pound blitzing linebacker, I would have a different expectation.

Pumphrey’s competition on the football team is second year running back Wendell Smallwood, who showed he can run with the football, but doesn’t seem to have picked up the passing game as well as Pumphrey has in his rookie season.  Another possible running back, whom Humphrey will need to outplay is rookie free agent Corey Clement.  Like Smallwood, Clement is a better runner than pass receiver.

This will be an interesting competition to watch during the preseason.

Notes From The Phillies’ 5-0 Loss To Houston