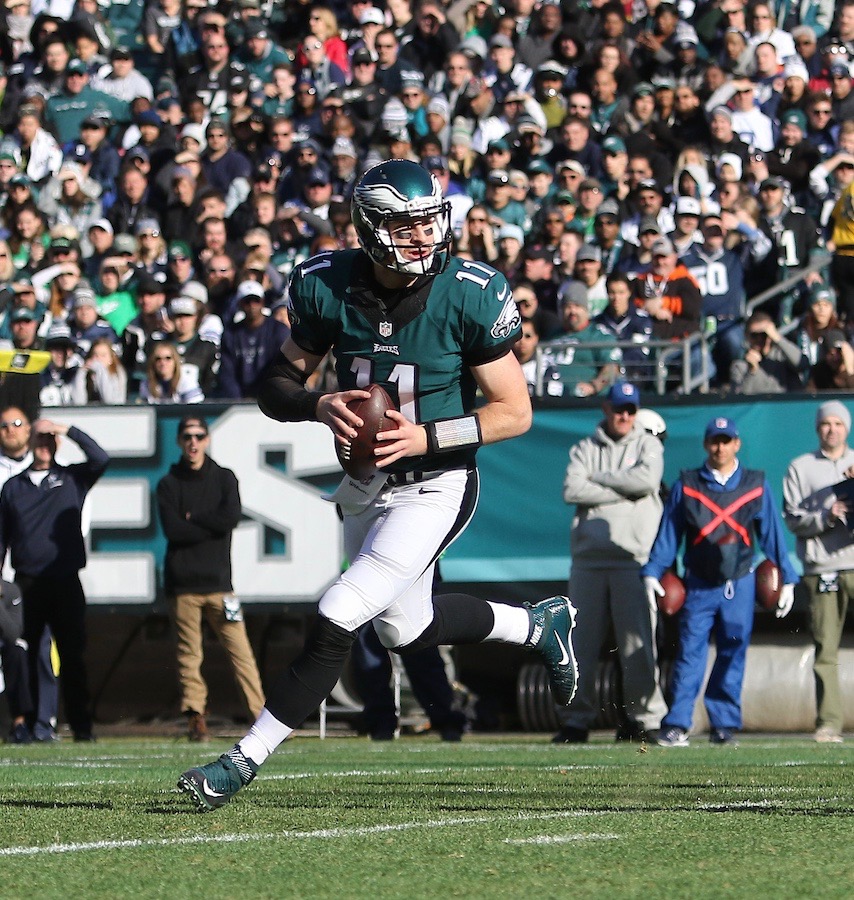 The upcoming season and the foreseeable future of the Philadelphia Eagles are both tied to the right arm of second-year quarterback Carson Wentz. Unlike training camp in his rookie year, when Wentz was a backup to veterans Sam Bradford and Chase Daniel, this year the North Dakota State product is running the show and will get the majority of the reps during camp.

I think the additional reps are a good thing, but the Eagles are going to make sure he doesn’t throw the football too much.  He’s working on a pitch count because Doug Pederson and his staff don’t want him throw so many passes before the season starts, that he goes into the season with a tired arm.

Everybody will be looking closely at the footwork of this young quarterback.  His throwing technique was very good at the start of his rookie season, but it fell apart quite abit, once right tackle Lane Johnson got suspended. Wentz seemed to lose his confidence and focus, as he started getting hit more and more by the league’s pass rushers. At the beginning of the season, he had been consistent on setting his feet about shoulder length apart and maintaining a short, compact throwing motion.

Unfortunately, as the season advanced, his throwing motion became longer and longer. He had the football starting lower in his passing motion, down near his waist. This meant it took him a longer time to get rid of the football. Wentz was unknowingly, throwing off the timing with his footwork. The longer throwing motion forced him to take a longer stride, when he threw. His passes tended to sail over the heads of the receivers, which resulted in the majority of his interceptions. Take a look at a reel of his interceptions on Reddit.

The best quarterback in Eagles history, Donovan McNabb was ridiculed by members of the media for the passes he threw into the ground.  If he missed a receiver, he would miss him low rather than high.  That habit is one of the reasons McNabb led the Eagles to so many wins.  Low passes into the ground are not a pleasant sight, but defenses don’t pick off those passes.  Most of the time, when passes are wild high, they get picked off and the team you’re quarterbacking loses.

The high passes are one of the reasons, the young quarterback sought help during the offseason from Train3DQB, a California based quarterback skills training organization, which has worked with the likes of Tom Brady, Drew Brees, Matt Ryan and Carson Palmer. Wentz wanted to get started ASAP working on his throwing motion and because of the NFL Collective Bargaining agreement, he couldn’t work with the Eagles coaches.

I also want to see if Wentz has improved his intermediate and deep throws. He does a good job of throwing the short pass accurately, but he needs to improve the 15 to 25 yard pass across the middle on seams, digs, curls and trail routes. Too many times the ball sailed when he tried to throw those routes, which are all 15 to 25 yards downfield. It’s a pass that you have to throw it over the linebackers but in front of the safeties. He has to put some air under it, but it can’t sail or it will probably be picked off by the safeties.

Decision making is a very important part of playing the quarterback position in the NFL and Wentz is usually a good decision maker.  Despite that, there were too many times in his rookie season, when Wentz let the football leave his hand despite not being confident it was going to be completed.  If during the play, he doesn’t feel good about the outcome, he needs to throw the ball away or take a sack.   Turnovers are a huge stat in a NFL football game,   Many times the turnover stats decide which team win and which team loses.   This is a very important aspect of his performance that he must improve.

The Eagles wide receivers and tight ends took a trip to Fargo, North Dakota during the early weeks of July in order to get in some work with Wentz, so I will be very interested in seeing if newly acquired wide outs Alshon Jeffery and Torrey Smith, are on the same page as their quarterback during the training camp workouts.

Wentz has the ability to throw a nice deep ball, but he can’t put too much air under it or it will give defensive backs a chance to recover.  He needs to get in sync with Jeffery, Smith and the other receivers on the timing of his deep throws.

This will be a Big Year for Wentz and the Eagles… He needs to take the Next Steps in becoming that Franchise QB & Leader of the Franchise .. He has all the Skills/Tools/Work Ethic/is Coachable/Leadership attributes to make it happen, now he just has to go out and do it and become more consistent and Win most of these Close Games to help get himself and the Team to the Next Level and back into the Playoffs
He must improve his core strength, quicken his release, stabilize his footwork and not scramble as much at the first sight of pressure and become more accurate with his passes which are all things he acknowledged and which he did something about it, which is work on these things during the Off-Season as G-Man alluded up above.. All these improvements won’t happen overnight or all at once during this Summer Camp/Pre-Season, but he does need to make some improvements in these areas and he should only improve as the entire Offense does with some of new weapons and players added, maybe a more consistent Running Game and better OL Play help make this transition all the easier. I don’t think it does Wentz any good to have to Pass 40 + Times Every Week .. Eagles Offense needs to take advantage of their BIG OL and the Big Back in Blount by wearing opponents down and then utilize the Playmakers versus a worn down Defense with the quick-striking, talented group of Sproles/Smallwood/Pumphrey.. Keep the chains moving with Jeffrey,Matthews,Agholor & Ertz in the intermediate plays and the occasional Big Play shot down the Field with Torrey Smith
There is a lot of Talent at the Receiver Position this Year for Wentz to grow with and there’s no reason that Wentz and the Eagles Offense shouldn’t be successful if they stay healthy ..

Wentz has to work on his accuracy and limiting the interceptions. I do not have a problem with his scrambling because he always kept his eyes downfield looking for a receiver ala the Steelers game TD pass to Sproles. Scrambles were caused by pressure…but I think Wentz showed good pocket awareness. He just has to sharpen his accuracy which I think will happen as he gets more reps and experience and develop chemistry with receivers.

Ehl..weapnry (air corps) and a fullback ,and hopefully a defense,that will give him field position..all the testubes in the lab are present..now lets see the cosch and he implement them..It will assuredy be a process..one i think we all feel might actually have xmas shoppers to flock to the stores..