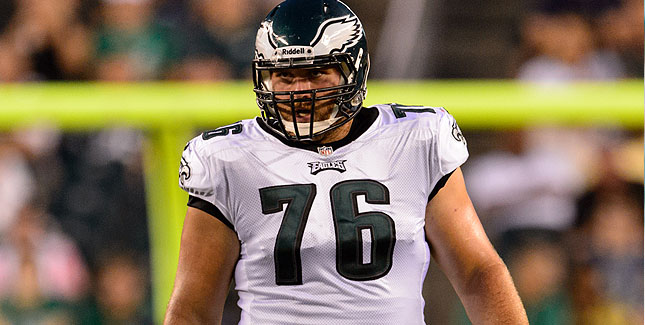 The Philadelphia Eagles made a bit of a surprising move on Wednesday, releasing veteran offensive lineman Allen Barbre.

Barbre had spent most of the last two seasons starting at left guard, and had previously provided the team with some versatile depth off of the bench since signing with the club in 2013.

Earlier in the week, the team named second-year guard Isaac Seumalo the starter at left guard, and apparently released Barbre to give him an opportunity to find a starting role elsewhere.

General Manager Howie Roseman did leave the door open for Barbre to return if he’s unable to find a suitable opportunity on the open market.

The Eagles’ offensive line position was a little crowded, and the addition of Chance Warmack and the resigning of Stefan Wisniewski made Barbre expendable.

I felt Barbre was a mediocre starter, and ideally a serviceable guy off of the bench that could come in and play multiple positions if needed. I don’t like the idea of the Eagles parting with quality depth, but unlike previous seasons, depth really isn’t a big concern for them on the offensive line this year.

Obviously not a hair on fire. Headline. Slow summer duldrums…really excited, however to stare down the year 2 of the wentzlla era…weaponry and stability will be a key..ill be watching the other side of the ball, hopefully with a pressure pass push and how swartz implementation of the new back end..All the one year and” show us” deals are in high focus..im not drinking any kool aid as vegas at 9 wins , attests..The coach has toys now at his disposal. .lets see the transformation. .go birds!

Hey DE, Hope your Summer has been going well.. How about the Job Tony Larussa has done in rebuilding the Arizona Diamondbacks into a Playoff Contending Team kind of out of nowhere too…

I think the Cardinals will be heading into a Decline and they need to get Younger at QB and Fitz is another Year Older.. They have lost some leadership on that Defense the last couple of off-seasons.. Just not the same Team..

Pman. Not a dback guy. And yeah i hear cards are not the. Preferred bird as you know. Im hot 120 daily but “its a dry heat” take care .see you chimp at the boone zoo..soon

The Boone Zoo is Closed, they Built a Micro-Brewery in it’s Place…
Hiking Season is just Starting for me as I’ve been going to a different Hike/Trail on Sunday’s to get my Steps In
Went to Elk Knob Summit Trail last Week, Sim’s Pond Trail the Week before
and going to do the Bell Firetower Trail this Weekend …

No Surprise here and frees-up some $2.1 Million in Salary Cap Space.. .
Issac Seumalo has been named the Starter at LG with Chance Warmark and Steve Wisnewski as the Back-ups at Guard/Center

Reserves will be Chance Warmack, Steve Wisnewski, Big Vatai for sure and
then maybe 1 More from a bunch of Players (Dallas Thomas, Josh Andrews, Matt Tobin or Dillon Gordon who they seem high on due to his Versatility)