Video: Carson Wentz Talks About Benefits of A Balanced Offense 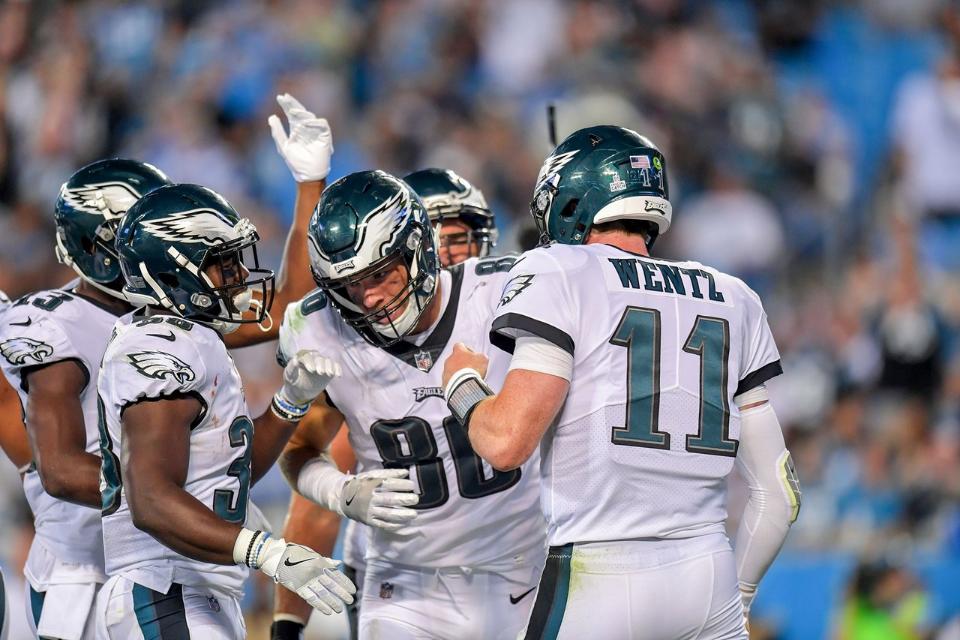 The Eagles offense isn’t built on one or two weapons and that makes it difficult to stop because the defense doesn’t know which of their weapons are going to be featured from week to week.  From game to game, the leading weapons change.  In one game Doug Pederson and Carson Wentz might decide to feature tight end Zach Ertz as the main pass catcher, taking advantage of a one-on-one matchup against a linebacker or safety.

In another game, Wentz will be trying to exploit a weakness in a coverage or a defensive back by throwing the ball deep to Torrey Smith or Nelson Agholor.  They may decide to feature the big and physical Alshon Jeffery against a defensive back who is on the small size and not interested in tackling.  Rookies Mack Hollins and Marcus Johnson have been utilized in the key areas with their speed to get deep and the size to work the middle of the field.

Of course the running game, they can always decide to give the ball to LeGarrette Blount and let him pound a defense up the middle or on the corner.  Wendell Smallwood has been effective running outside or up the gut, as well as running screens to keep the defensive honest.  The third back, Kenyon Barner has also chipped in with his running and pass catching ability.

Video: Wentz & Cox Tell Us That The Eagles Are Still A Hungry Team

I usually don’t go to night games but Carson Wentz is can’t miss QB action. Eagles’ nailed this selection. Headed to Chinatown in Philly first to eat dinner then the game. Praying the freaks don’t drink all day and are bearable but my past experience suggests fights and rude behavior, all alcohol related. Please Jeffery ban alcohol in the parking lot.

Eagles have been starting strong the last few years defensively but right around this time of the year the turnover advantage they’ve been enjoying dries up. Here’s hoping the bird’s win the turnover battle tonight, at least don’t commit any costly interceptions or fumbles.

Love
Me
Some
Meh

This guys an animal and ertz his Dallas Clark. Shits getting insane

Can the mortgage the future dummies step up,,mmjust say it,

That Houdini scramble had me butting in my pants…..we got us a top 3 qb probally probably mvp

Don’t want to be a Debbie downer but losing hicks and Peters is huge, I think vaitai is good at tackle but we need Howie to trade for lb asap walker and Goode are horrible

Z your right, Goode is not Goode & walker isn’t either. Getting back Kendrick’s will help….but. I read where they worked out Jelani Jenkins, Sean Spence & Donald Butler. Idk if they have anything left, or ever had anything to begin with, but backs & te’s were open all game tonight. By the way, wentz is in complete command. A good dude, a great athlete, smart, driven and most of all a winner. So much for all the Ryan Tannehill comps I read on this site, carson is legit.

Only 1 comp from tsbsjohnson, she has disappeared as most trolls do……i call him big Aaron rodgers

She’s not a real Eagles fan. That’s become quite clear…how do you let the last two victories go by and not post anything…lol…frauds exposed….”MEH”.

What a fucking idiot

Love me some meh

In other news so I Guess Alshon ain’t coming back? He don’t make plays