Video: Three Costly Plays Vs. Seahawks, That Must Be Corrected 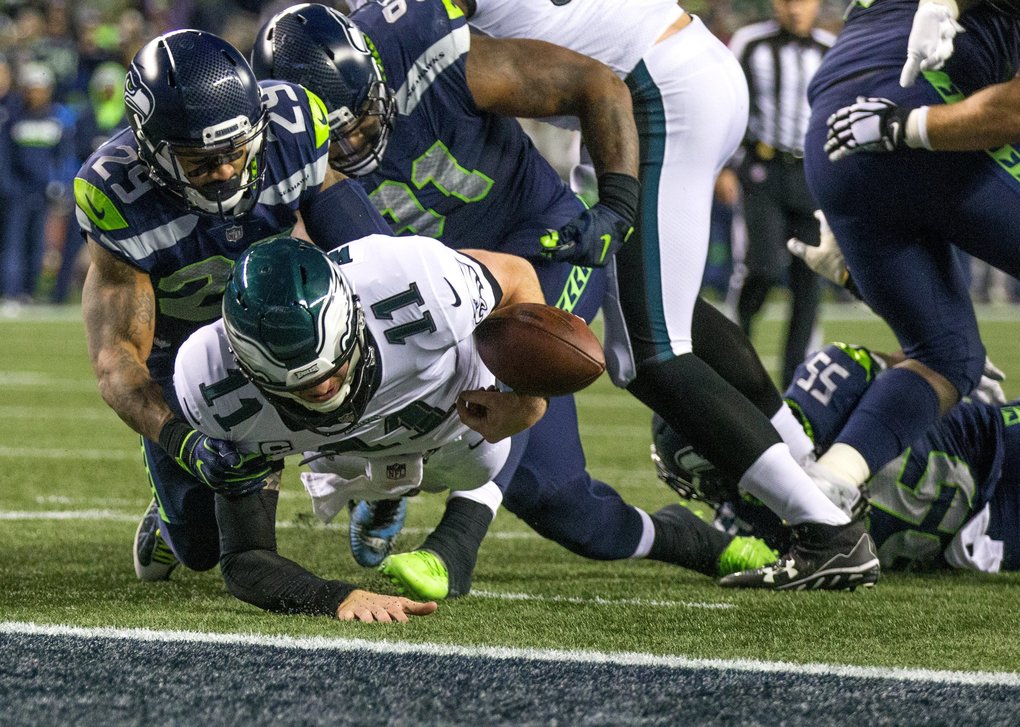 I’m highlighting three plays which occurred in the Seattle game that must avoided in the upcoming contest against the Rams.

The first play which I single out is a play involving a LeGarrette Blount 12-yard run in the red zone to the Seahawks four-yard line.  The run would have set up a probable Eagles touchdown, but wide receiver Alshon Jeffery was called for holding.  It was a careless play by Jeffery because he had his hands out on the shoulder pads of the cornerback.  They did get a field goal, but the penalty cost the Birds four points.

On another costly play, Carson Wentz overthrew a wide open Nelson Agholor.  The Eagles slot receiver ran a deep crossing route and was all by himself on the right side of the field, but the Wentz pass sailed over his head.  It would have been a sure touchdown.

The other costly play also involved Wentz, when he fumbled on the one yard line and the ball rolled out of the end zone.  It was a touchback, which meant the Seahawks got the ball on the 20-yard line.

Going into the Rams game, the Birds focus must be sharper. They’ve got to have the ball tucked away when they’re carrying it in order to eliminate any turnovers, especially turnovers in the red zone.   They must avoid holding penalties and complete passes to wide open targets.

I expect Wentz, Jeffery and company to come through with a strong performance against the Rams.  This is a mentally-tough team, so I think they’ll be able to identify their mistakes then correct them.

important playoff bye week game this Sunday with home playoff field implications. Not a do or die game but it would be nice to reassert their supremacy in the conference playoff pecking order.

3 things stop running fucking Blount and run Ajai and Clement. Warmack comes in game and gives up sack why is he on team and stop throwing the ball to Torrey Smith he stinks.

Important win in LA, probably with referee help. Quite of few friendly yellows for the eagles.
Wentz limped off the field and the news doesn’t appear to be good for the rest of the season.
I half expect to hear from Songs now that Foles may be the starting QB for the foreseeable future. Songs and the crew demanding Eagles sign Kaepernick if Wentz lands on the IR list – bwahahahaha

A. Foles is garbage
B. Krap has won and with our rbs the run game could be sick
C. Our locker room strong enough to support him
D. We have enough weapons were he could be solid
E. This country needs him back. Fuck conald trump, need someone with enough balls to do something or say something.

I hate krap , hate his previous stances (mostly ruined by pig socks) , hated his game but foles is garbage

Maybe we can get a miracle and get panthers round 2 and rams for nfc championship game ?

Idk if wentz done for reals we probs r too

This was a real heartbreak!