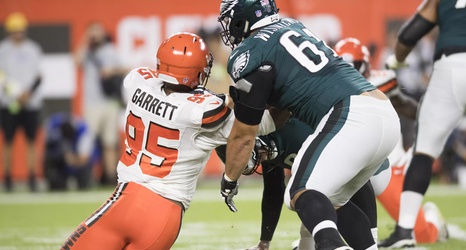 Another Reminder That The Preseason Means Nothing

The Philadelphia Eagles lost another meaningless football game on Thursday night to the Cleveland Browns 5-0. There were sloppy plays, mistakes, turnovers, even a missed field goal.

Are people going to get all worked up over what happened tonight? Absolutely. Should they? Absolutely not.

I’m sure even remembers Week 3 of the 2015 preseason right? The game where the ultimate fraud of a quarterback Sam Bradford set the world on fire with a picture-perfect performance against the Green Bay Packers?

How did that translate to the regular season? The Bradford from the preseason game was never seen or heard from again, and the Eagles turned in one of their most disappointing seasons in recent memory.

The same folks that got all worked up about Bradford that night telling anyone that would listen that the Eagles were a lock for the Super Bowl that year and touting the good old “In Chip We Trust” nonsense are the same ones that will tell you the sky is falling, Foles is a fraud, and the 2018 season is already over tomorrow.

There was no Jason Peters, Alshon Jeffrey, Nelson Agholor, Jay Ajayi, Corey Clement, or Darren Sproles on the field tonight. Those are six HUGE pieces of the offensive puzzle.

Preseason is a time to work on things and identify problems so that they can be ironed out for when the games matter.

That’s not to say that some of the individual players are above criticism for how they performed tonight, but rather in the big picture, these games don’t matter.

Starting Defensive Jobs To Be Settled On Thursday

People are having anxiety issues due to the Eagles offensive (literally and metaphorically) performance last week and last night. I’m not the slightest bit worried. Their performance must be put into context, The top 3 wr’s and rb’s did not play, the o line struggled, especially Vaiti, I think game planning will help that. Nick Foles…well he’s that box of chocolates..I think Wentz will start the season so not too concerned there. The offense was rather vanilla once again so once the game plan is implemented for the season opener, teams will see a much different Eagles team than what has displayed this preseason.
It’s funny how other fan bases are counting us out already.

I’m only worried from the injury aspect. A lot of guys are banged up and going through surgery / rehab.

They haven’t played, and barely practice in the offseason if not at all.

How much will that throw off timing?

In terms of Nick Foles. The two interceptions were bad. Yes. But so was the Matt Jones fumble that destroyed a drive, and his job.

The fumble by Foles wasn’t all his fault either.

Nick made some damn good those, with some bad ones. When eagles get healthy, he’s going to be fine and turn it on week 1