Starting Defensive Jobs To Be Settled On Thursday 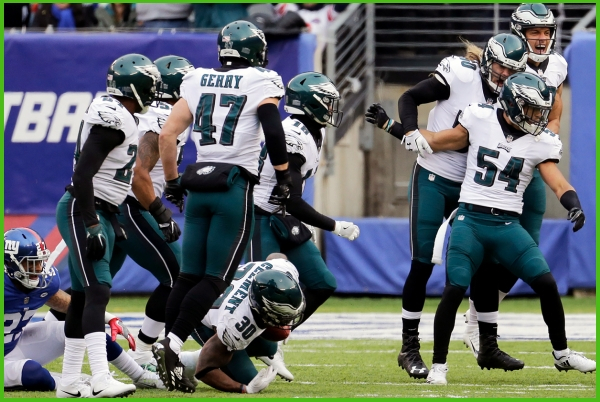 There are two starting jobs on the defensive side of the ball which Eagles defensive coordinator Jim Schwartz hopes will be decided on Thursday night against the Cleveland Browns.  He wants to be able to come out of the game with a clear picture of who will be the team’s defensive starters.

First of all, you have cornerbacks Avonte Maddox and Sidney Jones battling for the starting nickel or slot corner spot.  This is a very important position in today’s NFL.  Unlike defenses when I played in the National Football League, current NFL defenses are in nickel or dime much more than they are regular defense with three or four linebackers on the field.  The nickel or slot back is on the field 70 to 80% of the time.  He has to be able to play well against both the run and the pass.

Although he’s small compared to defensive linemen and linebackers, he’s got to be willing to come up and throw his body in the path of one, two or three 330-plus pound offensive linemen, who are pulling on a sweep.  There can’t be the smallest amount of unwillingness to do that assignment.

At the same time, they must be able to run, stop and change direction with the quickest receivers in the league.  He must have both speed and quickness.  This is a special position and the nickel or slot back is on the field in nearly all of the big plays in the game on 3rd down, 4th down, two-minute drills and in the red zone.

Last season, Patrick Robinson did an excellent job of playing this position and it’s one of the reasons, the Eagles won the Super Bowl.

Maddox and Jones, who have had outstanding training camps, both played poorly against the Patriots.  If one of them had shined, they would likely be celebrating the clinching of the position, but unfortunately that didn’t happen, so now it’ll all be the line on Thursday.

Maddox, who is a rookie has been surprising with his savvy and competitiveness.  He’s built like a classic slot corner at 5’9″ and weighing 180 pounds.  The young is fearless when it comes to attacking the run when he recognizes it. He’s willing to tackle and hit like he were a linebacker.

Jones has the same qualities, but he’s taller at 6 feet and 181 pounds.  He’s got elite speed and quickness, as always seems to have a habit of getting his hands on the football.  Jones is so talented that the Eagles must find a way to get him on the field.

The other position that hopes to be settled on Thursday night, is the weak side linebacker spot or the linebacker away from the tight end.  Nate Gerry and Kamu Grucier-Hill continue to compete for that starting spot.  I personally think Grucier-Hill is the better football player, but he’s expected to be the Birds number one special team player, so Gerry is likely to get the linebacker position.

Grucier-Hill is a converted safety with elite linebacker speed at 4.4 seconds in the forty-yard dash.  He makes big plays versus the pass, which is what defense in the NFL is all about nowadays.  Gerry is solid versus the run and the pass.  He’s also a converted safety, who has put on 20 pounds to be a NFL linebacker.  I think he’s got a outstanding future ahead of him because he’s smart with solid techniques.   I can see him out there properly anticipating plays.

The Eagles anticipate Grucier-Hill making more of an impact as a special teams performer than playing those 20 to 30% of the defensive plays.  I agree with them.  The third linebacker position is no longer a starter in the NFL.  It’s not a vitally important position.  It’s about as important as the fullback position on the offensive side of the ball.