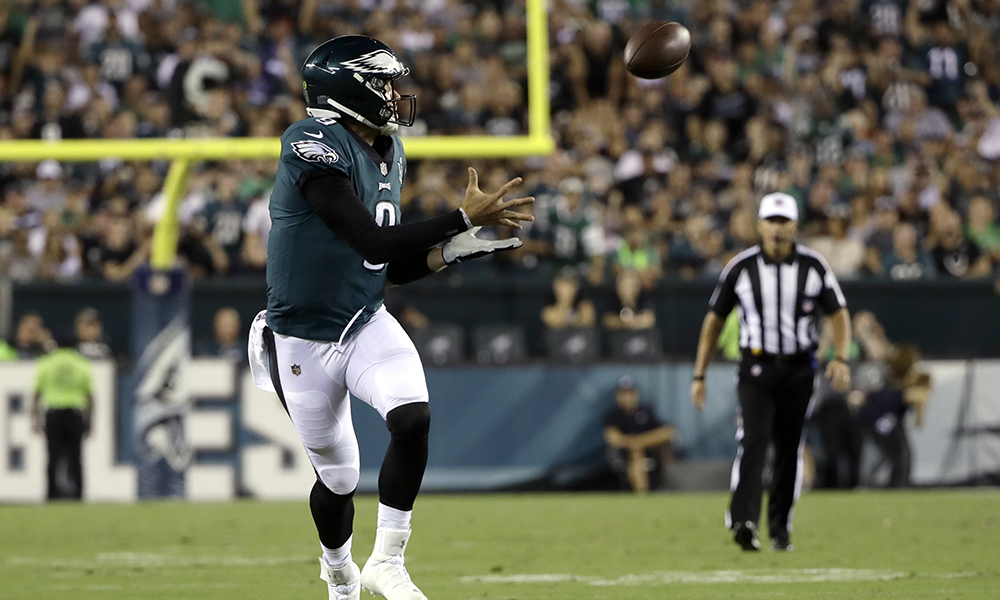 It’s scary just how much the season opener mirrored the NFC Divisional Playoff game last January. A low-scoring, defensive battle that came right down to the wire. Holding a six-point lead with just over two minutes to go, the defense had to overcome one last ferocious drive from the Atlanta Falcons.

Once again, a final throw in the corner of the endzone to Julio Jones fell incomplete, and while this wasn’t a playoff game, this was an enormous win to start the season that could have major playoff implications later in the season.

The defense was challenged early and often, and did a tremendous job keeping the team in the game while the offense struggled.

Jim Schwartz’s group held on a goalline stand to open the game, and held the Falcons to a pair of field goal opportunities on their other scoring chances.

The group gave up their only touchdown on the night after they were spotted a short field by a Nick Foles interception.

The Eagles really overcame a lot in this game.

They committed 11 penalties for over 100 yards. They overcame a flurry of bad mistakes, including a silly turnover on a punt (another mirror image from the playoff game). They overcame playing without key pieces like Carson Wentz, Alshon Jeffrey, and Nigel Bradham.

The Eagles showed the same fight and character tonight that they had during their Super Bowl run. In spite of everything that went wrong, the team never let adversity get to them, and kept coming out and fighting every play.

Just look at the final sequence of the game. The Eagles had to stop the Falcons on fourth and goal twice because of a silly penalty, but we’re still able to find a way to get it done.

They now start the season with a solid victory against a key opponent in the NFC. They have the benefit of some extra rest before their road trip to Tampa Bay. They can continue to build and improve on what they’ve done so far, and clean up what they did poorly in this one.

Eagles Will Feature Their Tight Ends And Running Backs

Eagles Defense Comes Up Big In The Red Zone

I really miss the community on that site. It’s ashamed what happened to it.

Great win tonight boys! WE TRIED TO GIVE IT AWAY, but they just wouldn’t take it LOL!!

Nick Foles needs to start the whole season. Not only was the game very similar, along with how the ending went , but Nick Foles got hot, and found his confidence as the game went on, just like last years playoff game

… we also muffed a punt, just like last years game…

The interception, just like the one in the super bowl to AJ was not his fault.
Welcome to the nfl moment for Dalas Goedert

Oline found its groove as the game went on and we were able to get that running game going.

Start the man, and let Wentz chill the whole season. Zero reason to rush a 25 year old when you have a QB of Nick Foles caliber

The MVP IS A stone cold killer

Glad to get out of that game with a win. I expect Nick Foles to play better as he continues to get snaps/reps.

The defense balled out and repeatedly bailed out the offense. Our d line is nothing to play with. Once our offense gets it together the Eagles are going to be a force to reckon with. If the offense can match the intensity of the defense, and Carson gets back in time enough, I see no reason why the Eagles can’t get back to the super bowl.

One observation yesterday we can all relate, is Atlantas red zone Offense, reminded us of chips inept attack.

Any win without your Franchise QB and #1 Wideout is a good win. Next up Tampa.

I miss the activity on this board too. Unfortunately I think a lot of the activity was fueled by the trolls bantering about the QB position. People like TS Johnson and koolbreeze were not Eagles fans..moreso trolls who were Mike Vick fans. After the QB issue was settled with the drafting of Carson Wentz, a lot of the discussion here went away. Then personal attacks drove others away. This site has to be built back up, the technology needs to be advanced too with real time up to date posts..you should not have to keep refreshing the board to get new posts and see updated responses. There are so many other sites that incorporates this technology which makes the discussions so much easier and fun. I’ve stated this directly to G.Cobb on this board but there’s never any response. I think it would help if G and Denny would be more available to interact with the users of this site during some of the chats.