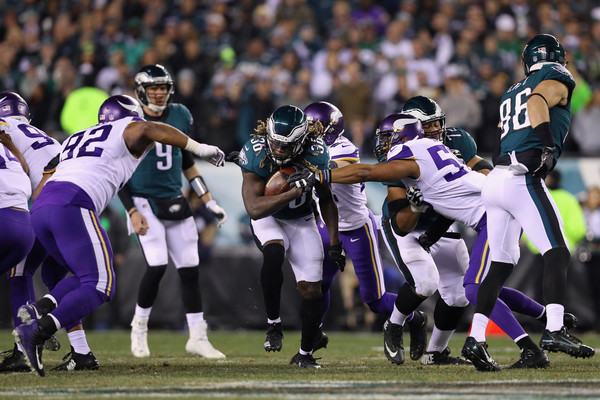 We just learned that Eagles running back Jay Ajayi tore his ACL in the battle against the Vikings and has been placed on Injured Reserve by the Birds.  That means he’s done for the season and he’s probably played his final game as an Eagle.

Ajayi has had a knee problem for a while and it’s something that has plagued him during his NFL career.  Word is that the running back has had a bone-on-bone situation in his injured knee for quite some time.  The hard running ball carrier was given a day or two off from practice each week because of his ailing leg.  He’s in the final year of his contract with the Eagles, so his chances of returning for another season here in Philadelphia are very slim.

This season Ajayi has carried the ball 45 times for 184 yards, which boils down to 4.09 yards per carry.  He has scored three touchdowns this 2018 season.

Ajayi was a big boost to the Eagles running game a year ago.  His ability to run down hill was a big shot in the arm for the Birds, as he helped them win a Super Bowl Title.  Unfortunately, I’m not sure what the future holds from him here in Philly.

Fletcher Cox Was Right In Dustup With Jalen Mills

They better sign a guy who can block, or 11 is going to get the snot hit out of him.