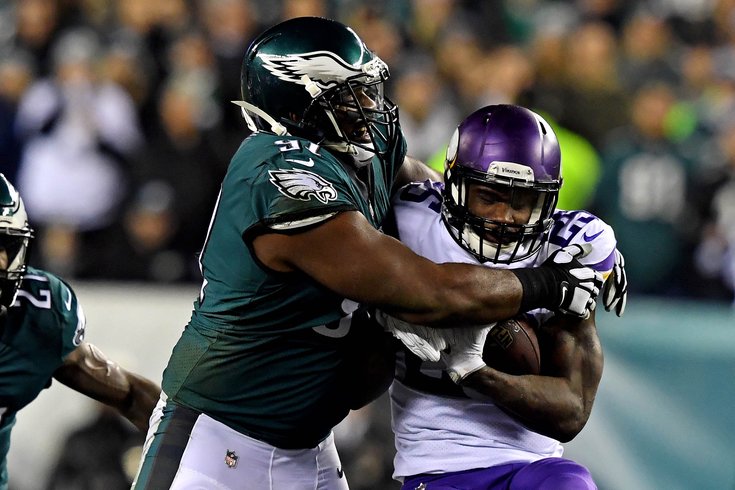 According to Adam Schefter and Chris Mortenson of ESPN, the Eagles have restructured the contract of All-Pro defensive tackle Fletcher Cox.  This move has freed up $6.5 million dollars of cap space for the Birds this season, but the report claims the freed up money will not be used to pursue Pittsburgh Steelers running back Pro Bowl Le’Veon Bell, who has been holding out for the entire season.

“There are only two backs the Birds will definitely have for Thursday night’s game against the Giants and they are inexperienced third-year back Wendell Smallwood and undrafted rookie Josh Adams.”

That’s a surprise to many including myself that the extra money under the cap will not be used to acquire Bell because the Birds have severe needs at the running back position.  The Eagles just loss Jay Ajayi, their number one running back for the season.  Ajayi tore his ACL on Sunday during the loss to the Vikings. They have also been playing without second-year running back Corey Clement, who has been sidelined with a quad injury as well as veteran Darren Sproles, who has been sidelined with a hamstring injury.

There are only two backs the Birds will definitely have for Thursday night’s game against the Giants and they are inexperienced third-year back Wendell Smallwood and undrafted rookie Josh Adams.  Smallwood has done a great job for the Birds during the absence of Sproles and Clement.  He’s run the football with great drive and determination, as well as coming down with a key touchdown catch versus the Vikings.  Smallwood has carried the ball 25 times for 150 yards, which is a six yards per carry average — he ran for one touchdown and caught another.

“I do expect the Eagles to sign a running back or two in the near future.”

Adams has also played well when given the chance.  He’s a big back out of Notre Dame, who has carried the ball seven times for 29 yards.  He broke off a 16 run against the Indianapolis Colts. The injuries will likely give him a chance to carry the football on Thursday against New York.

The Birds hope to also have Clement, who was listed as questionable for the Minnesota game, available for their battle with the Giants.  The second-year back out of Wisconsin, is definitely needed because of his versatility.  He’s both a good ball carrier as well as talented receiver out of the backfield.

I do expect the Eagles to sign a running back or two in the near future.  I don’t expect them to continue the season having only two healthy running backs.  There have been reports of the Birds talking to Arizona about David Johnson and to Buffalo about former Eagles LeSean McCoy.