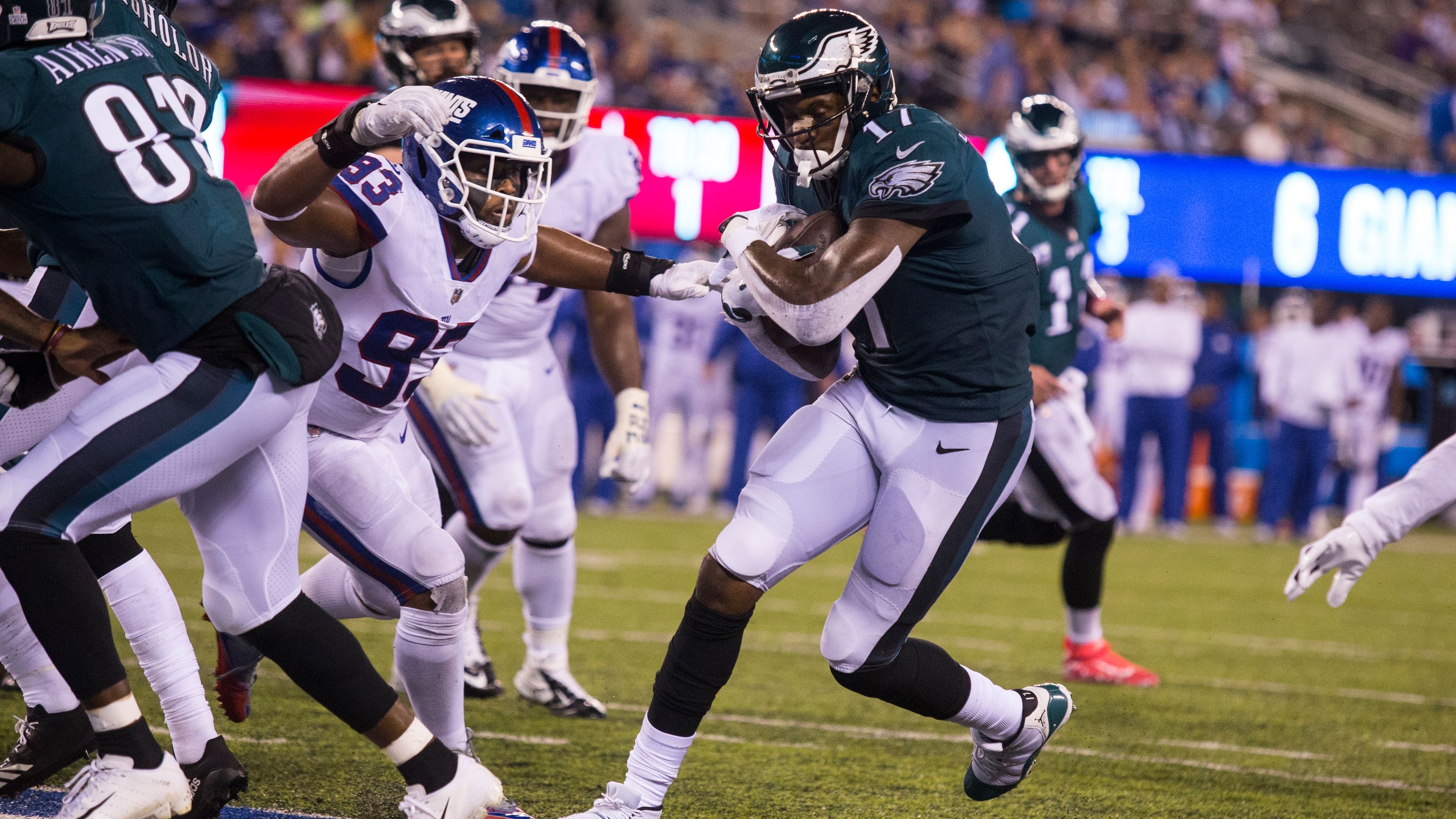 It was the Eagles defense that made the first play which set the tone for the night.  Eagles middle linebacker Jordan Hicks, who is one of the best pass coverage linebackers in the NFL got his hands on an Eli Manning pass, tipped it up in the air and his fellow linebacker Kamu Grucier-Hill picked it off and put the Eagles offense in position to get an early score.

Eagles quarterback Carson Wentz hit wide receiver Alshon Jeffery in the end zone on third down for the score.  It was the kind of play that a franchise quarterback makes.  Wentz dropped into the pocket on the play and nobody was open, so he extended the play by rolling to his right.  After a split second, he spotted Jeffery crossing from the left side, so he broke a passing rule about not throwing back across the field.  He threw an accurate dart and Jeffery was able to make the catch. It put the Eagles up 7-0 and they never looked back.

Wentz and Jeffery were a big part of the Eagles offense.  Jeffery ran routes like a bully against the Giants defensive backs last night.  He used his size and strength to create space for himself.  Wentz looked to him when he was trouble or to his other favorite target, tight end Zach Ertz.  Jeffery was dominant in the game as he caught 8 passes for 74 yards and two touchdowns, while Ertz caught 7 passes for 43 yards with one touchdown.

Wentz seemed to be in control of the game as he sliced up the Giants secondary.  Despite constant pressure on him while playing behind an offensive line with two ailing tackles, Jason Peters and Lane Johnson, then two inexperienced tackles in Big V and Isaac Seumalo,  Carson had a 122 passer rating while completing 26 of 36 passes for 278 yards and three touchdowns.

I think the one quality Wentz has that gets the least of attention is his toughness.  He can get hammered yet on the very next play, he will look down the barrel and stand strong in the pocket.  Eli Manning on the other hand, could get sacked by the shadow of a pass rusher.

The fast start was the key to this victory for the Birds.  In the first five games of the season, the Eagles hadn’t been able to score 24 points in any of those contests, but in their battle with New York, the Birds scored 24 points in the first half.  This is the team that we expected to see at the beginning of the season.

The game was really all but over in the first half as the Eagles built a big lead and in the second half, it was just a matter of playing out the time as the Giants had no answer.  It was a win that the Eagles desperately needed because now their record is 3-3.  This win along with the nearly week and half off they have before playing the Carolina Panthers, could be the remedy that they need to get on a roll.  They’ll have the chance to get healthy and they desperately need the time off.

Don’t get me wrong, beating the Giants is nothing to write home about because they’ve got an awful football team. They’ve got talent as we saw with former Penn State running back Sequon Barkley, but the lack of effort we saw at times was pathetic. Their offensive line is horrible and Eli Manning need to retire.  Pat Shurmur needs to lay down the law with that football team and that should start with a talk to Odell Beckham because he is a poison.

The Eagles Started Fast Led By Their Franchise Quarterback