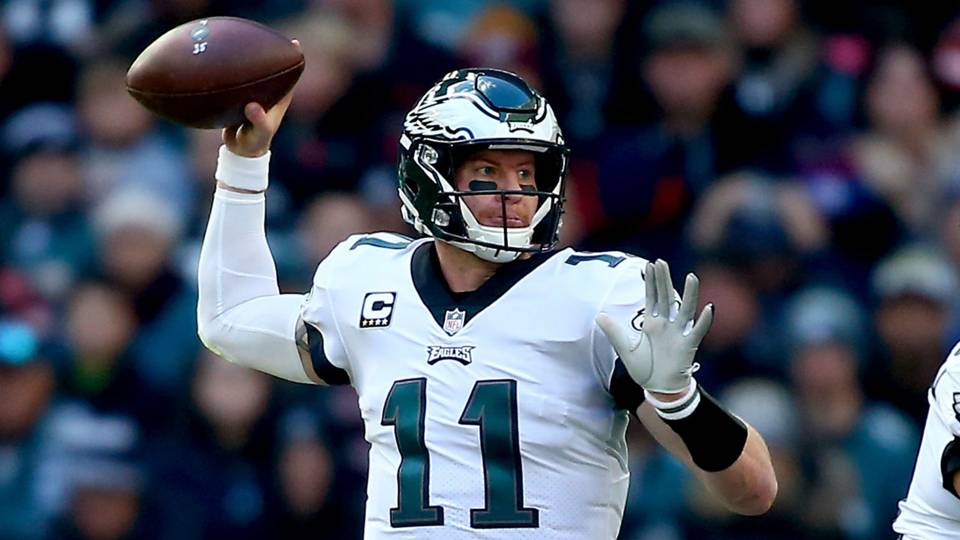 It wasn’t pretty, but the Philadelphia Eagles survived a trip across the Atlantic Ocean to get to 4-4 with a critical win over the Jacksonville Jaguars.

After a slow start filled with turnovers by Carson Wentz, and injuries littered throughout the roster, the Eagles were able to find a way to make plays against a great defense, and close out the game with a 24-18 victory.

Playing against the tough Jaguars defense, Carson Wentz put up 286 yards and three touchdowns. It wasn’t always pretty for Wentz (more on that below), but he got stronger as the game went on.

Defensively, Jim Schwartz’s group did a lot of bending, but not a lot of breaking, holding the Jaguars to just one touchdown and four field goal attempts on the day.

Carson Wentz Needs To Get His Turnover Problem Under Control

Carson Wentz has done a horrendous job at protecting the football in 2018.

“[A problem with the] Eagles’ offense… is that they’re very fixated on generating big plays. However, this leads to Wentz holding on to the ball too long.”

And on Sunday, two more terrible turnovers plagued the young quarterback. Wentz fumbled on the opening drive, setting up a Jaguars field goal, and threw a terrible interception in the endzone on the team’s second drive to wipe away an opportunity for points.

The interception to Jalen Ramsey was particularly awful, Wentz tried to force a pass to third-string tight end Josh Perkins that was never open, with Ramsey jumping the route for the easy pick.

A problem with Wentz, and the Eagles’ offense in general, is that they’re very fixated on generating big plays. However, this leads to Wentz holding on to the ball too long. On the play where Lane Johnson was injured, the injury might have been avoided if the quarterback had gotten the ball out quicker.

Wentz has now lost five fumbles and thrown two interceptions in his six starts, averaging over a turnover per game. That’s just not acceptable. The Eagles were able to overcome it today, but those are valuable points left on the field that will cost a team a win more often than not. Wentz is better than that. It’s time he starts playing like it.

The bye week couldn’t come at a better time for this Eagles team.

They’ve been knocked around physically and mentally through the first half of the season. They’re fortunate to be 4-4 right now, given all that’s gone against them in the first half.

But to get to the bye on a high note was huge. With two weeks off to refresh and get ready for Dallas, the Eagles can get themselves in position to get healthy, get right, and make a run towards taking over the division in the second half of the year.

Blame for their inability to produce crop yields

Nfc east is back in play, as the birds get a W. Im assuming Denny , we not only get a bye week, but , also a potential trade (s) coming. Bring howie some low hanging fruit. We need tacle depth, a dynamic running back and corner or safety help. We have a sked, ahead that will require , a balanced attack, if we can find in Adams , a guy who can tote the rock , and keep 11 upright , by blocking as a running back , maybe howie wont be dealing from desparation. A huge win and a 6:30 kick off in the desert.

I think running back and defensive line are the two biggest needs right now.

I loved what we saw from Adams yesterday, but whether he steps in to a larger role or not, I think they really need some kind of proven veteran help at the position. Corey Clement just hasn’t been healthy, Wendell Smallwood runs hard, but is such a liability in pass protection… I don’t know what you can count on from Sproles at this point, but if he isn’t ready to play after the bye week, I’d just about write off getting any contribution from him right now.

Maddox has stabilized safety, and they’d solve their corner problems if Schwartz plays either Sidney Jones or Rasul Douglas over Jalen Mills on the outside.

Dline may be my biggest concern right now. With Barnett gone, Cox is really the only young guy in that group…you have long, Graham, ngata, Bennett who are all older guys and will wear down with more snaps…Graham and long have already gone through stretches this year where they’ve been invisible…they need some more help there to keep everyone fresh