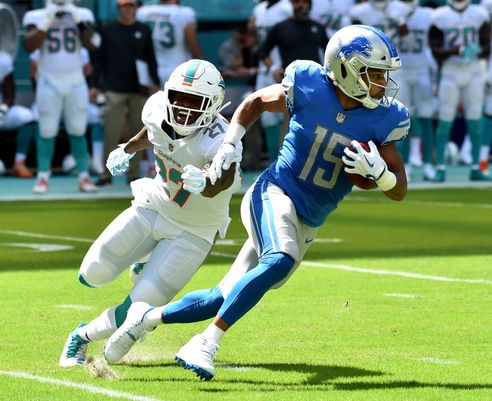 The Eagles made what I believe to be an outstanding trade today with the Detroit Lions to obtain wide receiver Golden Tate for third round draft pick.  Tate is clearly an upgrade at the wide receiver position and he gives the Eagles an accomplished route runner with tremendous hands and the speed to get deep.

This adds another valuable weapon to the Eagles offense.  The combination of Tate, Alshon Jeffery and Nelson Aguilar along with the Eagles outstanding tight ends Zack Ertz and Dallas Goedert the Eagles should be able to move up to another level in their passing game.

“Tate is a playmaker once he gets the ball in his hands, so I’m not sure whether he or Agholor will be playing out of the slot.”

I’m sure that Carson Wentz is sitting somewhere smiling because Tate will make his job easier.  Defenses will be in a quandary about which receiver to try to take away because the Eagles have as I said some outstanding tight ends and they can hurt you with passes to the running backs.  You/ve got Alshon Jeffery functioning there on the other side and he can make plays even when he’s not open.  This should definitely open things up for everybody underneath and move the Eagles passing game to another level.

I think this was definitely a good movie just before the trade deadline because it clearly makes Eagles a better football team.  The downside of the deal is the fact that they have parted with a third round pick for a player, who will likely not be playing with them next season.