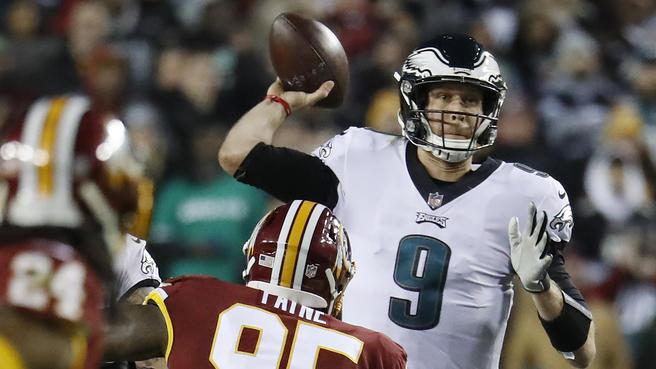 The Philadelphia Eagles are alive and well, and will in fact have the opportunity to properly defend their Super Bowl title in the NFL playoffs!

A 24-0 thrashing of the Washington Redskins coupled with a Minnesota Vikings’ meltdown have granted the Birds the sixth seed in the NFC, and a trip to Chicago to take on the young Bears next weekend!

Quarterback Nick Foles continued to serve as the catalyst for the team’s revival, with 221 yards and two touchdowns, completing 28 of 33 passes.

This week, Foles set the team record for completion percentage in a game, and tied the NFL record for consecutive completions in a game with 25 straight. Foles hit the 25 straight passes after throwing his only interception of the game. How’s that for bouncing back from early adversity??

Foles is truly a wonder to behold, and it is incredibly exciting to see him quarterback this team in the playoffs one more time. The reigning Super Bowl MVP did leave the game with a chest injury, but according to reports should be good to go for next week’s playoff match.

Doug Pederson Deserves Credit For Holding This Team Together

As much as Saint Nick rightfully gets a great deal of credit for the run this team has gone on over the last three weeks, you have to give a lot of credit to head coach Doug Pederson for keeping this ship together through some very trying times over the course of the year.

After the ugliness down in New Orleans, it would have been easy for this team to come apart at the seams. They’ve gone 5-1 since that game, and had the officials not whiffed on the “clear recovery” on the opening kickoff, the Eagles may have gone into the playoffs on a six-game winning streak.

This is a team that’s hot at the right time, and should be feared by all teams in the playoff picture. Doug deserves so much of the credit there.

On to Chicago, everyone!

The Bears are a heck of a defensive team, and Chicago is a very difficult place to go on the road and win.

But Mitchell Trubisky is also a young quarterback entering the playoffs for the first time. If the Eagles are able to contain Jordan Howard and Tarik Cohen and avoid turnovers on the offensive side of the ball?

After watching what this team has accomplished over the last year, it’d be crazy to start doubting them now!