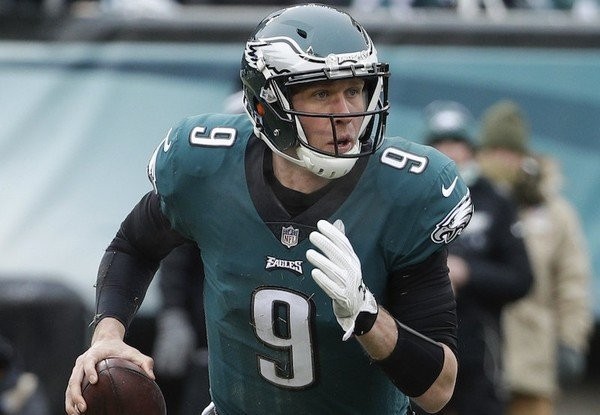 In a selection that wasn’t a surprise to anyone, Nick Foles was named the NFC Offensive Player of the Week.  They had to give him the award after the performance he had on Sunday afternoon against the Houston Texans. He drove the Eagles the length of the field to put them in a position for Jake Elliot to kick a game-winning field goal.  In the process of leading the Eagles to this victory, Nick set the all-time passing record for an Eagles quarterback throwing for 471 yards against the outstanding defensive front of the Houston Texans.
What can you say about Nick Foles?  He did what he had to do and got it done for the Eagles in an amazing way. You had the brilliant audible, then the great deep throw Nelson Agholor for an 83-yard bomb.  He hit Agholor in stride as he got the ball to all of his receivers in an outstanding display of quarterback play.

“All of these receivers know that Foles believes in them…”

He may have topped that throw with the tremendous focus and accuracy on the toss to Alshon Jeffery with the game on the line on the final drive of the game.  He did this with Jadeveon Clowney coming at him full speed and pounding him.   He put the ball up in the air and gave the 6’5″ Jeffery a chance to go up in the air above the rim and make a play.  All of these receivers know Foles believes in them because he makes these types of throws qand gives them chances to make plays.
There was tremendous drama after the play because Foles couldn’t get up immediately after the pounding by Clowney.  Doug Pederson and his staff had to put backup quarterback Nate Sudfeld in for a play.  He threw an incomplete pass out of bounds and Foles reentered the game.
A few plays later, Foles made another great throw on third down and 10.   He put air under the ball on a great throw to Eagles record-setting tight end Zach Ertz on a corner route.  Ertz was losing his balance with the ball in the air, so Foles put more air under to make it easier for Ertz to come down with it.
Ertz, who became the all time record holder as a tight end for catches in a single season, showed critics that any quarterback with good sense would target Ertz most of the time. Why? Because the guy is always open and he makes plays.  Ertz caught 12 passes from Foles for 110 yards on the day he broke Jason Witten‘s record of 110 catches in a single season.  He’s just having an amazing year.  The guy knows defensive coverages better than the defenders who are trying to cover him.  He caught two touchdowns against the Texans, but the third down catch on the final drive was just as important as the scores.

Let’s get back to Foles.   I’m not saying that Foles is the future of this football team because Carson Wentz is the franchise quarterback of this organization.  But right now, Foles gives them a better chance to win.  Wentz isn’t totally healthy, so I think he needs to stay on the bench until he is 100%.
I think Foles has sat and watched Wentz all season.  He’s been privy to corrections made in the quarterback meetings.  He’s probably stood on the sidelines and said I would have gotten the ball to Jeffery on that play, or I would have gotten the ball to Agholor on that play.
Foles went into the game against the Rams thinking, “I’ve got to get everybody involved”.  He’s gotten all of the team’s offensive weapons involved and nobody in the NFC wants to play the Eagles in the playoffs.

”Right now with Foles at the quarterback position and with all the weapons the Eagles have, they could go on the road against the Saints, Rams, Bears or the Cowboys and beat them in their stadiums.”

Afterward, Nick, Ertz and the crew said they knew the game against the Texans was theirs when they walked on the field for the final drive, despite being backed up on the 11-yard line.   They knew they were going to get the job done.   Then we sat and watched them do it.
All of his teammates say Foles has such a calm demeanor in the huddle that he exudes confidence in everybody else.  Check out how Ertz, Jeffery, Agholor and Darren Sproles all had big games. I’ve talked about Ertz, Jeffery and Agholor all ready, but Sproles caught the first touchdown throw by Foles.
Sproles scored the first touchdown on a fourth down play.  It was a rub route and Nick got the ball to the little guy in the open field and the Texans knew they were in trouble.  Once “The Little Muscle” got his hands on the football, he wasn’t going to be kept out of the end zone.  He avoided the first tackle by one of the Texans linebackers, then Sproles ran through two ‘would be’ tacklers near the end zone.  He went into the end zone standing up on a 37 yard touchdown play.
The fact that Foles has been awarded the NFC Offensive Player of the Week award is acknowledgement that this guy has taken his game to another level in much the same way that he did a year ago when he was leading the Eagles to a Super Bowl title.