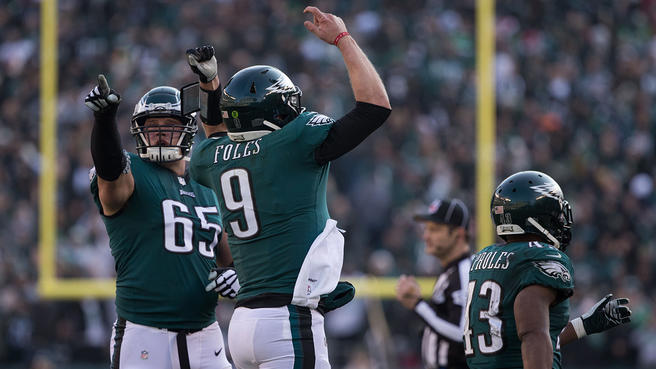 Nick Foles was more than up to the challenge of keeping the season alive and increasing the Eagles’ playoff chances.

Foles was the catalyst in the Eagles’ latest victory, shredding the Houston Texans for over 400 yards and four touchdowns. The reigning Super Bowl MVP made big throws throughout the game, and was particularly efficient on third and fourth down throws.

It was Foles’ fourth 400-yard game as an Eagle, he now is in sole possession for the most 400-yard games in Eagles’ franchise history. Foles also set a franchise record for passing yards with 471 yards. Just the latest notches in a very strange and legendary career for number nine.

The Eagles’ offense operated within a 15-yard box with a hobbled Carson Wentz, but with Foles things have opened up all over the field. Nick has been efficient with the short and intermediate throws, and took a healthy amount of shots down the field to keep things fresh.

The quarterback also did a great job getting everyone involved. A week after Foles rediscovered Alshon Jeffery in the Eagles’ offense, this week it was Nelson Agholor’s turn. Agholor had perhaps his best game of the season, recording over 100 yards and contributing an 83-yard bomb from Foles in the third quarter that gave the Eagles the go-ahead score.

The Eagles have exponentially more energy ever since Foles rejoined the lineup.

However, the Birds didn’t get the help that they needed from outside sources this week. Tampa Bay and Detroit both kept things close early, but quickly fell off and the Eagles didn’t receive help from the two pathetic franchises, so the Eagles will need additional help next week.

Eagles fans everywhere really need to deeply appreciate what they have in Nick Foles.

The guy has accomplished so much in his Eagles’ career. The single game record for touchdown passes. The singe game franchise record for passing yards and most 400-yard games. The playoff run last season. Out-dueling Tom Brady in the Super Bowl. The Philly Special.

I don’t know how Foles’ career will ultimately end with the Eagles, but he truly is a legendary figure for this city and this franchise.

Remember when the #InChipWeTrust nonsense once threw him AND a second-round pick away for useless fraud of a quarterback Sam Bradford? What a joke.

The Eagles’ playoff hopes are still alive. They need a win next week, and help from the Chicago Bears, or perhaps the Arizona Cardinals.

Their fate isn’t entirely in their hands, but with Foles playing at an extremely high level, this is a dangerous team that should scare any of the the NFC Playoff teams.