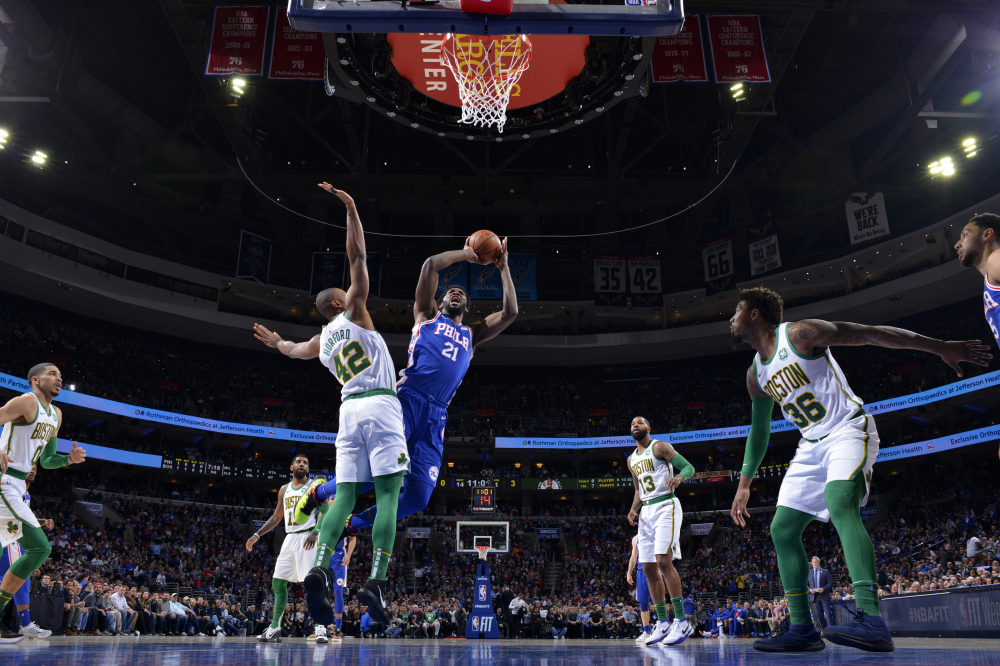 PHILADELPHIA, PA – MARCH 20: Joel Embiid #21 of the Philadelphia 76ers shoots the ball against the Boston Celtics on March 20, 2019 at the Wells Fargo Center in Philadelphia, Pennsylvania NOTE TO USER: User expressly acknowledges and agrees that, by downloading and/or using this Photograph, user is consenting to the terms and conditions of the Getty Images License Agreement. Mandatory Copyright Notice: Copyright 2019 NBAE (Photo by Jesse D. Garrabrant/NBAE via Getty Images)

You’ve got to give all the credit to the starters.  The 76ers five starters were at their best in the fourth quarter with the game on the line.  The starting five were the key to the basketball game.  They were led by their best player Joel Embiid, who scored 37 points and grabbed 22 rebounds.  The big fella made 20 out of 21 free throws, which kept the Sixers in the game.  He was not alone as Jimmy Butler scored 22, Tobias Harris had 21, J.J. Riddick had 17 and Ben Simmons dropped in 13 with 7 assists.

For much of the game it looked like another Celtics win.   Boston had a 15 point lead in the first half with some outstanding shooting.  They had an 11 point lead at the end of the first half, so things looked bleak for Philadelphia.  Thankfully, the Sixers would not go away and you knew there was a chance of the Sixers winning the game because the Celtics couldn’t put them away despite the fact that they were shooting over 60%.   That level of shooting usually doesn’t continue for an entire game and the Celtics shooting went south a bit in the fourth quarter.   It was all the Sixers needed.   They pushed the slightly open the door wide open for Butler, who delivered the knockout blow.   He dropped a couple of threes in the last couple of minutes and that was just what the doctor ordered.  He came through in the clutch and that meant everybody was playing the role.

Embiid was dominating, Riddick made four threes in the game, Simmons did a nice job distributing the ball, Harris played a nice all around game and Jimmy Buckets came through with some big time jumpers with it all on the line.  So life is good right now for the Sixers.  They’ve got a three-game lead in the third slot in the Eastern Conference.   They still have got to stay healthy and they’re going to need their bench to step up during the playoffs.  We all know that you can’t mark to the Finals with only your starting five playing great basketball.  Let’s celebrate the win over the Celtics, but look ahead because this team has much more work to do.

Eagles Are Likely To Draft A Lineman In The First Round