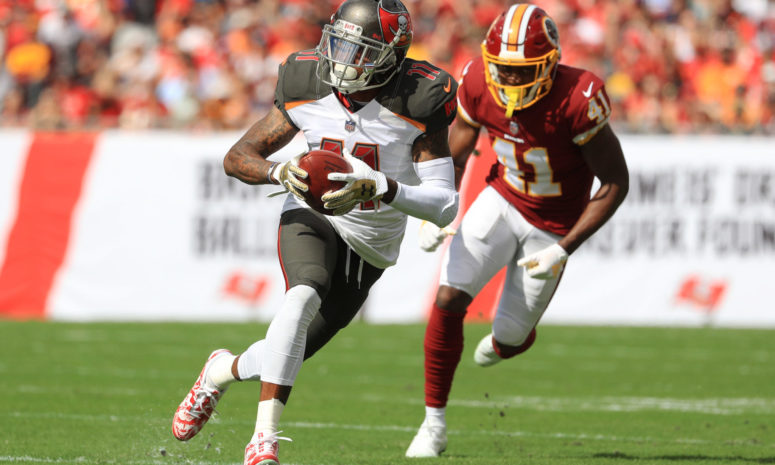 The Eagles offense was hamstrung in the 2018 season when their fastest wide receiver Mike Wallace, who had been signed after a number of years with Baltimore, went down with a broken ankle in the second game of the season   Doug Pederson and his offensive staff were forced to play the rest of the schedule without a serious deep threat.  Safeties were emboldened to come up closer and closer in order to contest intermediate throws to Alshon Jeffery and Nelson Agholor, while also helping to slow down the Birds running game.  For the most part, the deep pass was missing from the Eagles offensive attack.

Eagles V.P. of Football Operations, Howie Roseman was committed to make sure that won’t happen again in 2019, so they’ve decided to acquire a receiver who has a previous history here in Philadelphia.   Earlier this week, the Eagles worked out an agreement with Tampa Bay to acquire veteran speedster and former Eagle, DeSean Jackson.

Nearly all the Eagles fans are thrilled to have the talented playmaker back on the roster.  Eagles fans still haven’t forgiven Chip Kelly for getting rid of Jackson and they haven’t forgotten that “breathtaking” punt return against the Giants in an amazing come from behind victory for the Birds at the Meadowlands.  The outstanding call of the game by Merrill Reese and Mike Quick still sends chills up my spine when I watch the replay.

Amazingly the 11-year veteran speedster, who has played three years as a Redskin and two with the Buccaneers since his time with the Birds, has been able to maintain his blazing speed through all those years.  Jackson, who is only about 5’10” and weighing in 175 pound area and he can still cover 40 yards in about 4.3 seconds or less.  He’s done it by working out like a track sprinter who is trying to qualify for the Olympics.

Last year Jackson led the league with an 18.9 yards per catch average.  He caught 41 passes with 4 touchdowns for 774 yards.  That’s proof that he can still take the top off a defense.  The diminutive receiver tracks the deep ball as well as any receiver in the league.  The Birds are confident that Jackson can team up with Carson Wentz to form a lethal deep ball duo.

The key to Jackson’s success or failure in his return to the Birds will likely come down to his ability or inability to stay healthy.  He played in 10 or 16 games last year for the Bucs.  The Birds need him to get closer to 16 out of 16 or may 14 out of 16.  You know that saying, “You can’t make the club in the tub”.

On the defensive side of the ball in the 2018 season, the off-season injury to defensive tackle Tim Jernigan left the Birds in need of somebody to play along side Fletcher Cox.  Cox is a one man wrecking crew, if an offense tries to block him with one guy.   Due to the absence of Jernigan, offenses were able to double-team Cox, but the Eagles didn’t have anybody on the roster to make those offensive lines pay for using that strategy.

This is the reason they have signed veteran defensive tackle Malik Jackson.  Despite having a down year in 2018, this seven-year defensive lineman is and has been a tremendous pass-rusher and a winner.  He plays with passion and tenacity. Jackson played the first four years of his NFL career in Denver.  While there he made a major contribution on a dominating defense that led the Broncos, with a washed up Peyton Manning at quarterback, to a Super Bowl title. The Broncos couldn’t score, but they didn’t have to because of the defense that Jackson played on.

The last few years he has lined up for one of the best defenses in the league in Jacksonville.  Two years ago, Jackson was a key player on a Jaguars squad, which came very close to knocking off the Patriots in the AFC Championship game and taking on the Eagles in the Super Bowl.  This big defensive tackle, who played defensive end during most of his career, knows how to get to the passer.

He also understanding  the kind of discipline, preparation, and commitment that is required to win championships in the National Football League.  Jackson, who will be making about $10 million dollars a year is eager to return to his Pro Bowl form .  The Birds believe that he is the type of quality inside pass rusher, who can get to the passer when he is singled blocked.

If Jackson can indeed beat the single block, the Eagles will be able to make offenses pay for double-teaming Cox.  They’re confident this veteran pass rusher will beat the one-on-one blocks and get to the quarterback. As Eagles fans, we sincerely hope, that Roseman and company are right in their assessment of Jackson.

The Eagles Did The Right Thing For Nelson Agholor