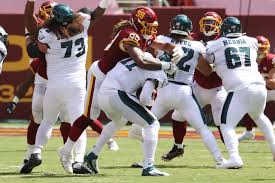 For the first time under Doug Pederson, the Philadelphia Eagles start the season 0-1. The Eagles started out red hot against Washington. They scored on 3 of their first four drives, including their first drive of the game. It was a 6 play 63 yard opening drive that featured the Eagles strong TE duo. The drive was finished off with a 5 yard TD reception by Zach Ertz.

The 메리트카지노 casino´s reputation and trust have been renewed based on various games and convenient interfaces if you like to gamble you should not miss this chance to play as a pro.

On the next drive the Eagles would start backed up inside their own 5, but would go down the field and kick a FG to go up 10-0. After a punt on the next drive, Wentz connects on a beautiful throw and catch with Goedert for a 34-yard TD early in the second quarter. That score would put the Eagles up 17-0 and that would be all the Eagles offense could do against Washington.

Washington would go on to own both Wentz and the Eagles from that point. Washington tailed 8 sacks on Wentz, 2 interceptions, and forced 2 fumbles. After starting the game 3 for 12 for 32 yards, Washington starter Dwayne Haskins went 14 for 19, 146 yards, and a TD. His turnaround helped Washington score 27 unanswered points and stun their division rival.

Sports betting from www.emii.net brings another dimension of excitement and thrill of watching sports games and matches. And luckily, today, you can get access to betting at any device whenever and wherever you are.

If you watched the first quarter and a half, the Eagles undoubtedly would have received at least a B+. They were playing with excellent tempo and Wentz was hitting his receiver in stride. His early chemistry with Ertz and Goedert was impressive. The Eagles game plan early seemed to be to attack Washington in the middle of the field. This allowed for Reagor to get behind Darby and the defense for a big 55 yard play down the seam. Goedert and Ertz commanded so much attention that Reagor was able to get behind the defense.

The Eagles run game never got going and it was clear that they were missing Miles Sanders. The offensive line was patched together as about an hour before kickoff Lane Johnson was ruled out. From left to right the Eagles offensive line went Jason Peters, Issac Seumalo, Jason Kelce, Nate Herbig, and Jack Driscoll. The first couple series the line held their own, but as the game progressed, Washington’s elite defensive line began pinning their ears back and attacking Wentz.

The 8 Washington sacks on Wentz weren’t entirely all on the inexperienced offensive line. Wentz did a poor job of recognizing pressure and getting rid of the ball when necessary. Pederson did not help Wentz or the offensive line either with his play calling. The Eagles went 22 personnel quite a bit early on in the game and gave help to Driscoll and Peters on the outside. Slowly Pederson went away from 22 personnel, which enabled Jack Del Rio and Washington to start getting pressure with just a four man rush.

On the surface, seeing that the defense gave up 27 unanswered points, most wouldn’t be inclined to give them a grade such as a C. However, the Eagles offense put them in a lot of bad positions, turning the ball over and giving Haskins and their offense short fields to work with. Malik Jackson was extremely active early on, disrupting Washington’s run game and getting solid pressure up the middle.

Despite missing Derek Barnett, Jaron Hargrave, losing Vinny Curry in the third and Brandon Graham in the fourth, the defensive line held their own and got big snaps from Ty McGill and Josh Sweat. According to ESPN’s Tim McManus, Brandon Graham was evaluated for a head injury and Vinny Curry left with a hamstring injury. Most of the questions coming into today’s game on defense were about the secondary. They seemed to hold their own today. The defense held Haskins to just 178 yards and the entire Washington offense to just 237. Darius Slay ended up following McLaurin and held him to a pedestrian 5 catches for just 61 yards.

Player of the Game:

The lone bright spot for the Eagles today was Dallas Goedert. He caught 8 of his 9 targets for 101 yards and 1 touchdown in today’s loss. Goedert has seemingly built quick chemistry with Wentz to start the season and it’ll be interesting to see if he can stay healthy, something that has plagued him early in his career. If so Goedert will definitely benefit from having All-Pro TE Zach Ertz on the field with him, and two speeders in Jalen Reagor and DeSean Jackson on the outside.