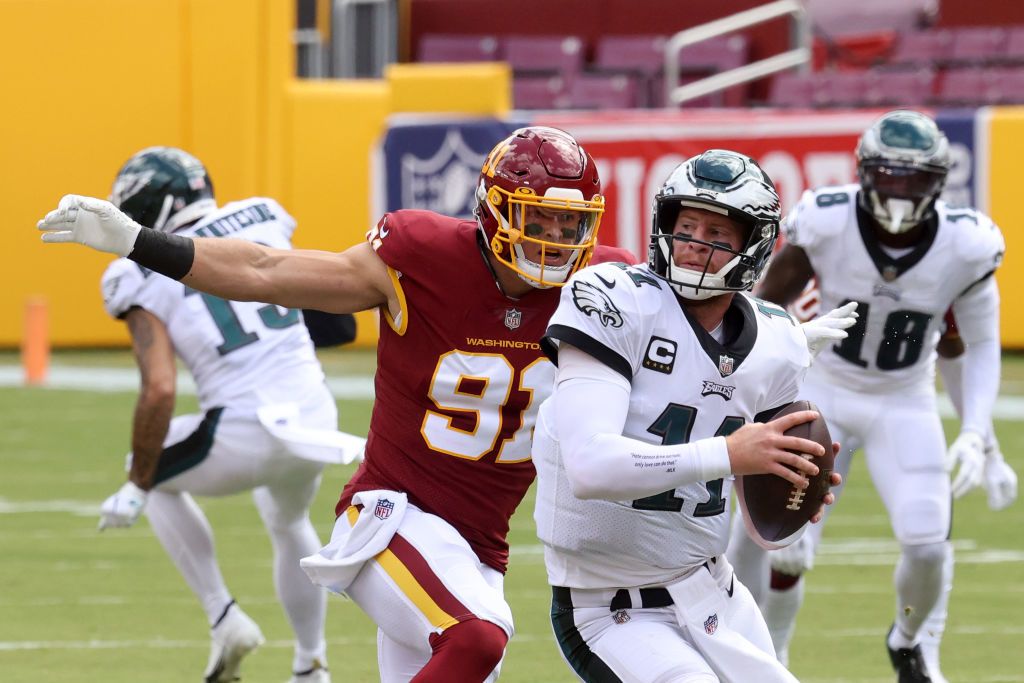 That was an awful loss by the Eagles yesterday to the Washington Football Team.  The Birds blew a 17-0 lead and wound up losing to a Washington team that’s not expected to do anything in the division this year.  Check out my G. Cobb Birds Podcast on this link – https://www.buzzsprout.com/1322641/5441617-this-one-was-on-carson-wentz.mp3?blob_id=22123849&download=true

This was a really poor game by Eagles quarterback Carson Wentz because he took chances he didn’t have to take.  Many times he refused to check the ball down to a running back.  Time after time, he dropped in the pocket and looked deep.  Wentz was looking for a big play on every snap.  Unfortunately many of those big plays were had by Washington.

He’s got to learn patience especially against a talented defensive front that’s going to get pressure on him.  He also knew we had backups on the offensive line.  There’s no excuse for an experienced quarterback refusing to temper his aggressiveness in holding onto the football and refusing to check it down or throw it away.

They had a lead going into the half of 17-0, but Carson threw an interception, which put Washington in position to score a touchdown and close the lead the 10.   In the second-half, he took more chances and wound up throwing another interception and being sacked time and time again.

One of the fundamentals of the West Coast offense is always having check downs targets to get the ball out of the quarterback’s hands.   He just held the ball too long and was sacked for too many losses.  One sack cost the Eagles three points because the field goal try came up a few yards short.  Wentz just was not sharp despite the fact that the Eagles had some big plays early but the the two interceptions and fumble ended up costing them the game.

It seems that on every play Wentz was trying to make a big play.  He would not be satisfied with a positive gain, he wanted a big play on each play, which isn’t realistic.  The Eagles signal caller had to know that the inexperienced Eagles offensive line was going to have trouble blocking all the talent the Washington football team had on their defensive front.

This was very frustrating to let this game get away like this at the beginning of the season.   This is the type of loss that used to happen to the Eagles but Doug Pederson has been very successful during his time is the head coach of not letting games get away that the team should win.   The game yesterday was in the bag and somehow they let it get away.

This was a very disappointing loss for the team but it’s really got to hurt Wentz because he just couldn’t seem to process the information that he needed to process in order to get the ball out of his hands.   He gave up sack after sack while refusing to throw the ball away or check it down to a running back.  This is one that’s really got to hurt.  They let a game like this get away against a mediocre team.