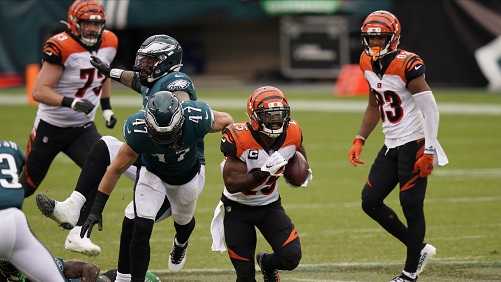 When the Eagles schedule came out, no one foresaw an 0-2-1 start against Washington, the Rams, and the Bengals. Well three weeks into the season and that is exactly where the Eagles stand.

Heisman Trophy winner Joe Burrow and the Cincinnati Bengals came into Philly and handed the Eagles their first tie since 2008. Burrow and his quartet of weapons carved up the Eagles defense. Tee Higgins caught two touchdowns, Tyler Boyd hauled in 10 receptions for 125 yards, Joe Mixon had 65 all purpose yards, and AJ Green caught 5 of his 6 targets for 36 yards.

The Eagles have some major issues and they all stem from one man, Howie Roseman.

Seemingly nothing went right today for the Eagles offense. Carson Wentz hasn’t played well to start the season, but it is almost as if he’s been set up to fail. Dallas Goedert left early in the game, as did DeSean Jackson, and the other Eagles weapons just never had any space to work with. Wentz missed some easy throws and was also picked off twice, albeit one on a deflection.

The Bengals struggle mightily at stopping the run. Miles Sanders and Greg Ward were the only positive players on offense today as Sanders totaled 95 yards on 18 carries, and Ward caught 8 passes for 72 yards and 1 TD.

The Eagles defense early on in the season had its fair share of struggles. This week the defense stepped up when needed to help the Eagles stay in this game until the end. The defense ended up with 8 sacks and delivered many more hits on Joe Burrow.

The Bengals Head Coach Zac Taylor worked under Rams coach Sean McVay in Los Angeles. The same things the Rams did against the birds a week ago, you saw the Bengals doing this week. Tyler Boyd and rookie Tee Higgins seemed to always be running free amongst our secondary.

Player of the Game:

I couldn’t pick between Miles Sanders and Greg Ward, so I am going to pick them both as co-players of the game. Miles Sanders did an excellent job at staying vertical in the run game this afternoon, and when asked, he ran excellent routes out of the backfield, but was overthrown quite a bit. When Goedert went down, the Eagles needed a WR to step up big and Greg Ward was that player. He had a big TD in the second quarter along the sideline, after putting a great move on the cornerback.

Opponent Outlook: The 49ers are as beat up as the Eagles. San Francisco has lost pass rushers Nick Bosa and Solomon Thomas to torn ACL injuries, TE George Kittle to a knee injury, RB Raheem Mostert to a knee injury, and QB Jimmy Garopolo to an ankle injury. There is an expectation that Kittle will play and will most certainly give the Eagles defense fits as he is one of the best TE’s in the league.

The Eagles Defense Was Dominated By The Rams