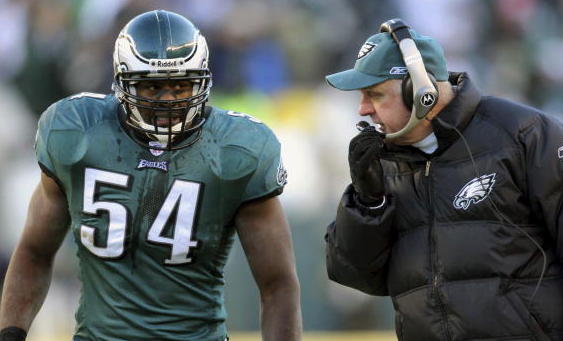 Jeremiah Trotter, he was Philadelphia football; sacrificing everything to make a play.  The #54 jersey was worn proudly; it spoke of an identity with how the ax man conducted his business on and off the field.  A 1998 third round selection, his contribution was the first of significant value from the linebacker position drafted in the first three rounds since the Eagles took Jerry Dewayne Robinson 21st overall in 1979.  Aside from the 2012 second round selection of Mychal Kendricks and 2015 third round selection of Jordan Hicks, over four decades have transcended with mediocre return on investment for a crucial positional group.

Former Eagles defensive coordinator Jim Schwartz may not have prioritized the linebacker position, but the neglect for compiling a NFL depth chart in 2020 was not his executive decision to make.  Going into week 1 of the season with Nathan Gerry, T.J. Edwards and Duke Riley as starters; fans had flashbacks to the 2007 formidable choice of naming  Greg Lewis punt returner without prior experience.  TJ Edwards was solid against the run, but was clearly limited by his athleticism and ability to drop back into coverage.  Nathan Gerry loved himself some Nathan Gerry; so much so, that he blew coverage assignments and repeatedly missed tackles before getting injured.  Duke Riley because he was a NFL veteran was handed a starting job, yet he was known more for his outdated bleached hair look.  Howie did his part to scout talent, but 2020 third round project Davion Taylor looked scared of contact and local Temple alum Shaun Bradley was simply over-matched.

Alex Singleton from Montana State was the lone bright spot for a 2020 junior varsity Eagles linebacker group.  The argument could be made that Singleton earned the right to start in 2021, and should get the opportunity to man the middle.  If the Eagles commit to resurrecting the linebacker depth chart, Singleton will likely serve as a core special teams captain and the next man up if a starter were to lose time due to injury.

Heading into free agency, the Eagles will likely target players in two categories; familiarity with the new coaching staff and mid-level veterans looking to get paid with their rookie contract in the rear view mirror.  Manning the middle should be top priority; Anthony Walker Jr is the obvious target, coming from the Colts this would make too much sense not to happen.  With the surplus of money invested in the defensive line and questions in the secondary, having an extension of rookie defensive head coach Jonathan Gannon by adding Walker Jr is the right call.  Jayon Brown would be my second option, he played in Tennessee and coming off of injury would be a cheaper option.  My gut says Brown would benefit from a situation where he can play freely and not assume play calling duties.

Prediction: Eagles sign Anthony Walker Jr, 4 Years/30 Million (18 Million Guaranteed)  Howie keeps the 2021 cap figure low with 2022 & 2023 taking on the majority of the contract.  With 3 million remaining of his signing bonus in 2024, Walker Jr will be cut prior to his 30th birthday.

The outside linebacker options offer a more diverse menu; but I expect the top options like Matt Milano and Haason Redick to get overpaid.  Unfortunately this impacts the demand for my top target, Eric Wilson who really developed into a play-maker last year in Minnesota.  I expect Roseman to go the route of versatility, focusing on landing a veteran player with starting experience at both the SAM and WILL spots.

Tyus Bowser– A 2017 second round pick for the Ravens, Bowser has shown the flashes with his blend of size and speed that opposing coaches have to account for.

Eagles Jeffrey Lurie Has Been Hands On For A While

Show Me The Money!