Eagles Got It Done In The Red Zone 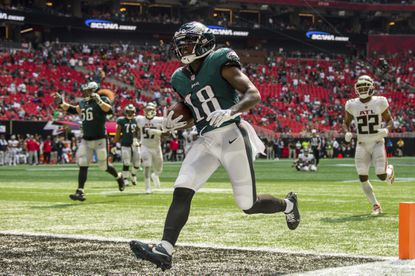 YouTube Video – Check out this YouTube video of me on the JAKIB Media National Show with Dan Sileo. I thought Birds head coach Nick Sirianni did a great job of scheming up ways for Jalen Hurts and the Birds to get into the end zone when they got in the red zone.

First there was a pick play with Zach Ertz getting in the path of the cornerback who was covering rookie wide out Devanta Smith. The second score was Hurts scrambling to his right just before the half and making a big time throw to Dallas Goedert for a score. The third touchdown was a quick screen to Jalen Reagor with offensive Jordan Mailata and Goedert wiping out the defenders. The fourth touchdown was a zone blocking quick hitter up the middle with rookie running back Kenneth Gainwell going untouched by following a great double team by center Jason Kelce and guard Isaac Seumalo.

The Falcons looked like Arthur Smith and Matt Ryan were lost when they got down there. I thought it was the difference in the game. Atlanta marched the length of the field to consume the first quarter and part of the second, but they came away with only six points total. The Eagles got down there and put touchdowns on the scoreboard.

To the “wow is me, off season cap guru wannabes” — Howie just restructured cox– now the eagles have the third most cap space this season— and they can roll it over to next year etc- anyone who whines about the kick the can down the road thing truly has no idea what they are talking about and probably flunked 9th grade math back in the day!
Also- get this- hurts just turned 23, the 3 guys who scored are 22, Mailata 24 and Seamolo is 27– Dickerson is 22, Sanders is 24—
Lots of people were fretting about lack of young talent.

Have to give Howie a lot of credit…

Unbelievable GM, and the job he did this off-season putting this roster together might go down in history similar to that 2016-2017 window.

It makes it easier to build a team around a cheap QB… With those 3 first round picks coming up next season start looking into re tooling that defense for the future. Another CB, S, DT IN 2022…

I really hope Gannon is not gone after 1 season.. how awful would that be? Would love to see him grow here for 2-3 years minimum. Good thing he’s a defensive coach, most teams look for the offensive minded guy.

Everton remember, there will be a couple of clunkers this year. There will be growing pains. The key is growth. Eagles fans are quick to kill Howie and Lurie … it’s really misplaced. They have kept us relevant

Howie created the Negative Cap Issues for 2022, so now all want to praise him for fixing what he fucked up? Typical Homer Eagle Fans as Usual ..
Eagles are looking to extend both J Sweat and D Goedart this Calendat year so thry both don’t get into Free-Agency when the Price always gets higher
Also look for a Trade with Seattle Seahawks
that will send OT Andre Dillard & Mid Round Draft Pick for their safety Qundree Diggs who is unhappy with his current Contract
Seahawks have 32-33 LT Duane Brown on his last legs for them, Seahawks know Dillard well from his Washington State College Days
Seahawks just paid their other Safety J Adams to a huge deal and are not willing to Pay Quandree Diggs more than his Current Deal
A Win-Win for Both Teams and both Players
You heard it here First

You have been crying cap for years and you never ever get it right! You (nor any fan) understand the cap. You sit there dispatching trucks, see a player sign for a lot of money, get jealous snd say they are in bad cap shape. They signed quality FA this year. They paid their home grown guy and have a ton of picks. Well paid veterans, paying the young core and lots of young players…. Sounds bout right

The cap is a completely fake number- for instance overthecap (which I’ve just started exploring) says the eagles are $9M under this year and next-I don’t think that reflects Cox/Mailata. The Cowgirls are showing $22M over next year. Ravens have $25 M going into next year…oops, Jackson isn’t signed. The Saints are $55M over next year and WINSTON ISN’T SIGNED. Going through each team you see various levels of ghost numbers that causes panic in a stupid fan who doesn’t realize the impact is very low. Think about this off season as a transition year and there isn’t one FA that they were interested in that they couldn’t sign. It is a shell game, a hidden card trick etc– if Howie had been Trumps accountant than he wouldn’t be worried about jail and he would actually be rich.
Point of it is people throw darts and they have no idea that the dartboard is a mirage!

Remember the Emo weirds that chanted fire howie at a damn Sixers game including :

Roseman will go down as one of the most underappreciated Philly sports figure along w/RAJ.
people point to every miss and there are quite a few but pick any other team and it will be just as glaring. Take Seattle which all hold as a beacon of football genius. In 2012 they paid Matt Flynn a kings ransom to be their starter– picked Wilson as a developmental 3rd rounder and famously made the switch and tossed MILLIONS out the window.
The thing this past year should teach anyone is that in the NFL you better be prepared to pull the band aid off!
Eagles have masterfully built a culture where OL/DL know they will be taken care of and valued- If Mailata had waited and then just had an AVERAGE year he would have signed a big contract- instead the birds get him CHEAP and will begin a 10 year relationship w/him making him very rich…. they will work together to “kick the can down the road” this will be a perpetual cycle– the current team has Kelce, Brooks and LJ who have established this culture, winning, be a fine citizen and the birds will take care of you.

Paulman its already bad enough you won’t own up to your losses.. like voting for a brain dead president who hires transgender people to people a top health official in the nation not because He/She/It are qualified… but because he’s woke lmao

Howie might have “fucked up” the cap situation but a lot of that was due to bad luck.

When he signed Wentz to that contract… it was considered an amazing contract. A STEAL. He got the deal done before Watson, Lamar, Mahomes, Goff and we had our franchise elite QB for the low cheap.

Locking up our big body WR Alshon Jeffery was a no brainer.. He was 28-29 and was still good. After that drop in the Saints game…it was all down hill for him.

It’s so easy to look back and hate on the decision, but we all thought the Eagles were ready to compete for RINGS… being plural. We had our coach, our QB, our OL, etc..

Shit happens in this league. Howie has done a great job rebuilding this team from the ground up.

Again, anything can happen in this league… and its early.. But we are set up nice with draft capital and might have even more if we trade Ertz, Dillard…crazy turnaround.

Howie is fine trump should be in jail
Reply to  CT

Yes voting for an unfit psychotic 2 time loser president is horrible… Paul man didn’t commit that sin.
Once trump said , “just say the election is corrupt I will do the rest” any sane supporter would have bailed. Now still saying it’s fixed.. traitor to the nation. “There won’t be an America in 3 years”…. Still support that. You 2 are a traitor

Even my liberal lunatic friends are regretting voting for Joe Biden. It takes a sick minded individual to support a brain dead sick maniac….

Biden is flooding the country with Muslims who are the most bigoted religion on the planet.. It’s not that Americans are xenophobic, we just question people who put there wives in a 15th century tent.

Don’t ask Biden or his cult followers questions about the Middle East.. yoU WILL Just be ignored and laughed at

Instead talk about January 6th, THE DEADLY INSANE RESURRECTION.. Thats the real treason..not the death of our soldiers.

U can ask me about the Middle East and I’ll tell ya. Your god , Trump, negotiated with terrorists and agreed to free over 5,000 terrorists and drew up a written withdrawal plan and shared it with the terrorist orgs leadership. He negotiated with terrorists. This handcuffed Biden to either now go full on assault to undo it or bounce and he chose correctly to bounce. Grow up ya fucking piece of shit, anti American, dividing , radicalized piece of white trash

There’s even pictures of ur gods sec of state Pompeo meeting with, negotiating with and taking photo ops with the terrorists. Let’s also remember trump invited terrorists to America to go to camp David and they told him to fuck off then he freed them anyway

Ur a real piece of shit ct like human fucking trash and I’d love to slap ur dumbass upside ur head. Why don’t u just shut the fuck up about the impeached loser already and just let grandpa and the adults run the show. Ur dumb hate filled and lie filled posts on a blog that 2 people read does nothing for anyone.

You’re a woke bitch made traitor who supports a president who had our soldiers killed, and then you blame Trump LOL!!!!!

Your dirty foot wife wears the pants in your house and probably wears a size 10 sneaker. You would send her to fight for your woke soft ass.

Asking Pedophile Joe’s administration “People who work in a work place with 1000 employees have to get vaccinated but not refugees and immigrants?”

“Thats correct. Next question.” was the response.. LMAO

Fake news they never won a title before. The corrupt news media led by espn just made it up with their phony sources from 1986.

Didn’t Trump try to buy into the Ownership with the Mets ? Maybe CT knows ?

Sick minded people like Trump who wished pedofile ghislaine maxwell well? Who also today wished well the terrorists that attacked are capital ? Ur a god damn fraud ct. a fraud that worships a man with the intellectual capacity of an 8 year old and never once criticized any of the 300000 lies or bleach or lights or wishing pedos well. Ur a cult member ya freak!

Absolutely pathetic you have zero to say about ur god negotiated with, freeing, and inviting terrorists to USA. Ur a clown cult member.

For the record my wife does wear the pants because she’s super successful and incredibly wealthy with clean feet and a size 7.5. But I’d slap the shit out of your dumb brainwashed ass with pants , a skirt on or but ass Naked and that’s just a fact.

Cr without using the words; Biden, Obama, AOC respond to:
1. Just say it was rigged I will do the rest
2. The military is for losers and suckers
3. It will go away
4. Healthcare is easy
5. I can build a wall and Mexico will pay
6. I’m a stable genius… hilarious

I have read several good stuff here. Certainly worth bookmarking for revisiting. I surprise how much effort you put to make such a excellent informative website.