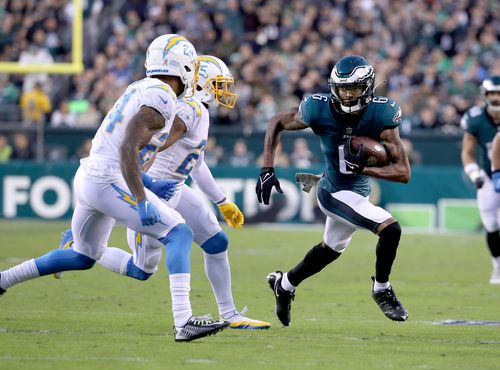 The Eagles offense made substantial advancements again this week and this time it was versus the Los Angeles Chargers, who have the poorest run defense in the NFL. The Birds had a balanced attack with their running component leading the way against the NFL worst rushing defense. The passing component came through when the Birds needed to make something happen on third downs for the most part.

Head coach Nick Sirriani did a good job of keeping the Chargers off balance with sweeps, quick hitters up the middle, and draws. The Birds pounded the Chargers for 162 yards rushing with Jordan Howard leading the way with 71 yards on 17 carriers, followed by Jalen Hurts with 10 carries for 10 yards and Boston Scott with 10 carries for 40 yards. These numbers and this attack may not impress you very much, but when you compare it to earlier in the season, you can’t help but be impressed.

You can see that the Birds young offensive linemen Jordan Mailata and Landon Dickerson enjoy run blocking. The Birds successful running attack gives them the chance to tee off on their defensive opponents. They can fire out on the snap of the football get physical with the defensive front. This prevents the defensive line from flying up field in their pass rush. They are forced to honor the run threat, which makes these youngsters’ jobs easier.

I thought the Eagles passing attack was an exceptional this week especially the route running ability of Devante Smith. He did a tremendous job of turning around the Chargers cornerbacks. Everybody could see the chemistry between Hurts and Smith on the big plays they put together. Hurts made some tremendously accurate throws to Smith and the biggest one was for a touchdown that tied up the game.

The Running Game Leads The Way Against The Broncos