The Running Game Leads The Way Against The Broncos 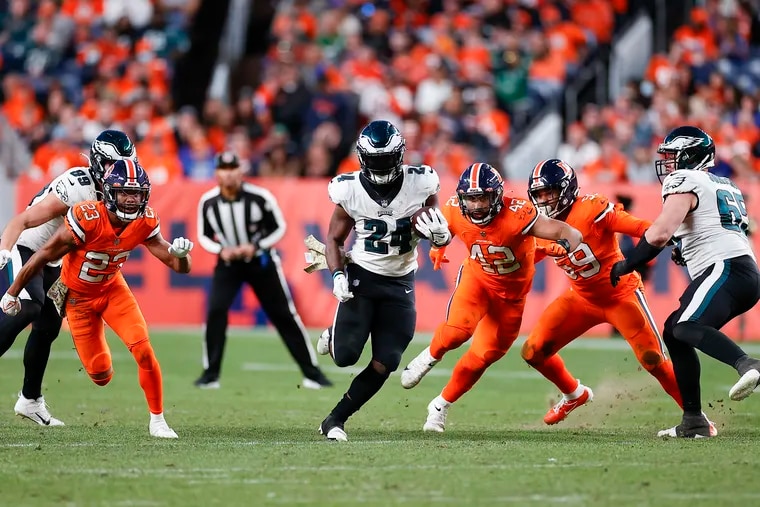 The Eagles offense put together an amazing performance against the Denver Broncos. The first half was with a doubt the best half of football for the Birds offense this season. Remember that this Denver football team had destroyed the Dallas Cowboys in Dallas just a week ago. This same Denver team was leading the Cowboys 30-0 in the fourth quarter of that contest. Things are definitely looking up for the Eagles and that is especially true of the Birds running game.

Head coach Nick Sirianni has changed his tune in calling plays for the offense. He has been wisely leaning on the running back combination of Boston Scott and Jordan Howard. They are complete opposites from a size and speed perspective, but they have been getting the job done in a major way for the Birds.

Scott is a little scat back, who does a great job of putting his foot into the ground and getting north and south while running with the football. Howard is a big physical back, isn’t as quick as Scott, but he’s powerful when he puts his foot into the ground and runs over anything that gets in his way. On Sunday, Scott gained 81 yards on 11 carries and Howard had 83 yards on 12 carries.

Eagles quarterback Jalen Hurts is the team’s leading rusher and he does a great job of making good decisions with those RPO’s (run pass options) plays. He has the option of giving the ball to the running back or keeping eat and running with it, or keeping it and throwing the ball downfield. The threat of Hurts getting outside opens things up for Scott and Howard up the middle and off tackle.

The Eagles offensive line has been pounding defenses and you can tell that the Eagles young offensive linemen, Jordan Mailata, Landon Dickerson and Jack Driscoll love to block for the run. Dickerson, the rookie, is a much better run blocker than he is a pass blocker. Mailata and Driscoll do a pretty good job at both, but I could tell that they love mauling defenders on running plays.

Pro Bowl center Jason Kelce does a great job of quickly opening holes up the middle for both Scott and Howard. Pro Bowl right tackle Lane Johnson is healthy and still dominating on the right side.

The Eagles could have a good problem in the upcoming game against the New Orleans Saints. Starting running back Miles Sanders is due to return and that could mean the end of the Scott and Howard duo. The Saints defense is leading the league in stopping the run, so it will be an interesting week to see what type of game plan the Eagles put together for the New Orleans.