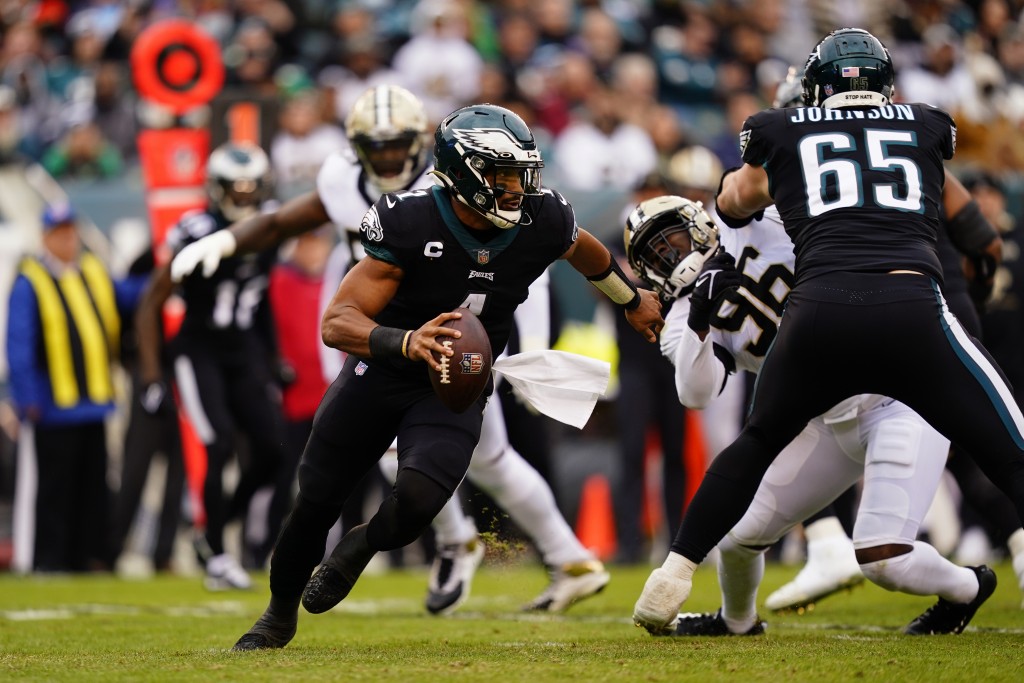 Eagles had a big 40-29 win over the New Orleans Saints on Sunday, but they did it without playing their best football. Again it was the running game, which put the Eagles up over the top and also an opportunistic defense, which forced a couple of turnovers with defensive back Darius “Big Play” Slay and linebacker T.J. Edwards coming up with interceptions, that put the Eagles in position to jump out to a big lead and be able to hang onto it in the second half.

The Eagles offensive line has got to be given a lot of credit for the success that this team has had running the football. The amazing thing about it is that they can get better. Yes they have All-Pro center Jason Kelce and All-Pro right tackle Lane Johnson, but the rest of the Birds offensive line are young guys, who are still learning how to play at the NFL level.

Left tackle Jordan Mailata, left guard Landon Dickerson and right guard Nate Herbig are all very young. They’re still learning and trying to find their way in the National Football League. They’re going to get better. They make youthful mistakes, but their potential is through the roof. The Eagles passing offense can get much better both with the pass blocking of the offensive line and the accuracy of quarterback Jalen Hurts. Hurts’ ability to run with the football has destroyed the run defenses the Birds have faced.

Still it was the Eagles running game, that was amazing. Their big and young left side with Mailata and Dickerson, who Johnson referred to as both being from the dinosaur age because of their size. Mailata is 6’8″ and weighs about 380 pounds, while Dickerson is 6’5″ and weighs in the 340 pound range. They have been able to clear the way for a running game which ran the football for 242 yards against what was supposedly the best run defense in the National Football League.

The Saints were allowing only 73 rushing yards per game, but the Eagles just ran through them. The Birds had well over 100 yards in the first half and they’ve got room for improvement. The Birds can throw the football much better than they did yesterday. They can improve defensively, even though, they gave up quite a few points late in the game to let the Saints get back in it. But the Birds showed that they can score when they need to because they put together a big drive to seal the game.

Hurts made an unbelievable cut on a option play and flew through the Saints defense on a 24-yard touchdown run, which sealed the Birds victory. The Eagles quarterback ran for three touchdowns on Sunday and led the Birds to victory, but he still has room for improvement. He completed 13 of 24 attempts for 147 yards.

Eagles are definitely looking like a playoff team because they’re winning when it counts and beating teams with winning records. The Birds will play the Giants next week and if they can beat the teams that they should beat, then they will be going to the playoffs.

The Eagles Defense Must Force Two or Three Turnovers