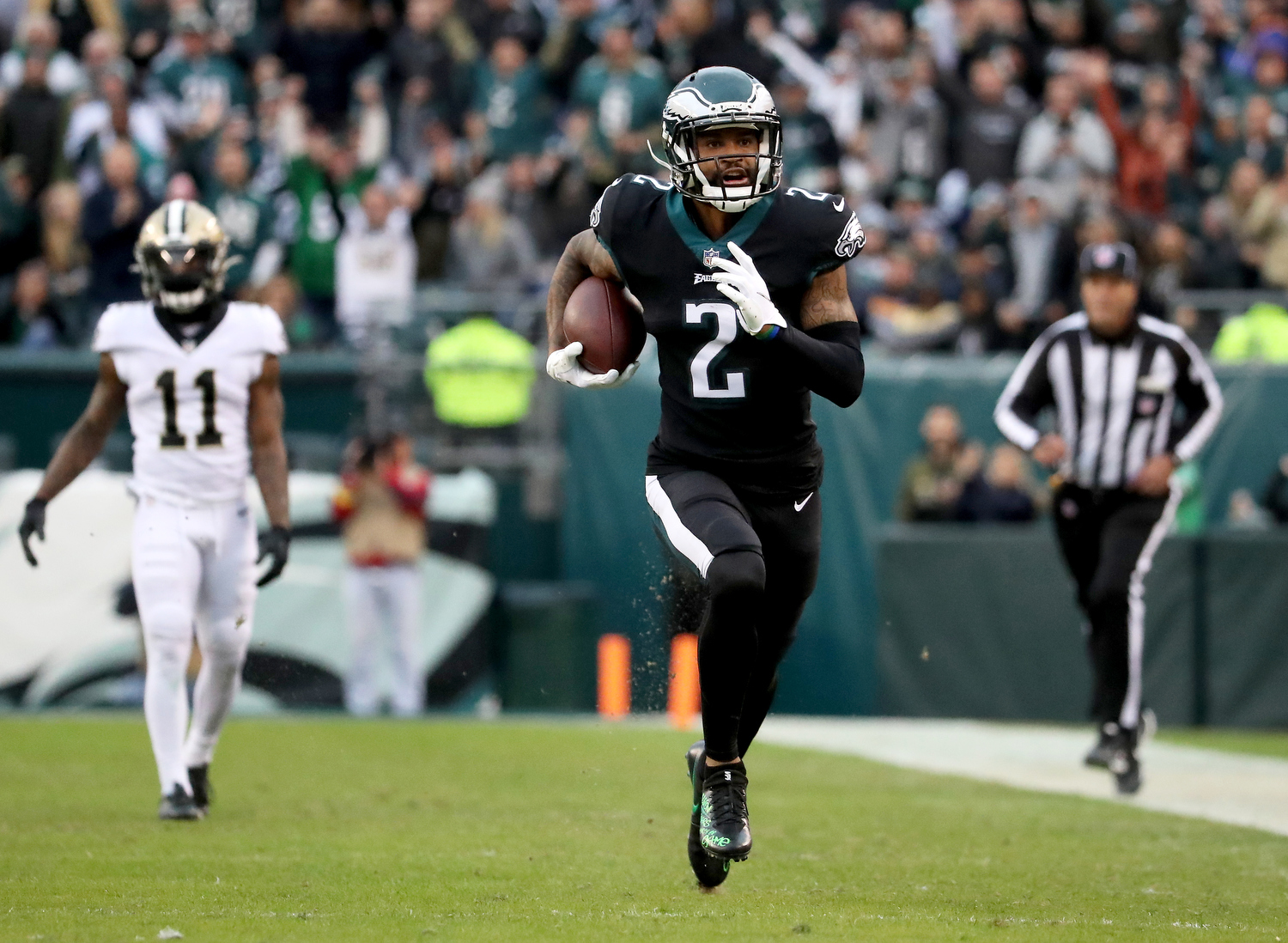 Philadelphia Eagles CB Darius Slay (2) intercepts a pass and scores a touchdown during the second quarter of the NFL game against the New Orleans Saints at Lincoln Financial Field, Sunday, Nov. 21, 2021.

Eagles cornerback Darius Slay is on an amazing run for the Eagles. He is a defensive cornerback, yet he has scored in three of the last four Eagles games and he’s done it all in spectacular fashion. He was at it again in the Eagles 40-29 win over the Saints.

It was just seconds before halftime, when Slay picked off a Trevor Siemian pass on the sideline and ran it back about 50 yards for a touchdown to give the Eagles a 27 to 7 halftime lead. Siemian had thrown an interception to Eagles linebacker T.J. Edwards earlier in the half and he had almost thrown another interception before Slay’s pick, but still Saints head coach Sean Payton was calling time outs to give Siemian the chance to throw the ball some more.

The interception by Slay was a very poorly thrown ball by Siemian. The throw was late and that’s one thing a seasoned quarterback knows, don’t throw an out route late. So this was easy pickings for Slay. He has returned two fumble recoveries for touchdowns this season.

Of course everybody remembers last week, when Slay picked up a fumble and ran it back 82-yards for a spectacular touchdown return to put the Eagles in position for a win over the Broncos. It was an amazing play because Slay picked up the ball ran backwards, then fumbled, but he was able to recover his own fumble and then he was able to weave through  the Broncos offensive players and run it back for a touchdown.

He also returned a touchdown earlier in the year against the Detroit Lions, when he picked up a ball on the ground, which had been caused by Avonte Maddox who stripped the receiver of the ball. Slay was in the right place at the right time. He picked up the fumble and had an easy time of running it back for a touchdown to totally embarrass his former team, the Detroit Lions.   So there you have it, Darius Slay who had a game earlier in the season against the Carolina Panthers, where he picked off two interceptions.

So far this season, Slay has picked up three interceptions, one which he has returned for a touchdown. He has picked up two fumbles and returned each of them for touchdowns. I think you can pretty much except the fact that Darius “Big Play” Slay is going to the Pro Bowl, when the season is over, if the Birds aren’t in the playoffs.

He’s having an amazing year and remember don’t call him Darius call him “Big Play Slay” and I’ve got to give it to him, he’s earning his reputation.