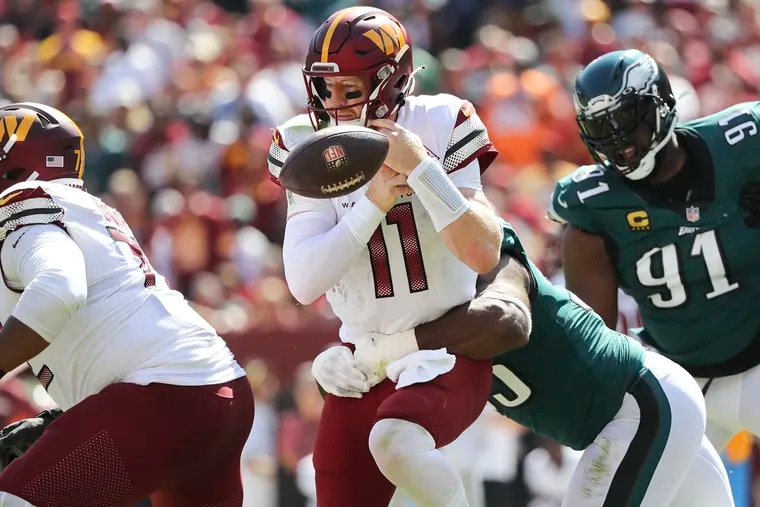 It was another dominating performance for the Eagles, but this time it was led by the Birds defensive line.  Last week against the Vikings the Birds showed that they have one of the best secondaries in the league with cornerback Darius Slay leading the way. This week they showed that their D line can take over a game. The Eagles defensive line was all over Commanders quarterback Carson Wentz, like white on rice.

All of the Birds defensive linemen refused to be blocked one-on-one by the Washington offensive linemen and that created major problems for Wentz, who loves to hold the ball and try to create plays on his own.  It didn’t work this time. The Birds finished with nine sacks.  Yes you got that right, nine sacks.

The final score was Eagles 24 and Commanders 8.  It could’ve been much worse because the Eagles built a 24-0 lead at the half and didn’t score after that.   The first quarter was scoreless, but the Birds got the scoring started in the second quarter and never looked back.

It was another amazing performance by Birds quarterback Jalen Hurts.  He threw for 340 yards and three touchdown passes, while continuing to grow at the quarterback position because his recognition of coverages and blitzes improves each week.   Hurts is starting to changing plays just before the ball is snapped and the accuracy of his throws continues to get better and better.  After three weeks of action, there hasn’t been a quarterback in the league, who has been more valuable to his football team.

Eagles wide receiver DeVonta Smith was spectacular this week against the Commanders with 8 catches for 168 yards on the day.  His 45 yard catch in the second quarter set up the first score of the game.  The scoring started with the field-goal of 32 yards by Jake Elliott.  Smith really didn’t get his 2nd foot down on the catch, but the Eagles wisely hurried up to the next play and the ball was snapped a split second before Commanders head coach Ron Rivera threw down the challenge flag.  Washington wasn’t able to get a review of the reception so they got one over there on Rivera and the Commanders.

The Eagles defensive line was all over Wentz the entire game.  His offensive line wasn’t able to protect him.  It wasn’t a matter of one lineman doing the damage for the Birds.  It was a list of pass rushers.  In the first series, Eagles right defensive end Josh Sweat came around corner on the right side and beat Washington left tackle Charles Leno Jr. before taking Wentz down.

Next up was defensive tackle Fletcher Cox, who simply overpowered the Commanders right guard, Trai Turner.   On the very next play, Javon Hargrave attacked the right side of left guard Andrew Norwell and he got through to Wentz for another sack. wasn’t doing them a favor by hanging onto the ball but we all know about Carson and the way he loves the play that hero ball

Wentz wound up being sacked nine times in the game and all the Eagles defensive line got a piece of it.  Veteran defensive end Brandon Graham had a strip sack which set up by a score and that was prior to Dallas Goedert catching a screen pass from Hurts and taking in 23 yards for a touchdown. which gave the eagles a 10-0 lead.  The Eagles scored again before the end of the first half and it really was a display of Hurts taking his game to another level.  He made a call and gave a hand signal at the line of scrimmage, then hit A.J. Brown on a slant route and Brown with his size and strength was able to just carry the defensive back into the end zone. That put the Eagles up 17-0.

Later in the second quarter, the Birds drove again and Smith was able to go up and grab a pass at its highest point and pull it down for a touchdown catch the birds winning at halftime with a 24 to nothing lead The game for all intents and purposes was over and winch really never got into a rhythm they were able to get after him and he continues to hold the ball and try to make these miraculous plays rather than getting the ball out of his hands and against a good team a good defense like the Eagles he paid a price and wound up being sacked nine times.

Hurts is really putting himself in position to really have a MVP type of season. Of course, there’s a lot of football yet to be played, but at this moment, there’s not a quarterback in the league who has played better than Hurts.

If they were voting for MVP’s in the NFL right now, Hurts would have to be one of the top two or three names mentioned because he’s done everything to carry this team with his legs and with his arm.  The Birds definitely like a formidable opponent to whomever is on their schedule.  They have an abundance of offensive weapons and Hurts is able to do damage with his arm throwing the ball or with his legs running the ball so it’s very difficult for a defense to be able to pinpoint what they’re going to see.