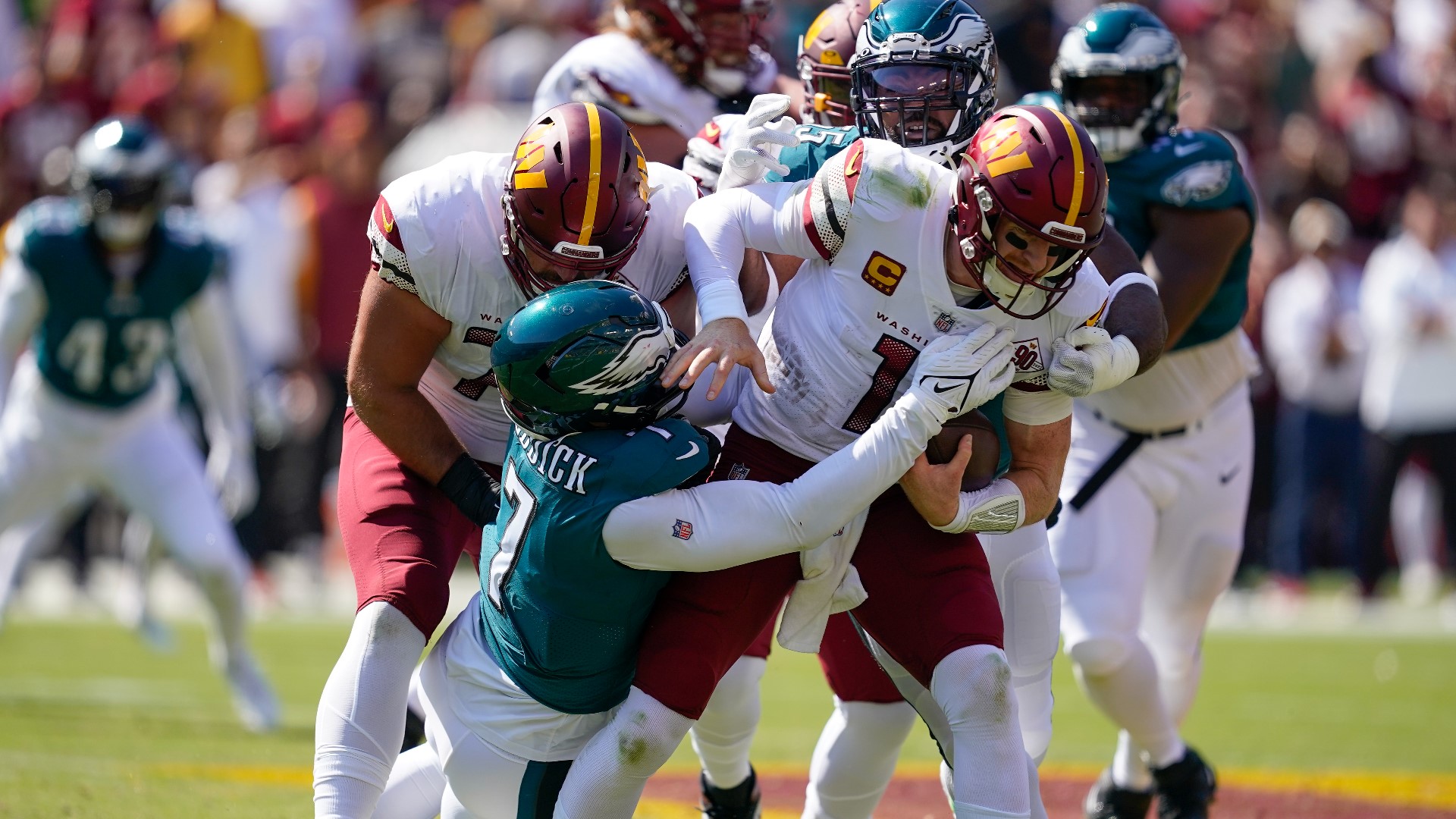 Article Written By Peter Visalli – I don’t know about anyone else, but personally I never thought we’d see an early 90’s/Jim Johnson style defense again. I also don’t know if Johnathan Gannon was being reserved with the blitzing in weeks one and two, saving it to hammer Carson in week three, but Carson was under siege from start to finish. He was sacked nine times which was a career high. Six of those sacks came in the first half.

As I said last week, Brandon Graham had revenge on his mind registering 2.5 out of the nine sacks. The other 6.5 sacks were spread out evenly between the rest of the front seven. The pressure clearly affected Carson because he struggled with his accuracy all day. Even in the few times where he didn’t have the pocket closing in on him, he was off at points. This was a game where he probably was looking for payback and unfortunately for him he had another thing coming. He spent the day on his back, running for his life and throwing the ball to the Eagles just as much as his own Commanders. Wentz also added two fumbles, one of which was recovered by the Eagles.

Wentz and the Commanders looked like a mess trying to do anything against this Eagles defense that continued to come together after their shaky start week one. This defense is looking quite scary and I have to say it’s about time. The glory days of Reggie, Jerome, Seth and Clyde were all but gone. This is finally a new day! With a disruptive and complete defense loaded with guys that are blood thirsty and personally I love it.

On the other end DeVonta Smith is determined to show everyone that there’s no clear number one receiver on this team. Much like the defense, DeVonta’s week one start of no catches has followed with a dramatic turn around. The Slim Reaper hauled in 8 catches, leading the team for a second week in a row for 169 yards and a TD.

From the moment AJ Brown’s named was called out on the draft day trade I think we all assumed he was going to be the clear number one. Well, DeVonta has other ideas about that. The Eagles have never had a one two punch at WR like this. Not even when T.O. was in town was there two Batman’s as Darius Slay would say. “We have no Robin’s, we have 3 Batman’s”. It would seem that Slay is right on the money.

On top of that once again Jalen Hurts was a mad man. 22 for 35, 340 yards passing, three TDs and no INTs. Who is this guy? Did he really progress this much in the offseason? He ran off the field yesterday to a cascade of MVP chants. This was as close to a home game as it was going to get on the road as Bird Gang flooded Fed-Ex Field in Landover Maryland to support their E-A-G-L-E-S EAGLES.

Expectations are now at an all time high. ESPN’s Ryan Clark tweeted “The Philadelphia Eagles are absolutely phenomenal on offense… That got Slim Reaper going today and he is taking souls! Oh and don’t look now but if you’re having Early MVP conversations without Jalen Hurts then you ain’t having realistic MVP conversations!”

I know we’re only three games in, but being at three games you can’t argue with that. If we had to give out an MVP trophy today, Hurts has to be in the running. Yes, that’s why it’s given out at the end of season. The thing is if Jalen Hurts keeps this up, it’s going to be the same conversation then. When the dust settled yesterday Carson Wentz got a first hand look at what he demanded his way out of. So I say to you Carson, you wanted this and you’re welcome! – Article Written By Peter Visalli