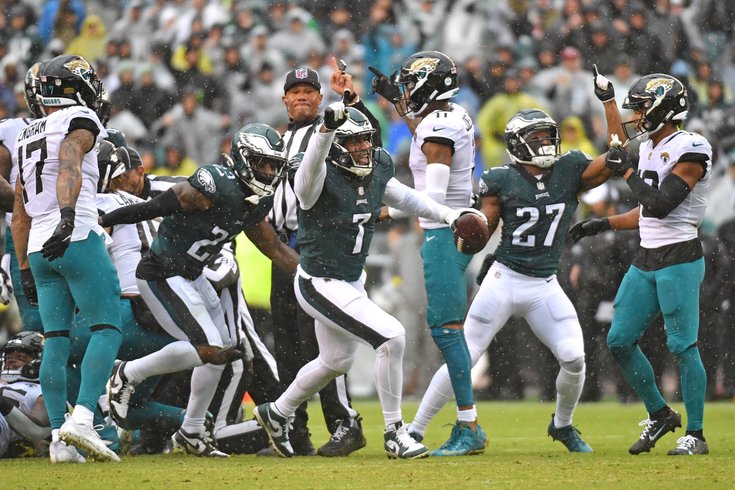 After a slow start with the Eagles falling behind the Jaguars 14-0, the Birds leaned on their defense and their running attack to come back to beat a good Jacksonville squad, 29-21.   The Birds were hit with a punch to the ribs, when a Jalen Hurts pass was knocked up in the air and picked off by the Jaguars defensive back Andre Cisco and returned for a touchdown.   Despite trailing 14-0 after Jacksonville put together a scoring drive, there was no panic on the Eagles sideline. They kept their composure and focused on doing their jobs better. Ultimately with the defense leading the way, they put together a comeback that ultimately gave them a win.

It was an especially big day for Eagles running back Miles Sanders. They fed him the football, as I thought they would and as usual he was running hard all day long.  He carried the ball 27 times for 134 yards fot the biggest day of his pro career.  I made it a point to talk about Sanders on Sunday morning on the FOX29 Game Day Live Show, which I appear on every Sunday morning from 10am to 11am. I let Howard Eskin, Dave Spadaro, sports anchor Breland Moore and audience know that Sanders was going to be a key to the game because the weather was going to force both teams to run more often than normal and that the Jacksonville defense was going to try to take away the running of Hurts. The game played out just like I thought it would with Sanders carrying the ball 27 times which was the most of his NFL career.

Another huge play occurred for the Birds, when cornerback James Bradberry intercepted a Lawrence pass on the Eagles seven yard line.  The Jaguars were going in for a possible score but Bradberry stepped in front of pass play was able to pick the throw to shut down the drive by Jacksonville.  They were down in sure field-goal position and they were trying to go in for a touchdown.  The Eagles defense had five takeaways, which included four fumble recoveries and one interception.  Looking back at the victory, these turnovers were the keys to the victory.

Birds Show Us How To Deal With Adversity