For Westbrook To Play On Sunday It Would Take A Miracle

With the game less than 48 hours away, Andy Reid refuses to rule out Brian Westbrook playing despite the fact that he hasn’t done any exercise since Monday night.

Reid says he’s still holding out hope but truth of the matter is that he continuing his game plan of keeping the Giants guessing.

He knew if he had proclaimed Westbrook out of this game earlier in the week, he would have been doing the Giants a big favor.  They wouldn’t have had to use up valuable practice time preparing to stop him.

On Wednesday afternoon, Eagles trainer Rick Burkholder went through all the things that must happen in order for Westbrook to get back on the field in a game.  Burkholder is on a committee which oversees concussion injuries for the league.

I don’t see any way all of that can happen between now and Sunday afternoon for number 36 to be out there playing on the Lincoln Financial Field turf.

First of all he would have to workout and show that the physical exertion doesn’t bring back the concussion symptoms. 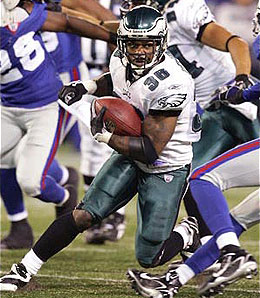 Next up he would have to practice and be examined again for his body’s reaction to the work.

Finally he would be cleared to play in a game.

How could all of that happen right now with game time being Sunday at 1pm.

Eagles full back Leonard Weaver did say that he’s improving and coming along.

Charlie Should Have Sent The Runners In The 8th

McNabb Picking The Phillies To Win It In Six