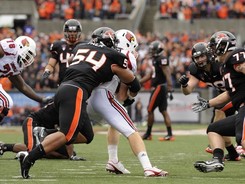 There are numerous reports coming out of the Senior Bowl practices in Mobile, Alabama that Oregon State defensive tackle Stephen Paea suffered a knee injury that is feared to be a tear of his lateral meniscus.   He hurt the knee on Monday and is undergoing an MRI examination today.

Paea was the Defensive Player of the Year in the Pac-10 and expected to be a number one draft pick.  Most draft experts had him pegged to go late in the first round or early in the second.  Paea has great quickness and strength, but he’s not a huge defensive tackle.

Eagles Linebackers Coach Bill Shuey Has Been Shown The Door