Third Day Senior Bowl Practice: The Good And The Bad 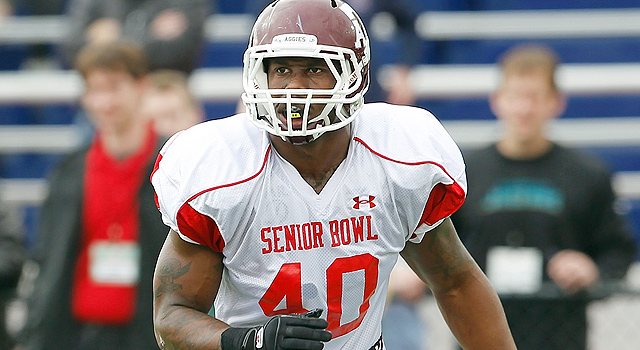 One of the cornerbacks at the Senior Bowl, who the Eagles probably have their eyes on is USC’s Shareece Wright.  He turned heads in the first couple of days and did the same thing today. Wright loves to walk into the face of wide receivers and beat up on them at the line of scrimmage.

Wright has the toughness, He is a physical cornerback who has the ability to both back off of wide receivers, back pedal on the snap of the ball and break on the ball when it’s thrown.   He’s got good speed but I don’t think he has blazing speed.

I’ll be very interested in how he plays in the Senior Bowl game this Saturday, but he has made himself some money at the workouts this weekend. He’s a name to remember as we approach the combine and draft day.

Another cornerback Rashard Carmichael of Virginia Tech showed well on day one but he sprained his ankle and hasn’t been able to go in the last couple of days.  Carmichael had showed some standout playmaking ability on that first day.

There are a line of player personnel people who have been raving about Texas A&M linebacker Von Miller.  There’s a reason he led the nation in sacks a year ago with 17.5.  He’s been running around the tackles like they’re standing still.

He’s likely to go very high in the first round especially if he does a good job against the run.  He has to show he can play three downs to a be a high first round pick.  I wasn’t wowed by what I saw of him during the Senior Bowl team drills.

Cameron Jordan of Cal will get a lot of attention from 3-4 teams because he can do it all.  He may wind up being the best defensive player in this game.  He’s quicker and stronger than anybody he faced in Mobile.

If he goes to the right team and has some help, he could be a great NFL defensive lineman.

NFL Network’s Mike Mayock has come my way concerning Alabama offensive tackle James Carpenter.  Yesterday, Mayock was talking about him as if he were a sixth and seventh round pick, but I got a look at him yesterday during their workout in Mobile and I saw a player who might be the best one of the best tackles i”ve seen during all these workouts.

Joe Schad speaks highly of Missouri quarterback Blaine Gabbert.  He’s got great size, a tremendously strong arm.  Still the best quarterback that I have seen at the Senior Bowl workouts is Colin Kaepernick of Nevada.

First of all he’s a great athlete who happens to play the quarterback position.  He’s got a strong arm with great speed and size.  Of course he’s got a lot to learn but the success of other athletic quarterbacks has to help him when team consider him in the draft.

Washington’s Jake Locker is still a mystery.  He’s got great raw skills but his accuracy still is wanting.  Locker doesn’t look comfortable in the pocket.

TCU quarterback Andy Dalton has been anything but special.  His arm isn’t strong and he hasn’t been accurate at the Senior Bowl workouts.  He needs to play well in the game on Saturday and hopefully make up for what has been a mediocre work week.

I’m not worked up about Vincent Brown of San Diego State.  Yes he did catch the football at the Senior Bowl workouts, but he’s got no speed.  He will play in the NFL and be a good player for the right team, but he’s not a game changer or difference maker.

Wide receiver Titus Young of Boise State has had a big week even though he’s a little guy.  Young has game breaking speed and the quickness to make plays on offense and in the special team battle.

Another wide out Leonard Hankerson of Miami has had a very good week.  He’s got good size and good speed, but not great speed or quickness.  Hankerson ran crisp routes, caught the football consistently and made plays in the last three days of workouts.

Third Season Is A Charm For Sixers

After Making $1.9 Million In Playing Time Bonuses, Vick Is In The Presidential Suite

Good Stuff G.
I like the players from Alabama..Coach Saban has his kids physically tough and mentally tough
and with his NFL Coaching/Workout experiencem, it seems like a lot of the players are just more mature and ready for what it takes to play in the NFL..
Is WR Julio Jones from Alabama there this week.. I think he’s the best overall WR in this draft at
6-4 220lbs and physically strong..

Jones came down and paid a visit but he didn’t worked out. Julio Jones is a specimen and he’s tough as nails and you’re right about Nick Saban and his players. He demands toughness. Mark Ingram is going to be a tough, physical back for somebody. He does remind me of Emmitt Smith. Jim Harbaugh believes in tough football players also.

Hey G
How about 2 players from Temple
Their big DT Wilkerson and Safety Jarrett.. These players are rated pretty high in their
respective Positions.. are they down in Mobile competing.. How do they look
I wish COach AR would believe in being more physical than relying on pure speed and finesse
You can’t be a physical team if you don’t belive in the run.. and this is Andy’s problem..

The Eagles select Jake Locker with their second round pick after getting a high second for Kevin Kolb. Locker is athletic and gives Andy another project and similiar type of player as Vick’s backup. This is a joke, but actually could happen if Locker falls in the draft.

Are there any defensive players who project around the Eagles pick that we should look out for?

Thanks for the report G. Wish you worked for the Eagles.

Us Eagles fans got that Howie Roseman on the scene determining our fate….Ohhh brother….

Here are some Senior Defensive Players that project to be availalbe around the Eagles Picks in the 1st 3 Rounds to check on..

Remember that no Juniors (who declared for the Draft) are allowed to particiapate during Senior Week in Mobile..

I would…. Trade for fat albert, sign mancow from new england, draft a CB in round 1 and make a play for either of the big lb’s in FA.

These signing would be gravy but can be addressed with the draft
Sign 1 Safety (Dwan Landry,or Eric Weddle or Melvin Bullitt)
Sign 1 OLB (Steve Tulloch or B Leber or James Anderson or S Burnett)

This 2011 Draft is very good and deep in 3 areas OL/DL/LB (where the Eagles have big needs)
but is pretty think everywhere else like the Secondary/QB/RB/TE/WR
This is not a good draft for CB’s after the top 2 players in Peterson/Amukara who will be long gone befor the Eagles Selection. The Eagles Secondary cannot wait for 2-3 to develop a good one, they need a proven player who can come in and start next season opposite of Sammuel, then re-sign D Patterson and have him and Lindley be the back-ups and then draft 1-2 CB’s in the mid rounds

If the Eagles made these moves, then they can concentrate their top picks (in the first 3-4 Rounds)
to add quality depth to the OL/DL/LB groups and could really be legitimate contendors for the
Super Bowl for the next 3-4 yers… If they don’t address the DE/CB/OL needs with proven players now, then they will not be legitimate contendors for the foreseeable future and then once Coach Ar is canned in 2012, they will have to rebuild again and will take another couple of seasons to be competitive again.. This Team/Franchise can be on the cusp of a great run ove rthe next few years,, but if they do little, and strictly rely on the draft and bottom of the barrell free-agents or players off of injuries.. then this Team/Franchise will struggle like they did back in the 90’s and then I am going to blame some of the people at the NovaCare Center,..