Pittsburgh Coach: “Andy’s Job Is Probably On The Line” 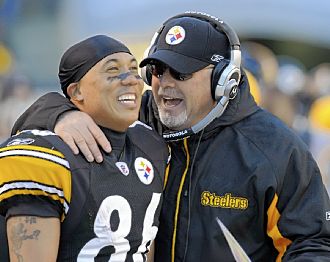 Pittsburgh Steelers offensive coordinator Bruce Arains said he thought Andy Reid’s job might be on the line, when responding to questions from the media today in Dallas.

Normally coaches are very careful not to say something like that in public unless they’re sure that it the case.   Many want say even if they’re sure about it.  I don’t think Arians has any knowledge of Reid’s job being on the line, but he did say it, according to Jeff McLane of Philly.com

“Andy’s job is probably on the line,” Arians said earlier today. “But I know this — he replaced [Castillo] with a good offensive line. Howard Mudd is the absolute best. The quality of the staff is there. Now it’s just a matter of game day and how they’re going to handle it.”

I remember when Arians was the head coach of the Temple Owls.  He was a good coach.  The Steelers offensive coordinator is used to making calls during the game.  He knows how to get a feel for the way his team is doing and he has been able to come up with the call that puts his squad over the top.

This is something that I had written early about Juan Castillo which he needs to learn and get used to doing.

It may seem simple but you never know how somebody functions in that situation with the pressure on.  Some coaches are great during the week and fantastic on the sidelines until they’ve got to make a call with the game on the line.  Some coaches have problems managing the clock and timeouts.

Castillo hasn’t had to make any calls during the games as an offensive line coach.  He would just stand and watch, once he sent his five guys out there. That won’t be the case any longer.  He’s going to need to make calls immediately with the world watching and the game undecided.

DeSean, Herremans & Jaamal Go On The View For Bullied Youngster