The Good, The Bad And The Ugly Of Super Bowl XLV 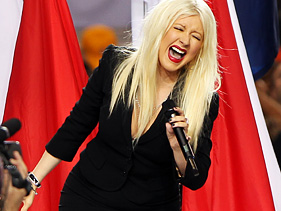 THE GOOD:  Aaron Rodgers was the best player in this year’s Super Bowl.  It was one of the most outstanding performances by a quarterback in the history of the game.  He threw for 304 yards but could have had much more if his receivers hadn’t been dropping the ball.

Greg Jennings made some big catches across the middle and came down with two touchdowns in what was an outstanding performance despite the Steelers focusing on taking him away from Rodgers as a target.

I thought there were a number of good commercials in the game.  A number of the Doritos commercials were pretty good.  I’m not talking about the dude sucking the other dude’s finger.

I liked the Snicker’s commercials and thought both of  the Eminem commercials were okay..

The Faith Hill commercial with the boyfriend and girlfriend was funny.

THE BAD:  Singer Christina Aguilera, who has a great voice was terrible in singing the National Anthem because she got the words wrong in the Star-Spangled Banner. I think that she was going too far with trying to give her version of the anthem rather than merely singing it.

She released a statement apologizing for her performance:  “I can only hope that everyone could feel my love for this country and that the true spirit of its anthem still came through.”

I thought the Black-Eyed Peas did a good job with the dancing part of their performance, but the sound was terrible.  First of all they can’t sing outside of a studio and the volume level was too low.  How could you mess up the sound so badly in such a big event?  The visuals were good but the audio was horrible.

The Green Bay Packers receivers Jordy Nelson and James Jones dropped a lot of good passes from Rodgers.  Nelson made up for it with a number of important passes that he did catch.

Ben Roehtlisberger played a poorly.  He threw two interceptions and one of them was returned for a touchdown.  Big Ben missed open receivers a number of times and he shouldn’t have been throwing to Mike Wallace with their season on the line.  Hines Ward is the guy with the experience that would warrant him being thrown to in that situation.

Overall I thought this was a bad year for commercials.

THE UGLY:  The Doritos commercial in which the guy sucked his co-worker’s finger then was smelling the pants of another co-worker was sick.  He would be the kind of guy who you stay away from.

That 52 yard field goal attempt by Pittsburgh’s Shaun Suisham was about the worst that I saw all year.  That kick had no chance and looked like they had let one of the offensive linemen try to kick the field goal.

Dallas Cowboys owner Jerry Jones and the NFL were trying to put 400 people in seats that the local Fire Department felt were unsafe.  How bad must those seats have been?  You know it had to be seriously unsafe for the Fire Department to interfere with fans at the Super Bowl.

What did you think of A-Rod being fed grapes by his girlfriend Cameron Diaz?  I thought it was something that is best done in private.  A-Rod will have to live down that picture when he gets to spring training.

No Truth To Rumor About Jon Gruden Replacing Andy Reid

The Packers had 3 starters leave the game and had nunerous injuries during the season and still won the Super Bowl because of outstanding coaching and depth. The Eagles loose a questionable middle linebacker in Bradley and fans like Schiller make excuses for their poor performance. The Eagles have second and third stringers and call them starters. Their lack of depth and coaching philosophy make me puke.

big e – ur right.
after the season gb had, you play with what u got and get it done no matter what
or you go home and watch. no more bs no more nonsense
win it or get plannin on the next season to win it right
lets go birds, fall 7 times get back up 8

A Good and Exciting Game is the only thing that saved this entire Super Week
in my opinion. Lots of issues.

Take away Packers QB play of Aaron Rodgers and maybe WR G Jennings,
Did anyone else’s play really look like they were on top of their games
Drop passes, Poor passes and Interceptions, missed open receivers, Stupid penalties, Packers win by rushing the ball 15 times total (land the last 2 rushing attemps were kneel downs to close the game out)
Where was the The cvaunted Defense of the Steelersr (Lb Farrior looked lost in pass coverage) and LB Harrison and Woddley were simply average)
CB (#22-Gay) looked like he didn’t belong in the NFL, he never had sight of the ball once leaving the QB’s hand.. he was constantly not ready or never saw the ball coming.. he was embarrasing to see on the field and then Safety T Palomula whose play has really struggled since his injury in early December and he just didn’t play average, he was poor in pass coverage all game
I”’ll be honest, the Eagles Secondary did better versus these Packers WR’s
which I know isn’t saying much, but the Steelers didn’t get it done with their
front 7 and pass rush and QB Rodgers found open receiver after open receiver and if it wasn’t for some drop passes, this game could have been a blowout for
WR Jones dropped a gimmee TD and NElson/Swain dropped a few more that would have gone for big gainers..

why did Big Ben throw 40 times when Steelers are a running team (at least balanced…..they ran 30 against ravens and jets doesn’t make sense….diff outcome in a close game if it is balanced Ben would probally not throw 2 costly int

it felt like Reid coaching when Steelers 3rd and 2 near 50 they pass when they usually smash it….so it was incomplete drive over….just dumb

It obviously wasn’t about the United States of America, that gave that little slut the opportunity to make millions of dollars. Nope. It was was all about Christina Aguilara. She must be a lib. The most self centered people on earth!

seriously get this kim kardashian commercial off the website, I can’t not watch it.

Is that a picture of Cindy Lauper singing? Did having a baby age Agiulera 40 years.

The little Darth Vader Boy being given the “Force” by his father. His reaction is priceless.

Aguilera is a Bimbo….Stop using the national anthem as a platform to bring attention to yourselves. the halftime show by Black eyed peas was played out and showed no energy. you would think with all the money the NFL brings in they would have a better halftime show.

I think they should have had some Texas bands
like ZZ Top, and even a Country Music band is better than that crap we saw last night..

NBC Today show unmasked Darth Varder. The Kid looks just like Luke Skywalker and his mom is Gorgeous. Unfortunately he has a pacemaker and is only 6 years old.

Best commercial in long time. Finally the man/Father does not have to be a bafoon, but indulges his son’s imagination after the mother could care less.

runtheball – hey now, no need to bring out political opinions. Especially if your going to talk in ironicly ignorant cheap shots

self centered libs…i am conservative and don’t see glen beck,rush limbaugh, george bush helping people over alot of libs….where was bush in the first 4 days of katrina. Carter was a ave president some say bad but helps people in general for example ….build houses for needy after his presidency which shows his true character