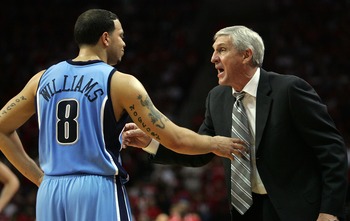 Long-time Utah Jazz coach Jerry Sloan resigned from his position today.  He has coached his last game for the team and leaves after 23 seasons and 1,127 wins.

It stunned NBA fans when they heard what happened today, but it didn’t stun people close to the situation.  Two strong-willed individuals at the top of the Utah Jazz organization were butting heads and something had to give.

I remember Sloan playing for the Chicago Bulls with Norm Van Lier and Bob Love.  Sloan and Van Lier were two of the toughest guards in the league.  They played tough defense and took no prisoners.  Those guys would hit you with an elbow to get themselves some room to get a shot off and they were quick to go on the floor for a loose ball.

ESPN’s Chris Broussard says  Sloan and his star point guard Deron Williams were butting heads for awhile now and the battle came to a head.  According to Broussard, a few times at the end of a number of game, Sloan called a play a couple of times, but Williams went in the game and ran a different play.

It upset Sloan more than it did Williams.  The star point guard apologized for not listening to Sloan and thought it was going to be put in the past, but Sloan wasn’t willing to let it go.

He started saying, “He was done”,  and a number of players heard it.  News got back to the front office, so they met with Sloan and tried to talk him

out of hanging it up, but the veteran coach wasn’t about to listen.

“My time is up and I’d like to move on….” Sloan said, “I’ve always thought about when am I going to retire, how is that going to happen. There’s always a feeling that hits you, it seems to me, that’s a little bit similar to the one I had when I got fired. So, I had a feeling it was time for me to move on.”

“Few people have epitomized all the positives of team sports more than Jerry Sloan”, Stern said.  “A basketball lifer, Jerry was as relentless in his will to win on the sidelines for the Utah Jazz as he was as an All-Star guard for the Chicago Bulls. In over two decades as a coach, he taught his players that nothing was more important than the team.”

Sloan is falling on the sword for the organization