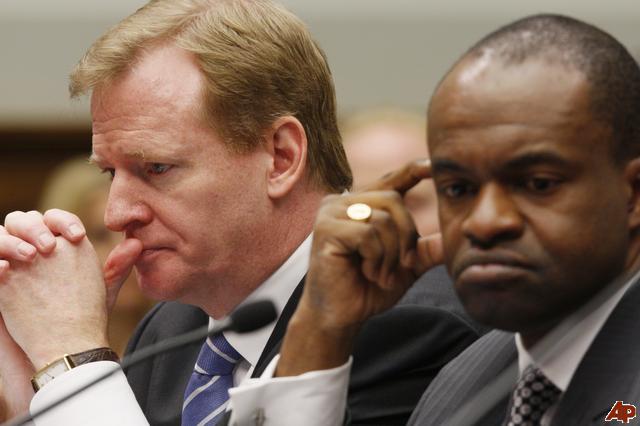 It looks like we’re headed for a NFL work stoppage, which will begin on March 4th, if something isn’t done quickly.  I could see it costing the league and the fans quite a few games next season and maybe even all of them.  It’s fairly simple what the problem is going forward.  The owners think that the agreement which they signed in 2006 was far too favorable for the players.

A number of owners have told ESPN’s Chris Mortenson that they’re willing to sacrifice the season in order to get a better deal.  That’s some very,

strong talk when you realize that owners will be paid $4 billion dollars by the television networks whether they play in the fall or not.

NFL Commissioner Roger Goodell has promised to have his $11 million dollar yearly salary reduced to a $1 if they don’t work out a deal by the deadline which is March 4th. Not to be outdone DeMaurice Smith has agreed to have his salary chopped to 68 cents if they don’t get something done.

Doty decided the Reggie White case which created free agency in the NFL. The NFL wants to free themselves of Doty as soon as possible.  In fact they released the following statement.

“As we have said all along, a new CBA has to be hammered out at the negotiating table, not in the courtroom. If the union commits to invest as much time, energy and other resources in negotiations as it has in its litigation strategy, a new agreement could well be reached by March 4.”

Hopefully you have plenty of NFL games on tape because that might be all the NFL action you have to watch during the fall of 2011.

You might want to take a look at this entry from profootballtalk.com., before you talk about the NFLPA wanting a 50-50 split and making it look like the owners don’t want to do a deal:

Thus, an offer to take 50 cents of every dollar represents no concession at all.”

Of course, after the proprietor of that site, Mike Florio made that last statement, then the next big headline on his site is: “League Should Be Blamed for Breakdown in Labor Talks.”

Huh??? This guy is a lawyer, allegedly, and says in one breath the players made no new proposal that was different from the present CBA, but then says the league should be blamed because they got up and walked out. The thing is, Kevin Mawae, who’s the president of the NFLPA, has acknowledged, more than once, that the players got a great deal the last time. But like in all negotiations like this, when one side got a great deal, they don’t want to give anything back. This has the makings of worse than 1987 all over again.

If the owners and the teams decide they don’t want to play this year so be it.But when they decide to play they may find that the fans have turned to baseball and basketball or hockey and couldn’t care less about football.Many companies have been hurt their business by calling strikes . So good luck to them both..

Guess we’ll be bringing back the Philadelphia Stars LMAO!!!!

Agreed Bobby……. Baseball took a long time to recover from their strike, and some might argue that they still haven’t fully recovered.

Hockey hasn’t been the same in America since their strike and they might never recover, because hockey has almost become an afterthought to most Americans now.

Football is most Americans most beloved sport. Don’t be greedy and take that for granted, because it might come back to bite you in the ass. They better get something hammered out.

Owners should make more money then the playerss. There the owners lol. but i dont know much about all the details and how they work so i cant really say more then that

Paulman’s Plan to resolve the Players/Owners disputes and to get a new CBA in place..

#1) Split Total Revenue 50-50% between the Players/Owners
#2) Establish a Rookie Wage Scale Deal for 3 years Contracts and then a player can become a Free-Agent after only 3 years of playing
#3) Increase teams rosters from 54 players to 60 players which will add
200 jobs for the Players and their Union
#4) Increase Practice Squads from 6 players to 10 players on each team and make Practice squad players only belong to team that places them there and have a 1 year Guarantee contract which adds another 125 jobs to the players and their Union
#5) With the increases in Player Roster and Practice Squads, the Owners get their 18 games schedule which will increase the total Revenue for everyone
#6) The NFL also expands the Playoffs with 8 teams (no byes) from each Conference which will increase the Total Revenues for everyone
#7) The NFL agrees to cover all Health Insurance to Players only after 3 Years of Service
#8) Teams to eliminate the “Franchise Tag” and either sign the player or let him go to free-agency

It’s like war. Everybody is so tough until their son gets killed. Or their house is bombed. Or until they see somebody get their head blown off.

We are pain and pleasure creatures. Each side has enjoyed so much pleasure that they forgot what real pain is. They should make each side live on the east side of detroit with no police. Or north philadelphia with no electricity.

If most men knew what was going to happen to them in divorce court, they would take their eyes off the booty and put more focuse on her mind.

Go ahead and stop. Each side needs the pain to recalibrate. Fans will find something else to do.

I’ll consider it an extended bye. Crystal Ball Andy is alot of things, but he’s pretty darn good with extra time to prepare.