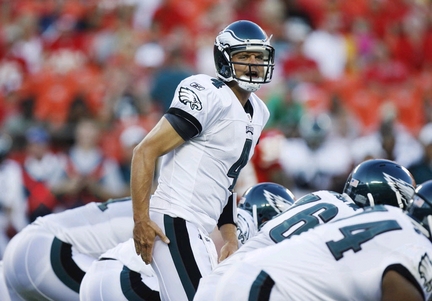 Mike Sando covers the NFC West Division for ESPN and he had a San Francisco 49ers fan ask him why NFL teams value unproven college talent over proven NFL veterans. He was aiming the question at Eagles backup quarterback Kevin Kolb. Everybody knows that the Niners are in desperate need of a quarterback.

Here’s what the fan wrote:

“These are unproven, college players. Kevin Kolb has been an NFL starting QB, has had success, and has a nice upside. If he were a collegiate player, he would surely go high — perhaps even with the No. 7 pick if he were as he is today. Can somebody, anybody, please, please give me a triple Oy Vey? I’d be all teeth to see the 49ers land Kolb and it doesn’t seem like a No. 7 pick is too much of a reach, given the state of the QB situation. Of course, I’d rather trade a large turkey leg, a Prince Purple Rain CD, a sack of frozen burritos, a case of frozen Otter Pops, a BBQ-slathered porksteak, and a gigantic bowl of corn for Kolb. Smile.”

There are NFL fans all over the league, who are desperate for their teams to make a trade and obtain a quality quarterback. Right now, Kolb’s value is at it’s highest point. We don’t need him to take another snap. We need to get him on to the roster of another team with the quickness.

You know the Eagles are somewhere saying yes, he’s worth the seventh pick and they’re saying it with a straight face.

What do you think we can get for Kevin?