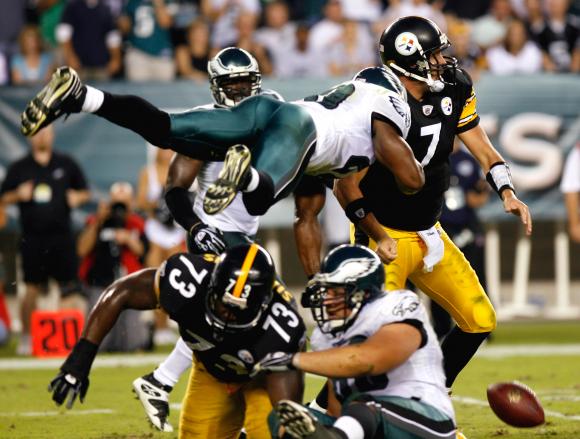 I”ve had arguments with people and realized that I was wrong and continued to argue even though I knew I was wrong because my pride didn’t want to admit that I was wrong. That’s the case now with Eagles President Joe Banner. I know it hurts, but there’s no way

in the world that Banner can believe what he said on 610-WIP the other day.

Joe Banner is far too competitive to not admit that the statements he made and no where near being the truth.

Let’s take a close look at what Banner said. Understand he said this after making a number of appearances and talking about how much everybody who works with the Eagles wishes they would have won a Super Bowl. He talked about the pain which all of them experience each they finish a season and don’t win a Super Bowl.

He said the following statements after talking about how shocked he is that Andy Reid hasn’t won a Super Bowl yet. How can you cry

and bemoan all that failure, then turn around and proclaim that you’re as successful as the Steelers?

“Banner tried to assert that the six-time Super Bowl champion Steelers, who have appeared in three of the last six Super Bowls and won two of them, really aren’t any more successful than the Eagles on balance, because they haven’t made the playoffs nine of the last 11 years, or been to five conference championship games in the last decade, the way the Eagles have.”

Despite the fact that he may pain him severely, Banner has to walk back what he said. Going to the playoffs or going to the Super Bowl and not winning it are miles away from winning it all. If you don’t believe that, then go to Pittsburgh right now and try to find people who think they had a great season in 2010-11.

I understand that it hurts to get close and lose, but Banner is going to have to publicly walk back what he said.

Mid-Season Grades For The Sixers

I have the Eagles as the 7th-8th best Franchise in the NFL over the last 10 years or so.
I have the Patriots,Steelers,Colts,Ravens,Giants and now the Packers as better run origanizations with better overall Coaching,GM’s, Scouting, Player Personnel and Drafting success than the Eagles.. I also have some teams
like the Saints,Falcons,Jets quickly moving up to join the Elite Franchise’s
So the EAgles better get a movign or they will continue to fall backward and towards the middle of the pack…

paulman no, strongly disagree
steelers, patriots, colts yes
ravens absolutely not
i see why you put the giants and packers in there, because they have a ring
but overall, like i said the steelers, patriots, colts
we have been excellent throughout the season and making the postseason
the only thing we are missing is a ring, but were spoiled for the most part
just think about it, dont judge off of a possible fluke year by the giants
were always there, and will finally get our share of the lombardi
and we will do it under andy reid

i would have the ravens above the birds because of their defense and cornerstone players. of the above teams how many of them have a strong gm running the show ? is roseman considered one now or is he just an assistant to the control freak. the other thing is we are younger than all those other teams with exception to maybe the pats.

G you are going to offend schiller by writing about Joe Banner like this. Banner know more than anyone on football. I have to disagree though, I believe he and Lurie do think they are successful as the steeler. It wasn’t too long ago when they were comparing themselves to the Pats. Remember calling themselves the “Gold Standard”? This why Reid is still here and why we don’t have a ring. In their eyes they are successful. In the meantime we are screwed.

BTW …If you lose in the SB , or go 1 and 15 its the same….a failure of a season. Without a ring your season is a failure.

ozz, you couldn’t be more wrong on either of your posts. I’m not offended because I don’t feel any attachment to Banner at all, and I don’t particularly like the guy. I think he put his foot in his mouth here, and I regard him the same way I regard any salesman/PR person – someone who is just ‘blah-ing’ for his company.. that’s all. He’s kinda like a used car salesman local commercial guy to me.

And if you agree with Ricky Bobby (that was a JOKE for a reason) then, that’s just ridiculous. Have you ever enjoyed an Eagles regular season win? If not, what da hell are you doing here. If so, then you know the value of that – I’d take 10 over 1 any time.

Your view of that was extremely limited and juvenille.

You seriously telling me you don’t enjoy regular season games?

I’m not saying the superbowl isn’t the biggest goal or that I’m content we dont have one, so don’t try to twist my words into something I didn’t say. BUT 1-15 is NOT the same as losing in the superbowl. NOT EVEN CLOSE. You’re dismissing months and months of excitment and happiness.

I am embarrassed as an eagles fan having to listen to Steelers fans laugh at what Banner said.

There is no way that you can defend him as an Eagles fan. It is an illustration of how out of touch Banner is.

I belive that an intelligent man like Banner would make a statement like this because they have surrounded themselves with individuals that all agree, never contradict a person in upper managment. The Novacare is filled with people who parrot the party line….never question the direction of the team…so the ultimate results don’t really matter if you spin it the “right” way.

Losers rationalize why they should be considered more than their achievments dictate….winners only have to let the results speak for themselves, and let others declare their greatness.

As much as I love the Eagles, and as much as I will enjoy the season and all that the team does, we must admit that in the end we have not been a championship caliber organization. We do not have the results to back up our pride.

I listened to the interview and nearly fell off my chair when Banner not only compared the Eagles to the Steelers, but suggested the Eagles have been more successful because the Eagles have more playoff appearances during their respective tenures

And green, it is very embarrassing, more so for any fan who buys into this propaganda

As usual you are arrogant, pretentious, and just plain annoying. I enjoy the regular season until we lose. Then i declare the season a failure. I do not embrace mediocrity, as you and your buddy Banner do, I come from the school winning isnt everything, its the only thing.

if he really thinks that then he is the problem!!!!! Fire him tomorrow. What an idiotic thing to say

Banner’s comments perfectly frame the complete reason and rationale behind why the Eagles have yet to win a Superbowl during the Lurie era.

Didn’t listen to/read the whole interview. But after reading these comments it much confirms what I’ve been thinking for awhile now. The problems that every problems with the organization that everyone (including myself) complains about stem much deeper than Andy Reid. Even if Andy Reid is fired I don’t see things changing. Sure, maybe we’ll get better sound bites, better clock management, and maybe more running the football. But we’ll still have the same issues as long as Lurie, Banner, and company and their complacent attitudes are running the show.

Is’nt Philly the most Winning team in the NFC the past 10 years? No team has won more games than Philly except Indy and NE. We are by far the best team in the NFC. Even better than the Packers. We had that game won and let it slip through our fingers. MIssed field goals, dropped passes, and Vick’s last throw. We shot ourselves in the foot in that playoff game.

Winning the most games is great, don’t get me wrong. But it is more than just winning regular season games. If the Eagles went 16-0 every season for the next ten years yet lost in the first round of the playoffs every year would you be satisfied? I sure wouldn’t. Yes it is great being a contender almost every year, but I would gladly trade several years of contending to be a franchise that has won a Super Bowl.

For the record CT,
The Eagles were outplayed and were lucky to get back in the game versus the Packers,,I am not sure whch game you were watching… If their WR Jones doesn’t drop a sure TD pass after smoking past All-World CB Samuel, it would have bneen 24-3 and game over by Half-Ttime… Eagles were manhandled at the line of Scrimmage, Out-Coached and Outplayed.. that simple

This Banner guy is a pathetic nerd who cares nothing about true Eagles fans when making such stupid statements as claiming there’s an argument that some might say the Eagles have been just as, if not more successful in the last decade in comparison to the Steelers.

It makes me wonder how does the Eagles truly measure a successful season?

In the interview he also admitted that the Eagles does not value the linebackers position in comparison to other parts of the defense. The linebackers on the team must feel like crap hearing that from the top brass. They are interchangeble parts that will never command top money compared to linebackers around the league.

There’s some organizations that would never equate success with just a playoff appearance and that’s the biggest difference between the Eagles and teams that have actually one the big one.

I guess when you’re use to losing, the next best thing is to show everyone how you can be successful while losing.

So, our Eagles are the most successful losing team in all of sports.

I feel much better now.

Does he look like a guy that eats sleeps and breathes football?

Does he look like a guy that took sports seriously in highschool?

Does Joe Banner look like he gives two shits about winning?

NO!!! He’s a useless twat that only gives a crap about the bottom line. You guys are nuts to think this guy cares as much as the fans about winning the superbowl. We ingest it, he cashes his paycheck.

@greenfan – Couldn’t agree more with every statement you wrote.

Butch007
February 18, 2011 – 9:26 am
Banner’s comments perfectly frame the complete reason and rationale behind why the Eagles have yet to win a Superbowl during the Lurie era.
EXACTELY BUTCH