Mid-Season Grades For The Sixers 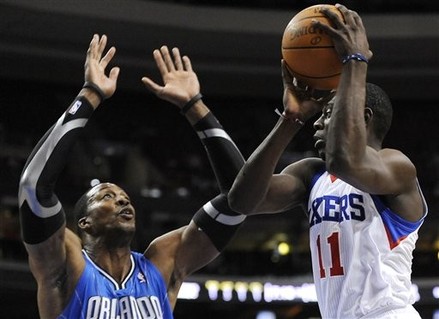 Who would have thought that headed into NBA All-Star weekend, the Philadelphia 76ers would’ve matched their win total for the 2009-10 season. That’s right the Sixers finished the 09-10 season with 27 total wins (the 27th win occurred 4/10/10) and have already won their 27th game this season (27-29) with 26 games still left to play.

What’s even more shocking is that following the All-Star break, they have three very winnable games in a row (Washington 2/23, Detroit 2/25, and at Cleveland 2/27). If the Sixers win those three games, they will find themselves above .500 for the first time since they started the 09-10 season with a 3-2 record. Wow!

Ok but let’s not get ahead of ourselves and just enjoy the ride, because after all, there hasn’t been this much excitement around the team since they traded for Chris Webber in 2005.
With all that being said lets take a look at some of the positives and the negatives for your 2010-11 76ers at the “mid-season” mark.

When the season started I wasn’t sure if Doug Collins was the right man for the job, and after a 3-13 start I was almost certain. But as I watched his interactions with the players on the sideline, I realized he was reaching the team. He made the game fun for the players and was teaching them how to play the “right way.” Well as you can tell by the teams’ success, Coach Collins has his them playing well and has brought excitement back to a city that has been starving for good basketball. I know Collins will not win coach of the year, mainly because of how well Gregg Popovich has the San Antonio Spurs playing, but he should get some serious consideration.

Jrue Holiday has blossomed into a very exciting player to watch and if he remains hungry, he will be a star in the NBA. The 20-year

old guard is averaging 13.8 points and 6.2 assist this season and had some of his best games this season versus the NBA’s elite point guards. Sky’s the limit for Holiday.

Andre Iguodala’s numbers are slightly down compared to his career averages, however, if you’re watching the games you have to notice how he is playing stellar defense along with becoming a leader on the team. Night in and night out, Iguodala is asked to guard the best player on the opposing team and has done a superb job (most notable holding Carmelo Anthony to 12 points, and Kobe Bryant to nine). Don’t let his contract distract you from noticing how much his game has matured and what he means to this team.

Elton Brand is looking like the guy they signed him to be. He is averaging close to a double-double and appears to be the veteran presence this young club needs. Brand has provided the Sixers with big shot after big shot and is an extension of Collins on the court.

Thaddeus Young is back. He has recovered from the Eddie Jordan plague, something that looked career threatening. He no longer settles for shooting jump shots. Instead he is slashing to the basket which is his strength. Young is asked almost every night to guard players that are bigger and stronger than him and he doesn’t complain. He just goes out there and does what the team asks him to do. A real team player if you ask me.

It is hard to imagine where this team would be without Lou Williams. Williams can be defined with two words, instant offense. His defense could use some work, but for what he brings on the offensive side, along with hitting clutch shots, I’m willing to live with his

For all the winning this team has done, they still are missing a true star. A guy that you know will score 25-30 points every night and could possibly go off for 40 if he is on. Unfortunately for the 76ers, in order for you to be a contender you need a player like that. Yes, the mere fact that the Sixers are “back” is nice, but at the end of the day it’s all about winning. Not winning 45 games in the regular season, I’m talking about a championship. And let’s be honest, for as exciting as this team is to watch, they are far from a true contender.

Not only are the Sixers missing a star, they are also missing a true defensive presence in the middle. Don’t get me wrong, I like Marreese Speights, but he is far from a defensive threat. The team needs to find a way to get a “goon” on defense to let the other team know not to attack the paint.

I give the Sixers a B- so far. It’s hard give a real high grade to a sub .500 team; in fact I may get chastised for giving them a B-. However the team is on the rise and is ranked 8th in the NBA according to ESPN’s John Hollinger’s power rankings. So maybe I’m not too crazy after all for giving them a B-.

Doug Collins is doing a great job with this team. I know that a lot of people are saying it, but I just want to reiterate. The fact that I have actually watched the last 5-6 games is big, since I have had no interest in this team for the past couple of years. Holiday is fast becoming the man in town, and he sure is fun to watch. Although Iggy’s numbers are down, he is still playing lock down defense, so I will take that. I think that the problem comes from that they have to many players that need minutes at the same positions which stems from drafting the same 2/3 combo type of guard over and over and over again. I think that Lou Williams helps and hurts this team. Yes he is instant offense, but he takes way too many shots and a lot of those are bad shots. 3s from 5 feet behind the line, shots before the rest of the team has made it up the floor, shots without any passes or penetration. I think that he actually is stunting the growth of the young guards although he is helping the team win.