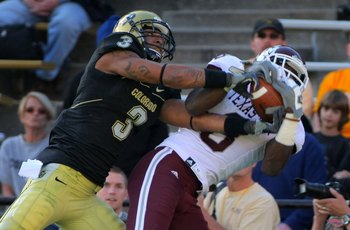 If Cam Newton puts on a great NFL Combine performance, he could vault up the boards, but he’s not helping himself by telling people he considers himself an “entertainer and an icon”. Still I hear that he’s likely to blow the scouts away with his performance. I also hear that the Bills are leaning toward drafting him.

Marcell Dareus of Alabama is gaining more and more traction because he was consistently productive throughout his career at Alabama. Personnel people want to be able to go to sleep and know that somebody they draft at the top of the first round is going to always put forth their best effort.

Robert Quinn of North Carolina has been off everybody’s minds because he didn’t play this year because of a suspension for getting involved with an agent. He’s capable of blowing the scouts away at the NFL Combine.

In this draft, I have the Eagles grabbing their big cornerback Jimmy Williams of Colorado. He would be the answer for all of the big talented wide receivers in the NFC East. They would need to him to start in his first season.