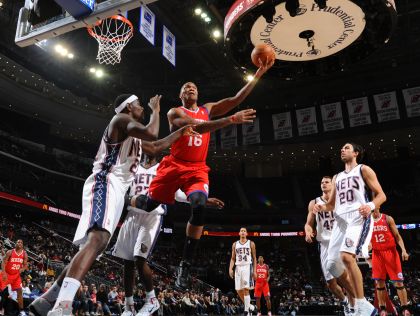 Unless you’ve been living on Mars these past 48-hrs you must have noticed that the Eastern Conference has made a few changes. The New York Knicks have added another star to their roster, Carmelo Anthony, and the New Jersey Nets have added Deron Williams.

So I did a little thinking and tried to figure out whom, if anyone, the Sixers could add to keep up with the Joneses. Unfortunately the answer is nobody right now, however there is one guy that could possibly make the team better that shouldn’t cost too much.

Reports are coming out that the Denver Nuggets are in a selling mode, and are looking to get younger. Apparently one of the guys they’re interested in selling is Nene Hilario. Nene is averaging 15 points and over seven rebounds per game, and would be a perfect fit for the scrappy Sixers team.

So the question you’re probably asking yourself is “who would the Sixers have to give up in order to get Nene?” Well if you’re hoping the answer to that question is Andre Iguodala, I’m sorry to disappoint you. But after toying around with ESPN.com’s trade machine, if the Sixers were willing to part ways with Marreese Speights, a deal may be possible.

Speights should have enough value around the NBA and is still considered a young talented big man with tremendous upside. NBA

scouts appear to love his offense ability and maybe the Nuggets would be willing to overlook his lack of a presence of defense if they’re really serious about starting their youth movement.

Naturally the Sixers would have to send a few more players in the deal to make the money match up along with a draft pick. So I was thinking they could throw in Andres Nocioni, and Darius Songalia.

Songalia is far from a sought-after commodity, however he is in the last year of his deal, and in the NBA a player in the last year of his contract is just as desirable as the head cheerleader in high school. Nocioni on the other hand is a hard working forward who gives 100% every time he’s on the floor, something he hardly does in Philadelphia. Nocioni can knock down an open jumper and brings it on the defensive side of the floor. Those three players, along with a second round pick should get the deal done.

I would love to act as if this is a rumor that I heard from “sources close to the team” and see how many people believed it, but instead I’m simply presenting it truthfully as just an idea that made sense.

I would only do a deal for someone that can elevate the teams play further.

I would dangle Iguodala and look for someone like Dallas to come out.

I think Speights is a keeper and that Hawes is vastly overrated.

atra – intersting, I think Speights isn’t a keeper. I’m looking for any help we can get at the cneter position. I wouldn’t them to give up Iggy for a mediocre Center though….

Looking into the future the sixers are going to get perhaps a 10-12th in the next draft which is bad. So building thru the draft isnt an option. I like Danny Granger I wish we could pull off a trade some how to land him. A legit scorer and the most unsung player in the NBA. Trade Iggy, Turner and a first round pick may seal the deal

Nene is better then mediocre.Compared to many centers in the league he would be a great pick-up. Would be tough to give away Iggy though….i know he hasnt lit it up this year(any year) but he’s still a vet presences that plays D.Would Thad play better if he started there…or Turner? Tough call.

Trade or #1 pick in the draft this year? That would be a mistake.

I would sit tight and continue to let this time evolve and get a full yeaers evaluation of cetain players.. They are a #6/#7/#8 team any way you look at it so continue to play for the future and determine what young players are part of the team moving forward, you break up some of the young guys now for a good veteran for a plapyoff run and you get biounced out in thge 1st Rd anyways, what did you gain..
The NO Hornets are hurting with Ownership Problems and Finances,
I would check to see if C Emeka Okefor and or PF David West were available
for some draft pikcs and the end of the bench fellas in SOngolia,Nocioni,Kapano

I’m with Paulman. I wouldn’t trade anyone this year. Just let the team finish how it is. There’s nothing they can do that would make their playoff chances better. Just evaluate after the season and go from there. I have bigger problems with this roster than Iggy. He can’t help the team overpaid him. Giving him all that money doesn’t magically make him a great player. He is what he is and it’s the organization fault for giving him that money. And the fans are pissed off and him for what? He did nothing wrong but sign a monstrous contract that he wasn’t qualified for. So what was he supposed to do? Say “hey I don’t want all this money, take some back”. Picture that.

The front court is the problem in my eyes. Dalembert sucked but you lost defense and rebounding when you got rid of him. We have too many front court guys that are “in-between” positions and not great at 1. Sounds like the Eagles offensive line.

Yea I agree with you as well Paulman. I actually think trading Iggy and a few others for Nene would make us worse. If there was somehow we could get Nene for some picks and some end of the road players like Nocioni, Kapono and so on then keep Iggy, with Holiday, Turner, and Brand, that’s a decent starting 5. Plus we could then keep our bench together which has been one of our strong points this season with players like Speights and Hawes in the post and Lou and Young spotting at the 2 and 3 when necessary. Either way it is a very big long shot.

That scenario would enable us to compete with teams like Orlando and Atlanta come playoff time. To compete with the Heat, Celtics, and Knicks I think we are a big man away. For instance say Amare would have came to the Sixers. With him and our current lineup we could easily be a contender. The only problem is though big men like Amare, Bosh, KG, Gasol, Duncan, and Howard are hard to come by.

Knicks suck Birdsfan…… They have a lot of offense and absolutely no defense. That is D’Antoni’s calling though. They will be nothing come playoff time. Getting Nene will make us better, but not if we gave up Iggy. We still couldn’t compete with Boston or Miami though.

I stated this draft nite that the sixers should have drafted Damarcus Cousins instead of Evan turner, I’m not saying down the line turner won’t be good but we would be contenders if we had cousins he would have solved our big problem at center, we already have players like turner on our team

And I don’t wana hear that Cousins is a head case, if he’s surrounded around good influences and a great coach he’d be fine. I hope the sixers won’t live to regret not taking that man bc he’s young, big and talented

They should trade for Nene and Gerald Wallace. Wallace is rumored to be traded. This is how they should do it………

Denver wants to unload Nene to get younger.

The 6ers could trade Kapono, Speights, Brackins, and a 2012 1st rounder for him.

How would it be beneficial for both teams?

The Nuggets will get to knock off 6.6mill from Kapono’s contract, and they get a young Center in Speights and a young SF in Brackins to go with a draft pick for next year.

The 6ers stabilize the Center position and give them a better defender in the post than Hawes.

The Bobcats would get a young SG/6th man in Meeks, Hawes would take over for Nazr after this year to compete with Kwame Brown, Nocioni would replace Wallace and they would get a 1st rounder this year.

The 76ers would add a great defender to their already good defensive team, and give them another scorer.

The backups would be weakened, but the starters would be amazing.

Sportsbum there is no depth at pf or center behind brand and nene if that deal was to be worked out, the sixers should stay the course and keep teaching the young talent they already have