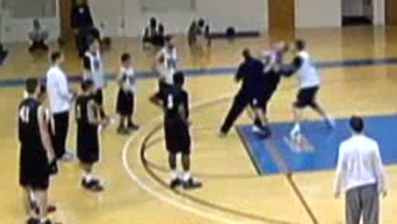 I would imagine by now you have heard about and seen what happened at the Holy Famliy University practice. Coach John O’Connor accidentally pushed one of the youngsters, Mark Kravchuk, and the young mad fell on the court. O’Connor lightly kicked him when he was on the ground. Now Kravchuk and his family want the coach fired and they wanted charges filed against the coach.

I think this is a joke. This young man was bumped by the coach and he fell to the ground. So what, it’s nothing? I”ve seen much worse done and it was no big deal. I think this kid is soft and he should have never even told him parents about it. The coach was trying to motivate him.

I do think the coach should make sure this young man knows he believes in him but the coach is trying to make him better by pushing him. It doesn’t look like the coach meant to knock him to the ground and the little tap with his foot was nothing. All I have to say to the young man needs to grow up. Get back up and battle. This has no place for being taken to court. It’s a bogus controversy.

Take a look at the tape and tell me what you think.

Mr Cobb – oh but for the good old days. Getting your facemask grabbed and jerked around, getting slapped in the helmet, up downs till you thought you were going to puke – not in today’s world. My son’s bball coach yelled at him during a playoff game and I thought the wife was going to lose it, me, I wanted to yell at him too. Its a different world. I ref now, and if two kids get in a fight, we are taught to NOT break them up, to NOT pull them apart, but to stop all other people to enter the conflict by yelling ‘stop’ (but don’t physically restrain) due to liability issues. YOUTUBE, cell cameras and the like make every action immediatley available to the world.

I agree with you 100%, but we live in a world of ‘you can’t be mean to me’ If this were me, I would have been in the coaches office apologizing for disappointing him so much

If you say he accidentally pushed the player, you’re just a liar.

He may have accidentally knocked him in the face, but knocking into him was 100% intentional and idiotic.

Coach should have manned up when he realized he injured the kid and apologized, but he was too proud and now he’s out of a job.

@mugzy…the player has already been quoted as saying that the coach apologized in a private meeting directly after practice. He quoted him as saying that he “stepped over the line” in the drill.

There is a problem with a delayed reaction by the school, but for the kid to file assault charges is over the top. By the actions of his attorney, this kid is looking for a big payday. I agree with G completely.

I don’t think he accidentally bumped into him, but I mean he didn’t mean to knock him on the ground. It was a love tap. That young man needs to grow a pair.

a coach is not suppose to put his hands on his players. if he is such a bad player then what was the scouting crew doing when they put him on the team?

You can make him a man by not putting your hands on someone cause in todays world we have lawsuits and youtube.

i guess its ok if my coach makes bad calls i can snatch the playbook out his hands until he falls on the floor and kick him in the ass and say get the F^&^ outta here.

Everyone deserves a 2nd chance & I hope this coach lands on his feet. I’m sure there will be plenty of head coaches that will offer him an assistant position. That kid needs to act like a man

The kid is a born w a silver spoon p…… . I would love to hear sonny hills take on this Sunday morning

Whether or not the coach crossed the line in what is appropriate, this kid is a soft punk. Pressing criminal charges?! are you kidding?! I hope this young man is NEVER allowed to be part of ANY successful group endeavor. He should stick with solo activities. No matter what business I might own, I would never hire him. His Dad should be ashamed. I’m not even saying I take the coaches side, but the kid’s response reveals a weakness in heart and character.

G… you just said on the air that the coach didn’t make a mistake….are you serious? While i agree this whole situation has been blown way out of proportion the coach forcefully pushed the kid to the ground……and if you look at the video the coach really looks like he intentionally pushed the kid to the ground….look at the coaches’ follow thru with his arms….i’m looking at this as objectively as possible and i think judging by the follow through with his arms he clearly intentionally pushed the player to the ground and i’m baffled by people saying the push to the ground was an “accident”…..plus his angry demeanor towards that player only adds to that point….I respect your opinion tho G I just disagree. I do agree however tho the kid should have never pressed charges and the coach should not have just lost his job.

His nickname should be princess. You should see what they do in mother russia. Everyone in this country is way to sensitive. You all are a bunch of sissy girls or a bunch of punks who have no respect for authority.

No coach will want this kid fearing the same result. The coach hurt himself with the remarks afterwards.

The kid gained a youtube moment and lost any future on the court.

I understand that coaches want their players to be physical and man-up, but this guy crossed the line. There was no reason to do what he did and not be punished. Firing him was extreme, maybe a suspension would have been enough. However, as a parent, if this my kid, I would have knocked him out.
Times have changed – there is a zero tolerance for bullying or “hands-on” approaches to sports coaching. This coach crossed that line and paid the ultimate price – his job!

This “kid” is a grown man. He should have handled like a man. He could have gotten up. He could have sneered, maybe growled a bit, give the coach a look that says “next time you you crack me like that you are going down.” If he did that he would have earned the respect of the coach and his teammates. It would inspire him to better play. The incident would be forgotten

The coach is 5’10” the young man is 6’5″. If you play basketball in college, you get knocked to the ground and elbowed in the face. If he can’t take what the coach did he can’t play college basketball.
He should get a skirt.

The coach meant to bump him, but he didn’t mean to knock him to the ground, but so what he fell to the ground.

The coach tried to instill some toughness in the “girly-man” – if they were tied in the 4th with 10 seconds to go, another defender from the opposing team would have stripped the ball and took it to the opposite end of the court and won the game. He should of had a pair and never let the coach strip the ball from him. If that were real basketball, his arse would of been trampled upon by everyone including his own teammates trying to run down the person who stripped the ball from him. Today’s athletes are some real “softies”. When the coach came behind him after he was on the ground with the so called kick, that was a “let up and hold the aggression type of kick” to not only inspire the girly man but his teammates also. The kid really alienated himself with this sissified move (he does “need a skirt”). By the way if that were bob knight, i would of personally kicked bob’s A^% myself because his type of aggression is that uncalled for type of crap. There’s a difference between a tough coach and a nut job like Knight. Grow a pair “Skirt-Man”.

I won’t defend the kid trying to sue the coach but to say that he didn’t intentionally knock him down is just untrue. If he would have just bumped him it is one thing, but he extends his arm. That is intent.

If you want to say that the kid should be tougher then I agree, but don’t try to tell me that the coach didn’t mean to do it.

funny thing is…. if the kid wouldve jumped up and went spreewell on the coach people would be mad and call the kid a thug… coach pushed him down and kicked him… there are much better ways to motivate kids than that… coach wants to motivate and teach players to be physical thats fine, but that fake tough guy bs doesnt cut it..

Why didn’t the school suspend him for a couple of days and tell the coach to make a public apology? Listening to this guy explain away what he did in basketball terms is like when people defend ugly actions by ballplayers because they are great at tackling or scoring or running or throwing?

The school came up real small.

The coach was wrong apologize for it and lets move on. Too much is made of this nonsense. If the coach had a “pair” he would have stepped like a man and said “I was wrong”. Instead he comes off like he’s woody hayes yo bub take a hike!

Rasheed1, you are so correct!

The coach is a bully. Who you kicking, man?

The most demeaning thing the coach did was put his foot on the young man! Maybe the kid is a little soft, but he was a student and he was humiliated in front of his peers. I think the coach was totally wrong and the student SHOULD have pushed the coach back, I bet that coach wouldn’t have done that to “Tyrone or DeShawn” he might have gotten his teeth knocked out.

The drill is called “combat rebounding”…..Div I basketball is a physical sport….the coach didn’t grab the boy by the throat or throw a chair at him…he was demonstrating the drill and admittedly had contact with the player and the player went down….the coach nudged him with his foot to get him up and back into the drill (much like he would be called on to do during a game)….the player has already stated that the coach apologized in a closed door meeting directly after practice, and said the he had “crossed a line”…

The player on the other hand has criminal charges filed against the coach…hires a lawyer looking to get a big payday from the coach and university…and make an A$$ out of himself on national television by declining to accept the coaches apology.

I still agree with G on this one.