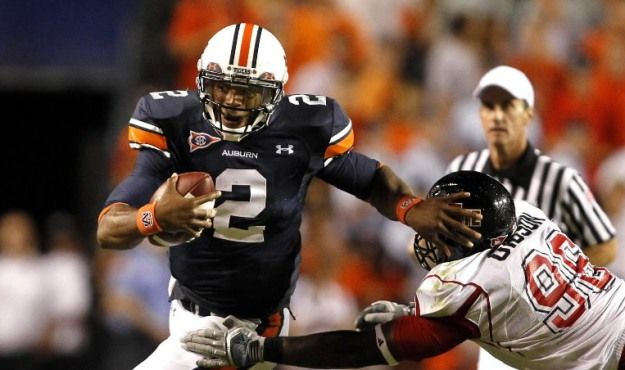 This isn’t a deep draft for quarterbacks. The teams at the top of the draft were very disappointed when they found out that Stanford’s Andrew Luck had decided not to come out this year. Right now Heisman Trophy winner Auburn quarterback Cam Newton is the talk of the draft. He’s the wild card who could impress scouts enough to move all the way up the top of the draft.

After looking at footage of Missouri quarterback Blaine Gabbert, I wasn’t impress with him. He played in a spread offense, so he needs to make some adjustments to the NFL game. I like Newton and his upside over Gabbert. I know Newton has a lot to learn but he’s got the intangibles such as leadership abilities, playmaking ability and winning ways.

There’s been controversy and scandal surrounding Newton all year long, but he performed flawlessly under the pressure while leading the Auburn Tigers to the National Championship.

Mike Mayock has Jake Locker ahead of Newton on his draft board and I don’t see how because Locker couldn’t throw the ball in the ocean. His accuracy is non-existent. Ryan Mallet of Arkansas has to explain the drug-use rumors. Christian Ponder of Florida State is another youngster who needs to prove he can make the throws.

Which Movie Should Get The Best Movie Oscar?

I prefer a couple of other QB’s who are not listed
I think Mallet and Locker make too many very poor decisions with the ball and are not Athletic enough to get away from pressure to extend the play which in todays NFL is a must.. I see both of these guys similar to a Chad Henne/Joe Flacco Types.. Big, Stong, with big arms but don’t know how to use it or to protect themselves and lock in too much to 1 Receiver

Other QB’s I prefer who may turn out to be better NLF QB’s
#1) Colin Kaepernick – Nevada 6-4 225lbs (A great athlete who if he gets good coaching with the right team to work on his inconsistent mechanics, could be a real diamond in the rough. He’s fearless with great fewet and able toextend plays and a Natural leader.. Projected 3rd-4th Round)
#2) Andrew Dalton – TCU 6-2 215lbs (A leader who knows how to win, not the biggest guy,strongest aram or best athlete, but has a good pocket presence and is very accurate on the short to intermediate throws Projected 3rd-4th Round)
#3) Rich Stanzi – Iowa 6-4 225lbs – (3 year Starter for Iowa playing in the touch Big 10. A solid arm and accurate, not the quickest of feet and reminds me a lot of a Kyle Orton type who can read defenses and get rid of the ball quickley and again with the proper coaching and team could be a surpise player in a year or 2 Projected 4th-5th Round)
#4) Pat Devlin – Delaware 6-3 225lbs – (A 2 year starter from a winning program, a great leader, and a little quicker with his feet than he looks, a good but not great arm who accurate in that short to intermediate range, Could develop into a nice back-up/spot starter for someone (5th-6th Round)
#5) Mitch Mustain – USC 6-3 205lbs – (A highly recruited kid from HS who went to Arkansas and then left for USC during the Coaching Changes and never was able to be a Starter at USC.. Strong arm and able to move pretty good, does not have much playing experience the last 2 years and would be a project for any team,but the kid is very talented and could be like a Matt Casell type in the right setting with good coaching (Projected 6th-7th Round)
#6) TJ Yates – UNC 6-4 225lbs (a 2year Starter for the Tar Heels who played under Butch Davis in a Pro-Set Style Offense, A big Strong arm but needs work on accuracy and coverage reads and footwork.. I think he could blossom into a QB to compete as a Back-up/Spot Starter within 2-3 Years and reminds a little like Phil Rivers when he was coming out..(6th-7th Rounder)

I would actually place Ponder 3rd on that list. He seems like he would be ahead of everyone on the list barring his surgeries (2 surgeries in fact) Major question marks about him coming back from those injuries, but then again there are major questions about everyone of those guys.

If I were to rank top 5 QBs most likely available for this upcoming season:
1. Blaine Gabbert – Most likely is the first pick off the board. Clausen Sucks
2. Cam Newton – Most likely going 3rd to Buffalo
3. Kevin Kolb – Kolb doesn’t have the upside that those two guys have but he is the most likely QB available to make a huge impact
(Most likely going to: Cinci, AZ, or San Fran)
4. Chris Ponder – Washington Redskins look over his arm troubles n draft him
5. Vince Young – I think Miami Takes a chance on him here

Maybe Ryan Mallet and Locker fall to the second round and get picked up by teams such as: Tennessee or Minnesota and even though both QBs will most likely start a few games next season I expect them both to become the Jimmy Clausens of the world.

I have Questions about B Gabbert who played for Missouri with that Spread Offense and taking most snaps in the Shotgun formation with 3 & 4 WR’s … He’s big and has pretty good feet and moves around well, but can he play behind center or will he be like a Chase Daniels was a couple years back with Great College #’s but have a hard time adjusting to the Pro Style
I think Mallet/Locker have Decision making and reading coverages issues
Ponder as a 2 year Starter with FSU was very up and down in his College Career but does have some leadership qualities and Cam Newtown who is a phenomenal athlete but has lots of questions about learning/running an Pro Style Offense…
I really don’t think there are any 1s tYear Starters out of this bunch and mostly back-ups/Spot Starter types 2-3 years down the road.. I really don’t see a whole lot of difference between these Top 5 and the other QB’s I listed who are probably the next best batch and could be had in the 3rd/4th/5t Rounds…
With the Defensive Side of the Ball very Deep in quality and quanitiy, If am a team like the BIlls,Titans,Cardinals,Panthers,Vikings,DOlphins, 49ers,
I go after the Best players on the board to fill other needs on the team and the grab a 2nd Tier QB in the mid-rounds or see whoever drops for whoever they end up selecting will be a 2-3 Year Process before they see any returns from that player most likely….