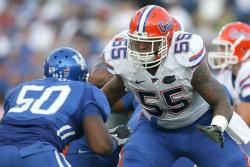 Team President Howie Roseman confirmed that thinking when talked to the media yesterday in Indianapolis prior to the NFL combine.

“The talent level overall is probably better than it has been the past few years,” Roseman said. “It’s deep. You have some guys who are versatile, who can play tackle, who can play guard. Obviously, that helps.”

The General Manager let us know that the offensive linemen which they will consider drafting will be able to pass block.

“We like to throw the ball in Philadelphia, and for that they’ve got to have good feet, good athletic ability, be able to move,” Roseman

Ben Ijalana of Villanova has the ability to play both the guard and tackle spots. The same is true of Florida’s Mike Pouncey. Tyron Smith of USC, Nate Solder of Colorado, Gabe Carimi of Wisconsin, and Anthony Castonzo of Boston College are all in the running for going in the first round at the offensive tackle position.

I think one of these guys will be a Philadelphia Eagles.

Paulman’s Picks for OL that fit the Eagles scheme well

i say stay put and draft pouncey if hes there , but if the kids a guard draft him to be a guard , ala center or tackle , they say it all the time we project him to be a tackle . draft the right guy , at the right positition and he will be yours like t thomas , herrimans , mayberry.

In the 12 years of Ried drafting exactly 1 offensive lineman has been taken in the first round – S Andrews.

Nev – your ocmment makes no sense – Hermanns was a Div II offensive tackle, that started as a rookie at tackle due to injuries and moved inside to guard, S Andrews was a tackle, and he moved inside to guard and was at one point one of the best guards in the league. McGlynn was not a center in college, and he did a decent job at center this year. Your comment is too cliche and not supported by the fact most teams can only afford to keep 9 to 10 OL on the roster, and then you can only dresss a certain number on game day, the O Lineman have to have versatility. The Egales like tackles – why – typically college offensive tackles are the best offensive lineman on college football teams – usually the biggest, strongest and most athletic (and I was a guard so it kills me to write that).

I disagree the Eagles have ‘severe’ needs on the O Line – they have one need – at Right Guard. They can solve this need in several ways. 1) Draft or free agent a right guard 2) Draft or FA a right tackle and move Justice down to RG
3) If Jamal Jackson is healthy – shift McGlynn to RG – but then you have the issue Jackson or McGlynn getting hurt – so you would still need to draft a Guard/Center type ass the backup

The O Line was solid in the run last year – McCoy had an excellent rushing year – we just didn’t run enough. The lack of running lead to teams defenses ignoring the run and going after Vick – we were not strong in blitz reads. Fix the problems we have, don’t make up new problems that don’t exist. Balance the pass/run ratio, work on reading blitzes and getting ball out quicker and that QB sack total should drop. Get a better right side of the line – should be in much better shape.

You r finally coming around Paul. Pouncey is the man. Navy – doing great, thanks. You REALLY happy with the King on Vick’s blind side?

Let’s hope they have better success with the O line than they did with the D line.

If I had my dream….. I would shift Justice inside to guard and draft the the large individual from Wisconsin. If J Jackson is back, McGlynn can be the B/U Center/Guard. I do want to see how the Howard guy we read about so much last year is developing. Dunlap has gotten bigger each year and he was only a 7th rounder, see if he continues to improve.

Forget all the shifting, Draft Pouncey as your right guard, Put Jackson back at center and pick up a good proven RT in FA considering thats now the most important position on the O-Line, Dont have time to experiment or play games no more.

As of right now, I am strongly in favor of them drafting Pouncey. As I’ve said before, Vick is our number one asset and if we can’t protect him, there is no way he will last a full season. I don’t think there is much out there in free agency and who knows when FA will start. Eagles need to get Asomougha or Ray Edwards in free agency.

Navy – Justice has to be a question mark now, as to some extent Jackson is. If birds are going put all their money on Vick, got to protect the dude. You are more of the football guy then me, but the King seemed OK and agree, was improving. And have to dig that wingspan, but still – blind side OT?

watching combine, costanzo is very athletic for a big man, this should be the eagles first pick if available