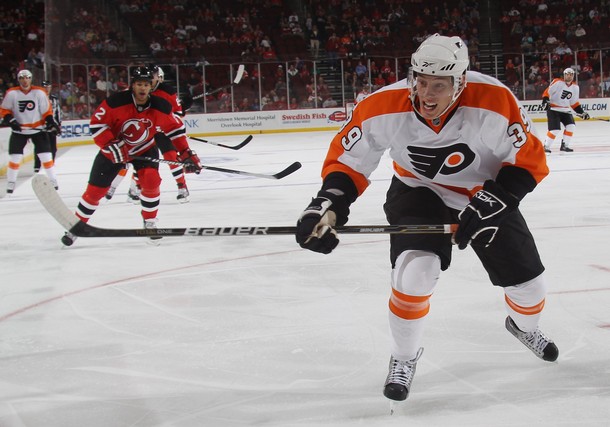 Last year, the Flyers had given up their first and second round draft picks in their acquisition of Chris Pronger. Their first pick in the 2010 NHL draft was Michael Chaput, who was traded on Monday to the Columbus Blue Jackets for Tom Sestito.  Having traded away all of their picks before the fourth round in the 2011 NHL draft, the Flyers have elected to sign two OHL players to entry level contracts to fill the void.

Akeson, of the Kitchener Rangers, currently leads the OHL with 103 points (24 goals, 79 assists) in 59 games. Give management credit for at least picking out potential in the undrafted community. As a 5’-10”, 20 year-old right winger with good passing sense, he’s a decent pick-up considering the Flyers have the center position fairly locked up for the next three+ years.

Brown, 21, has put up his best season with the Plymouth Whalers, notching 24 goals and 30 assists in 59 games played. As a comparison, Phantom Mike Testwuide had 21 goals and 10 assists in his senior year with the Colorado Tigers.

Testwuide was compared by the organization to Mike Knuble when he was first signed. As we all learned this season, undrafted players take longer to develop. Testwuide’s eight goals didn’t come until after the first half of the season, and I wouldn’t be surprised if it takes Brown just as long to adjust next year.

Whereas Akeson may have potential after two seasons in the AHL to make the jump, Brown likely serves more of a role as a serviceable center in theAHL.

Only time will tell how these signings will pan out, but who knows? Maybe Paul Holmgren has found the next Sergei Bobrovsky.