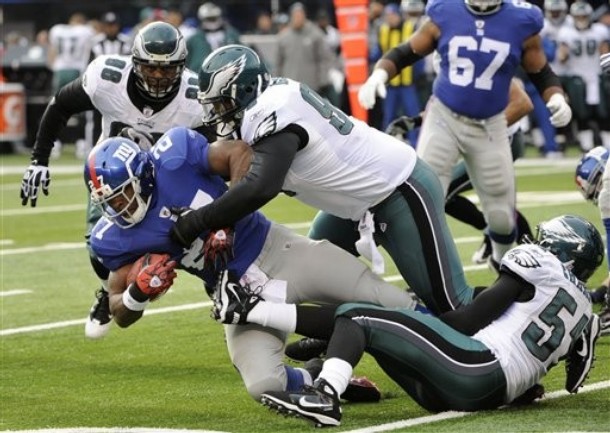 Eagles Head coach and Directors of Football Operations Andy Reid and Eagles General Manager Howie Roseman will continue their rebuilding of this football team this offseason. They must continue to make tough decisions about the personnel and that means giving some players a chance to be full-time starters; relegating others to a backup role and saying good-bye to others.

Backup safety Kurt Coleman, who was drafted in the seventh round showed us that he can be a starter for this franchise. The tackles he made on Pro Bowl running back Adrian Peterson just wowed me and he’s a guy who can put fear into opposing players. We need physical safety back there to play along side Nate Allen because the second round pick is more of a ballhawk.

Coleman reminds me of J.R. Reed when he was healthy. After J.R.’s foot injury a number of years back over a freak accident he suffered while jumping over a fence, he wasn’t the same player. Coleman is surprisingly quick to the ball despite not running a fast time at the combine.

Middle linebacker Jamar Chaney could be headed to stardom. Next to Michael Vick’s return to Superstardom, Chaney was the best thing that happened to this ballclub. Need I say more about him.

He’s a ball hawk and can be the key to this Eagles defense to make things happen. The rookie made big plays to force turnovers in the New York Giants comeback win and the Green Bay Packers playoff game. You can’t emphasize enough a player making big time plays with everything on the line.

If we get Stewart Bradley back to 100% this season and put him at Sam linebacker. We would have Chaney in the middle and either Moise Fouku or Keenan Clayton at the other outside linebacker spot, and I believe the linebacker question which has haunted us for many years will finally be answered.

much better than the other two guys we drafted in the 1st round. Unfortunately, Brodrick Bunkley and Mike Patterson are average but not dominant defensive tackles like B.J. Raji and Ndamukung Suh.

We need a dominant guy in the middle like Albert Haynesworth or a real bowling ball type guy who could get penetration into the backfield on running and passing plays. Maybe the injury-prone Kris Jenkins, who was released by the Jets could be someone the Birds might be interested in. You know how they love getting players who are coming off of injuries!!!!!

Trevard Lindley has great upside with great speed and good size but he needs time to learn to play the NFL game. He’s physical and can hopefully learn from a coach like new cornerback coach Johnnie Lynn. We need him to be a major contributor this season, which means he’s got to learn the system.

– Nick Cole…… He’s been in and out of the lineup for the last few years. The Bears are very interested in him and he’s been up and down in his performances through the years in Philly but his knee problems has been a great issue as of late and he should go elsewhere…….

– Max Jean Gilles…… He’s average at best because he feet are slow. He’s not a good pass blocker and this team loves to pass. He doesn’t fit here. I think Philly can get someone else who can replace him and he will not be missed. He’s like Artis Hicks. Did we miss him when he left???????

– Fonoki Tutupi……. He’s never played and there’s obviously a reason why. A guy can’t sit on the shelf forever. Good-bye.

– Akeem Jordan…… He’s a solid guy who is physical at times and a contributor on special teams but his playing time fell off after an injury and Moises Fokou had a decent season. It’s times to say good-bye. He’ll be somewhere else next season!!!

– Omar Gaither…….. He’s a player who is smart but just not athletic enough to play against faster tight ends and running backs…….

He will not be missed in Midnight Green…

– King Dunlap…… He did okay when got opportunities. I know guys are going to say ”he did better”, but he’s just too tall and lanky. Guys like Julius Peppers or Dwight Freeney will just eat him for breakfast, then get a free shot at Michael Vick. We’ve worked with him long enough. The arrest for reckless driving and disorderly conduct won’t sit well with Andy Reid. Good-bye

– Jorrick Calvin……. He’s a young kid but I don’t see the Eagles keeping him around this season. The Birds will draft a guy who can do a better job of returning kickoffs and punts. I could see them drafting a guy like Noel Devine in the late rounds. Who knows they may grab him as early as the 4th round.

– Chad Hall…… He was okay this year but he doesn’t have a speed of a guy like Danny Woodhead of New England. Hall is versatile in that he can run with the ball like a halfback but also run routes and catch the ball like a wide receiver. He’ll fit in a system that will make him successful like in Miami with wildcat schemes that will better suit him!!!

– Juqua Parker….. Yeah I said it. He’s a good player and for him to be 33 years old and the second best defensive end on this team is quite an accomplishment. I think the city is ready to see if Brandon Graham can be that additional dominant pass rusher we need this season. They can let Darryl Tapp take over for Graham until he returns. When the number one pick returns, Tapp will slide back into the third defensive end role. I also see us drafting another defensive end who can be the 4th defensive end for this team……

There’s more but we’ll see how they’ll pan out……..

Amaro On Utley Injury Being More Than Tendinitis: “Perhaps”….