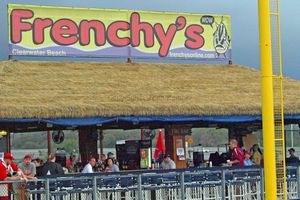 Spring Training for Phillies fans has turned into a celebration; it is the place to go to celebrate being a fan of this team. It is the first chance fans have to publicly display the feeling they had when they were sitting in their underwear watching ESPN’s SportsCenter and saw the Phillies had signed Cliff Lee.

Spring Training is here, and the fans are celebrating it, but for fans visiting Clearwater for the first time, the question is “where?”.

Frenchy ‘s Tiki Bar in left field inside the stadium is a good place to grab a beer or two after the game, but at six dollars per beer it is not recommended to grab beer number three there.

Fans that plan to begin the party after the final out should take a trip over to the Tilted Kilt which is located just across the parking lot from the stadium’s south gate.

The Tilted Kilt is a classier version of Hooters. The food is way better, and instead of the standard Hooters outfit the waitresses are wearing a school girl outfit a few sizes too small.

Fans that want to get away from the stadium and back to the beach should begin their night at the Palm Pavilion. The Palm Pavilion is located directly on Clearwater Beach with a phenomenal view of the sunset. The Palm is the place that fans have a chance to run into a few Phillies and Phillies broadcasters. The Palm has live music at night and standard bar prices, not too expensive but not too cheap.

A younger Phillies fan might be excited at the thought of sharing a drink with Gary Matthews but if that fan intends on sharing a drink with a woman younger than his mom he better go elsewhere because the crowd at the Palm is mainly between 35 and 55 years of age. It is a decent bar for younger Phillies fans to drink during the day or grab a pre-game meal, but this will not be the bar with wild spring breakers.

like the type of club featured on MTV’s Jersey Shore, but instead of Snooki dancing on stage they have much better looking women dancing in bikinis.

The Drink specials are easily the best in Clearwater; on Thursdays during March, Sheppard’s offers a $15 dollar all you can drink wristband that lasts 9 pm until close. The place is packed with plenty of friendly girls on spring break, but be warned it is also packed with plenty of guys who wear their sun glasses at night.

Fans that intend on partying at Sheppard’s should get there between 9-10 pm to avoid waiting in line to get into the club, but for those that do not get to the club until later the line can be avoided by using the tiki bar entrance and entering the night club through the patio.

Fans should never drink and drive no matter where they drink. In Clearwater Beach there are plenty of Police Officers patrolling the streets at bar close which means plenty of chances for fans to get a DUI and ruin their trip. Fans that are staying too far away to walk home from the bar should call either Yellow Cab Company or United Cab Company both charge about 2.75 for getting in the cab and 1.75 per mile. Stay away from the 1950’s style cabs they seem to get “lost”.