With 3-2 Win Against Panthers, Flyers Look to Turn Ship Around 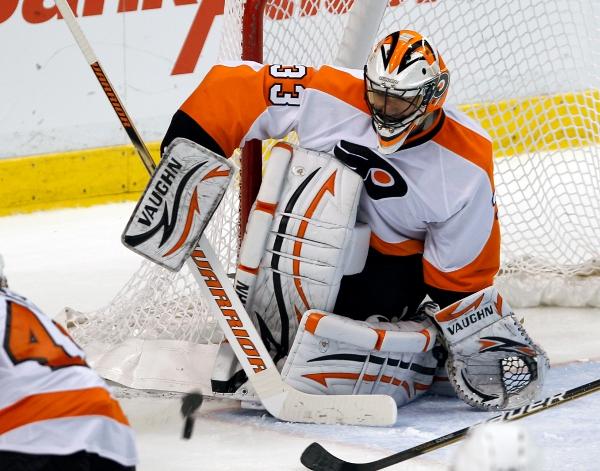 After Saturday’s frustrating overtime loss to the Atlanta Thrashers, the heart and soul of the Flyers was put into question. While none of the games ahead would be considered “critical” for the Flyers to make the playoffs, the team will have a better chance of success if they get “hot” heading into the post-season.

Tonight’s road game against the Florida Panthers started on completely the wrong foot, with the Panthers controlling the puck in the Flyers’ end for about five minutes. Mike Richards and Scott Hartnell, playing on a line with Ville Leino, took the lead after a smart play by Richards took advantage of a sprawled out Vokoun.

The Panthers controlled the remainder of the period, scoring two unanswered goals to grab the lead. Coach Peter Laviolette switched up his defensive pairings frantically to find something that clicked. Heading into intermission, it looked as if he had lost the team.

It’s amazing what can happen in between periods.

Pulling a complete 180, the Flyers dominated the rest of the game despite persistent efforts from the Panthers to stifle them. In particular, the new line of Claude Giroux-Jeff Carter-Danny Briere led the Flyers with two goals to capture the lead.

Heading into the game, I was concerned about Lavi’s decision to put together a line with three centers again, as the Richards-Carter-Giroux line was awful in the one game they played together earlier in the season. I think part of that is because Richards’ style of play is less complementary to the other centers.

The fourth line looked poor in the first period, on the ice for both Panthers goals. As the Flyers get closer to the playoffs, Lavi should begin to lessen Jody Shelley’s presence in the line-up for players who will be more useful in the post-season, like Andreas Nodl.

James Van Riemsdyk also had an awful game. He took all three non-fighting penalties for the Flyers, including a four minute double minor penalty. I’d like to see him back with Richards, but that leaves the question of who to center Leino and Hartnell if the other three centers continue to play together.

Brian Boucher was given the start in net after Sergei Bobrovsky let in 5 goals on Saturday. He wasn’t outstanding, but he got the job done. With only 22 shots from the Panthers, he wasn’t tested as much as Bob was.

The defense, sans Chris Pronger after it was determined he had chipped the bone in his hand, looked decent. Sean O’Donnell had a better performance after looking gassed in his last six appearances. With rookie Erik Gustafsson recalled from Adirondack, the expectation is that he will get some ice time at some point during this three game road trip. In all likelihood, Nick Boynton will be the odd man out, but it’s possible O’Donnell could sit.

The Flyers will get their shot at vengeance against the Thrashers on Thursday. If the Flyers can keep up the pace they held for the last 40 minutes, there’s a chance they could turn this ship around.