Would The Sixers Have Any Chance Against Boston In The Playoffs? 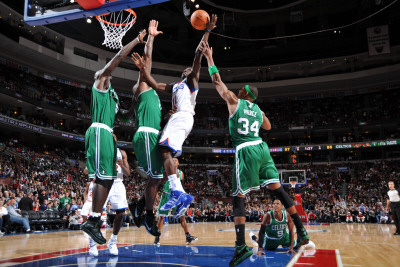 Unlike the Sixers, we can look ahead to a couple of probable playoff matchups next month. The Sixers are currently sitting in the 7th seed and would face the 2nd seeded Boston Celtics if the season ended today.

Over the next two days, we’ll take a look at that matchup and other scenarios that would include the Chicago Bulls, Miami Heat and the Orlando Magic.

The rivalry between these two looks to be renewed with all three games being decided by 5 points or less, including a Sixers win last week.

However the NBA Playoffs are a different animal.

The Celtics kick it into another gear defensively between mid-April and June. I think the Sixers could only go five games games against the C’s.

O’Neal, Nenad Krstic, Jermaine O’Neal and Troy Murphy. Too much depth and with the newly acquired Murphy too much firepower.

3. Youth vs. Experience, several of the Sixers losses this season can be chalked up to lack of experience, this series would be a painful lesson in that department.

4. The Playoff lights get a little hotter: More than half of the Sixers roster doesn’t have playoff experience while the Celtics are a grizzled bunch of veterans.

I see the Sixers winning Game 3 in Philly and dropping Games 4 & 5. The Celtics would really overwork the Sixers in the paint and run the guards ragged. Brand, Hawes and Speights would be overmatched and there would be some relief in the form of Thaddeus Young but that’s about it.

Jodie Meeks, Lou Williams and Evan Turner will spend the series running through picks and screens trying to keep up with Ray Allen and of course Andre Iguodala would have his hands full with Paul Pierce. Jrue Holiday matches up well against Rajon Rando but Rando is one of the great all-around point guards in this game and takes it up a notch in the playoffs.

Talor Battle Will Be Too Much For Temple

call me crazy but the Sixers can wear down the aging Celtics with their youth and speed and beat them in a long series….

Did you really ask this?

The Sixers might win one game. I think the Celtics will win the title this year.

The Sixers need a star and a center.

Overall i am pleased with their development after what Eddie Jordan did. Call me crazy but i like Denver to get to the Finals too.

I mean seriously, why is this even a question? The Celtics will be looking forward to their second round matchup as soon as they see they have to play us in the first round.

If they match up well with anyone it would be the bulls since out of the top 3 teams they have the least amount of playoff experience as a team whole. But I like the place the sixers are positioning themselves in. If they keep this up they may make it as high as the 5th spot

EBG, I’m going to do a preview of a potential matchup with the Bulls/Heat and possibly the Magic in the next couple of days.

These are potential Sixers matchups against the Bulls, Heat and Magic. Didn’t mean to confuse anyone.

@Ron Glover, yea I know and good article. I mentioned the bulls bc they may be 1st in the east but they have the least amount of playoff experience out of the top 3 and match up well with the sixers besides them having to deal with superstar D Rose, but noone in the league can stop that man